Update on the Primates Meeting in Egypt 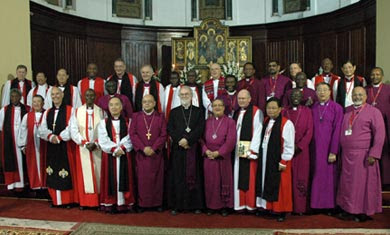 The Living Church has an overview of Day One (yesterday) of the Primates Meeting now underway in Alexandria, Egypt. Here's an excerpt:

The official agenda, which was finalized on Saturday, changed Sunday to a meet-and-greet day, pushing back the first business session to Monday. On Sunday, the primates gathered in a Palestine Hotel conference room for prayer and conversation—what one staffer called a “mini-indaba.” After an afternoon introductory session, the primates were scheduled to take part in a 4:30 p.m., service at St. Mark’s Anglican Church in central Alexandria’s Liberation Square. The colonial-era church will be re-consecrated as a pro-cathedral of the Diocese of Egypt, and a formal group photograph was to be taken of the gathered primates.

At the last primates’ meeting in February 2007, a number of primates declined to receive Holy Communion due to their theological differences with Presiding Bishop Katharine Jefferts Schori. A group photograph outside the Zanzibar Cathedral also was cancelled. Bishop Jefferts Schori is not scheduled to arrive in Alexandria until early on Monday morning.

Representatives of 35 of the Communion’s 38 provinces will be present during the course of the five-day meeting. Two of the primates—the Most Rev. Samuel Azariah, Moderator of the Church of Pakistan, and the Rt. Rev. John Gladstone, Moderator of the Church of South India—will not be attending due to scheduling conflicts. The Most Rev. Edward Malecdan, Presiding Bishop of the Episcopal Church in the Philippines, was refused a visa by the Egyptian government and will not be able to attend.

Is +Schori the only Primate to arrive a day late?

She's the only one to have been mentioned in the press, as far as I know.