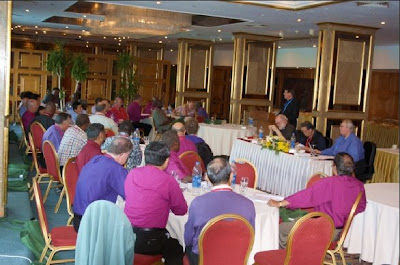 Listen towards the end of the press conference as we hear Archbishop Daniel Deng Bul of the Episcopal Church of the Sudan repeat his courageous call - and the call of his province - for the resignation of the Episcopal Bishop of New Hampshire.

In fact, Archbishop Daniel (who, along with the Archbishop of Nigeria, was nearly barred earlier this week from entering Egypt for the Primates Meeting) tells the media -- to what appears to be the Archbishop of Brisbane's alarm -- that this issue has indeed come up for discussion amongst the primates.

This repeated call comes after an intensive lobbying effort by The Episcopal Church (USA) last summer at Lambeth to court the Church in the Sudan into quiet compliance. Despite the major crisis of epic proportions in his country which he speaks to earlier in this press conference, Archbishop Daniel does not back down from his biblical convictions, even now.

We don't think the media are assembled in Egypt just to listen to talk about global warming.
Posted by Unknown at 7:12 AM

TEC's "unique polity" argument falls apart on the election of a Bishop manifestly objectionable to the wider communion and global Christianity.

A Bishop, by definition, functions as part of the greater church and can't be defended as a "local option".

Good for The Sudan. May God bless and prosper their ten year plan to renew their hurting land.

Of course you also have to love the irony here. It was less than two weeks ago that we discussed approval of blessing same sex unions and ordaining people in same sex relationships at the Diocesean Council (Convention) in Virginia. At the time it was brought out in public that to do so would endanger our strong ties to the Sudan. Virginia has strong ties indeed, and has missionaries over there this month to work.

So what about the change in theology? We were told in bold,nay, as you will recall BB,we were told in what one might say strident measures by a missionary who has (God bless her) spent time in the Sudan that the people over there, the church over there would not care one bit about this issue. Not one bit. Cue applause.

Ooooppssss. Someone get the Rev. Lauren Stanley on the phone and ask for a comment. Or a retraction. Seems the church there does care.

[cue irony] Maybe it's we who do not care what anyone else says, we're right and we know it. And we're going to be Anglicans and no one can throw us out. So there.

"Covenant? Covenant? We don't need no stinking covenant." [irony off]

Oh dear, I wonder what all the Londoners (including Anglican church-goers) shoveling snow this week and not for the first time this season think they should do about - global warming??

Arch Daniel had only talked about the civil war tearing his country apart up to the point that David Virtue asked him about the ONE and ONLY issue David Virtue is interested about: homosexuality, homo-eroticism, homogenitality and God knows what else, and how can he make something out of it in the church he claims to serve and yet only seems to suck blood and the worst instincts from.

And I'll tell you even more: the right wing fringe that Virtue's site caters to is all but in open revolt against ALL the primates over what they consider to be their drinking of Williams' kool aid. Yeah because that's one figure of speech they don't seem to be able to upgrade.

In a similarly pathetic stride, your only mention of the CIVIL WAR tearing Sudan apart only comes because of your similarly insane obsession with all things homosexual. You don't seem to care about what's going on in the Sudan -just look at your own emphasis on it, or lack of it- and yet you use it as an argument to perpetuate your homophobic, biblically opportunistic, hermeneutical-sexual superstition.

Get over it: Williams led, Akinola-Venables-Orombi are singing to his tune and the primates' meeting has spoken: ACNA is not happening and Duncan will have to keep buying his archepiscopal regalia off the internet. Put that in a pipe and smoke it.

O and may God keep you whole.

Leonel, why so warm and fuzzy today?

Weaseling your way out of it won't make you stop being who you are.

Nor will it make untrue that at Alexandria, Arch Daniel ONLY mentioned the word 'homosexuality' (after having poured his heart out in pain for the people of Sudan being martirized, as we speak) because David 'gimmenewsabout sex please, pleaaaaaase' Virtue couldn't help himself but blackmailing him into it.

Warm and fuzzy? Not to a superstitious homophobe like you.

Careful, Leonel, Hagrid is looking a bit, well, testy. As you may know, pies are to be eaten, not tossed.

As you know, DavidV is doing his job - which The Guardian followed up on by the way, just as Colin was there to do his. The press conferences were designed to divert attention away from the presenting issues that we all know are tearing apart the fabric of the Anglican Communion. Anyone who has lived in DC for five minutes knows that. That it's done on the back of the Sudan is just reprehensible and Archbishop Daniel understands very well what's going on with the overtures from The Episcopal Church. He did not hesitate in answering DavidV's question (nor did the Guardian ignore the answer) - it was the Archbishop of Brisbane who quickly concluded the little soiree less any other journalist got some ideas.

Colin had his own way of networking and lobbying during his time at the Primates Meeting - and God bless him, that's what liberty is all about.

Enjoy the pies, but please don't throw them lest Hagrid get a bit fiesty. I understand the frustration - the Primates did recognize the Anglican Church in North America's establishment and the great desire of a hundred thousand people to remain Anglican. You should take heart that the Presiding Bishop isn't going to do a darn thing about it and stall and stall until she's out of office (note the year she's said TEC will get around to looking at the Covenant, it's almost laughable). Stall and Delay is almost a religion in DC - it would make a great name for a lawfirm, because that's what they do too.

However, I don't think it's going to work (see Phil Ashey's insightful commentary on the Communique here). If the scheme had a chance, why then throw pies?

My my -- such a bitter man is Leonel.

RE: "Leonel, why so warm and fuzzy today?"

Exactly. It's a privilege to be called names by someone like Leonel, BB.

I wish I could be so honored.

Thankfully, only attempted insults occurred -- not actual insults . . . since being called a "homophobe" by the likes of Leonel is a huge compliment.

Sort of like being called a "terrorist" by Pol Pot or a Marxist dictator by Stalin.

Carry on, BB -- you've clearly got somebody riled up . . . although I suspect it's rather easy in his case.

Oops, Hagrid (and if you don't know which table he is at, then more's the pity) has just tossed our cranky friend out the door.

And of course, Dumbledore (if he were yet living) would always be welcomed at the Cafe. ;-)