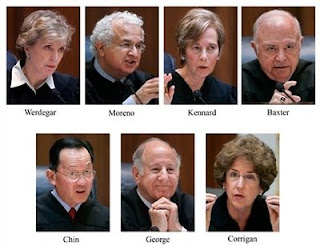 Can I just state for the record what a blessing it is to have Anglican Curmudgeon online? He hits yet another one out of the park with his analysis of the correction handed down by the California Supreme Court to their earlier ruling - thus clarifying that the California churches can now defend themselves in open court. What they have ruled is that it can't just be dismissed one way or the other - that everyone is now going to have their day in court. That's good news.

Here's an excerpt from Curmudgeon's post "Rushing to Judgement":

I explained in this earlier post what was wrong about the Court's original opinion. Briefly, the Court said it was deciding "the merits" of the case---before the defendants in the case, the individual parishes in Orange County who had each been sued first by the Diocese of Los Angeles and then by the Episcopal Church (USA), had even answered the complaints! Just like any other branch of government, courts cannot deprive people of their property without following "due process of law". One does not have to be an attorney to appreciate that if you are sued, you get a chance to answer your opponent's complaint before anything can be decided in your case "on the merits".

The error must have been at least a little embarrassing for the justices and their law clerks. In their zeal to render an opinion in the case, they literally rushed to judgment by purporting to decide the case "on the merits". The latter is a legal turn of phrase meaning that the case is decided squarely on the facts presented to the court, instead of being brushed aside on procedural or technical grounds that do not resolve any of the factual or legal issues raised. Normally, therefore, one expects a decision "on the merits" at the end, and not at the beginning, of a case. For the Court to assume it could decide the merits of the Episcopal Church Cases before the churches themselves had even an opportunity to answer would make it look as though the justices were biased, or had prejudged the case to such a degree that they did not even need to hear from any of the defendants. In other words, they would be saying: "Our minds are made up---don't confuse us with the facts!"
Now let us take a look at how the Court has gone about stepping back from its mistake. The modifications it made may best be understood by presenting the text of the original opinion below. Then, by using strikeouts for deletions and underlining for new language, I show just what the Court decided to change in order to avoid any appearance that it was prejudging the case.

Please, please read all of "Rushing to Judgement" here. What we see is that the case will now be tried in open court. And a lot of water has gone under the bridge since this case first started. Now it really begins.
Posted by Unknown at 11:53 AM

As always, I will remain hopeful, and pray. Wish there had been some decision overturning TEC's deliberately freezing the assets of the churches in question, which denies them the ability to use their resources to defend themselves in court.

bb, yet again, you're way off base.

"(though one does wonder whether the California judges read Randy Bellows rulings in Virginia - which came out after they ruled - and thought, oops)"

1. It is ridiculous to think that the California Supreme Court cares about a Virginia trial judge's decisions about a statute that exists only in Virginia (and is completely irrelevant to California).

(You are, I suppose, misconstruing entry of the final order in the Virginia cases on January 8, 2009. That is an essentially clerical task among the lawyers, and all it does is sum up the nature and effect of the rulings already made.)

"The case hasn't actually been argued at trial yet in California - that is yet to come."

There won't be a trial in that California parish litigation. Like federal courts and courts in other states, but unlike Virginia, California courts use summary judgment.

1. You think it's ridiculous? Do you know who Judge Bellows is and what he is best known for?

2. Yes, that is exactly what I am talking about - the Final Order that came out days after the California ruling.

3. One would hope in California that defendants may still have the right to a fair and open trial. Your posting tells us all that it will be The Episcopal Church's intention to block the defendants their right to a trial by pursuing a summary judgment.

4. Anon, you are offering your opinion as well and you are welcome to do that. It is naive to think that the California Supreme Court is unaware of the Virginia rulings. What happened in Virginia is that it showed that this case is not the "slam dunk" that The Episcopal Church maintained in California (and attempted to maintain in court in Virginia). That is precisely what the California Supreme Court had to revisit after their initial ruling. They left the impression - which is what TEC would like them to do - that this case is a slam dunk, when it is not, as the Episcopal laity are now figuring out in Pittsburgh so that the Shadow Diocese is having to write letters to defend their own legal strategy as well. The Episcopal laity in the pews appear to be waking up that this is not the legal slam dunk as they have been repeatedly told. And that's what freedom and liberty are all about after all, isn't it?

If TEC wins these cases, it will be interesting to see how long the laity in the pews will continue to financially support the local parish. It is such an ill-advised legal and public relations strategy for TEC to pursue, but perhaps the Presiding Bishop and the diocesan bishops in question who are now nearing retirement (Bruno and Lee) figure that they will be long by the time the "you know what" hits the fan.

1. I take it you're suggesting that his participation in well known cases before he was a judge -- while an assistant US attorney (Hanssen, Lindh) and afterward (Wen Ho Lee) -- somehow makes his church property decisions of greater interest to the California Supreme Court. That's a fitting follow up to your original claim -- heaping an irrelevancy on top of the original irrelevancy that you still haven't responded to.

2. OK, so we're now clear that you're misconstruing things.

3. A civil litigant does not have a right to a trial. They have a right, of sorts, to have judicial procedures followed. One of Virginia's peculiarities is Virginia's procedure regarding motions for summary judgment -- it is different than the federal court system and numerous other states, including California. Outside of Virginia, it is not unusual for civil cases to be resolved by summary judgment motions, and that does not say anything about the litigant who got summary judgment except that they want to minimize costs and have a strong case. I am of the opinion that's what's going to happen in the California parish litigation in question.

4. The question here is not a California court's awareness of Judge Bellows' various opinions. The point is most of his opinions are irrelevant in California. And the part of his opinions that are relevant to California have been thoroughly rejected by the California Supreme Court's opinion (and the modification doesn't change that).

If the fact of litigation has not caused laity to stop supporting their local parish financially, why would TEC winning stop them?

Again, thank you for letting us all know that TEC will seek to deny the California Churches their day in court. Short term bet, long term loss.

Judge Bellows was a prosecutor in the Hannsen Spy case - he is well-known nationwide in judicial circles for his brilliant legal mind. He took the Virginia Churches case very seriously. One hopes that the California courts will show the same respect.

It is not clear why one must continue to say things that one might refrain from saying in polite company, especially when one is an Anon Guest. But we do have the David Blue Memorial Pinball Machine available just in case. Trying to do the best I can in what is still a tragic situation.

How do we know that the litigation is having no ill-affect on the growth of The Episcopal Church?

"Again, thank you for letting us all know that TEC will seek to deny the California Churches their day in court."

Nope. They'll have their "day in court." But I'm speculating it'll be a summary judgment hearing, not a trial.

"Judge Bellows ... is well-known nationwide in judicial circles for his brilliant legal mind."

Interesting how the judge that agrees with you just has to be the smartest guy around...

As Obama & co. prove almost constantly, one can be smart and take things seriously and still completely wrong.

There was nothing in my last post or this one that couldn't be said "in polite company."

"As Obama & co. prove almost constantly, one can be smart and take things seriously and still completely wrong."

Well, Anon, we have finally found something we can agree on. ;-)