Primates Meeting Update: The Archbishop of the Sudan and the Episcopal Church of the Sudan call for the resignation of the Bishop of New Hampshire 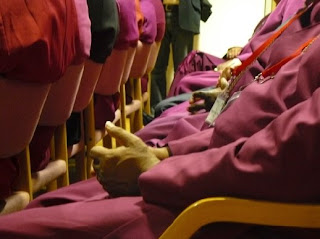 UPDATE: Unbelievable! Read The Episcopal Church's version of the story here - what is blatantly missing?

The Guardian has the story here.

There were renewed calls yesterday for the resignation of the Right Reverend Gene Robinson, the openly gay bishop of New Hampshire, and of the clergy those who consecrated him.

The demand came from the Archbishop of Sudan, the Most Reverend Daniel Deng, who last summer shocked Anglicans by issuing a statement condemning the 2003 decision to consecrate Robinson, a non-celibate gay man, and the US bishops responsible for his appointment.

The position was supported by the Episcopal Church of Sudan, which with has four million followers, 300 primary schools and 24 dioceses. It had previously remained neutral on the issue of homosexuality. The unexpected statement was of special concern for the US Episcopal Church, which enjoys close ties to the African country.

On the penultimate day of a meeting between the world's archbishops and senior bishops to address regional and international concerns, Deng was asked whether he had changed his stance on Robinson and the US Episcopal Church.

He replied: "We are asking that within the primates meeting and the situation on the statement remains the same. We have not deviated. What is needed is for churches in the Anglican world to wrestle with these issues so it comes to an end."

His comments could cast a shadow over the candid, yet cordial conversations that have been taking place between primates during the week. 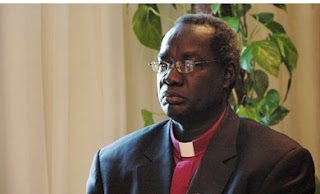 Delegates have described the atmosphere as constructive and collegial and a contrast to the rancorous and confrontational nature of their 2007 meeting in Tanzania.

Deng's comments will disappoint those who were keen to minimise public comments on homosexuality; he is the first primate to break ranks and reiterate the unresolved differences between some Anglican provinces and his response overshadowed his other appeal - for fellow primates to lobby their governments to press for peace and reconciliation in Sudan.

He said: "I strongly ask the Anglican Communion not to abandon the people of Sudan in this time of danger and uncertainty.

"I appeal to to above all do something so that the Comprehensive Peace Agreement may not slip away."

"There were renewed calls yesterday for the resignation of the Right Reverend Gene Robinson, the openly gay bishop of New Hampshire, and of the clergy those who consecrated him."

It would be the right and honorable thing to do.

However, given that Robinson is an egomaniacal prima donna, it would take a miracle for this to happen.

But then again, I do believe in miracles (but this one would take the cake!)

It's refreshing to know that at least one Primate has some [colorful metaphor] fortitude.

Thanks Be To God!

When will the others join in now?

What is the best way for individuals to support the Anglicans in the Sudan? Is there a Barnabus Fund project?

One of the best projects I know is Five Talents - and they will also be able to refer you to partners in ministry. You can read more about Five Talents here: http://www.fivetalents.org

If there were a chicken dinner offered it would be from 815 to Sudan, but it's so refreshing to see that with the possibility of great cost a stand for Christ is taken!

May the Lord richly bless the Episcopal Church of Sudan for their witness.