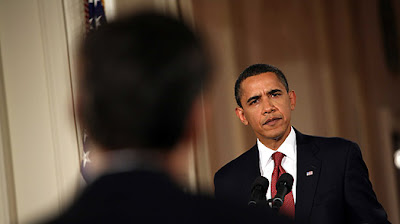 This little item is just in from the American Spectator:

The White House is looking to install a small video or computer screen into the podium used by the president for press conferences and events in the White House. "It would make it easier for the comms guys to pass along information without being obvious about it," says the adviser.

The screen would indicate whom to call on, seat placement for journalists, pass along notes or points to hit, and so forth, says the adviser.

Using a screen is nothing new for Obama; almost nothing he said in supposedly unscripted townhall events during the presidential campaign was unscripted, down to many of the questions and the answers to those questions. Teleprompter screens at the events scrolled not only his opening remarks, but also statistics and information he could use to answer questions.

"It would be the same idea with the podium," says the adviser. 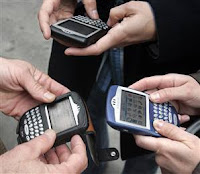 BB NOTE: No wonder the president wants to keep his Crackberry. Forget all about this teleprompter talk, though - those things are ready for the Smithsonian. Apparently what he needs is a presidential-version of Twitter. He could then go anywhere - anywhere media live - and his staff could just tweet him in seconds. Imagine the possibilities!
Posted by Unknown at 10:20 PM

Do I understand this to say that the President needs someone to guide him through a press conference - remind him what to say and who is in the room. Really?

As one who struggles with names, I'm not going to get on the Prez., in fact how do I get one?

Folks, get real. This article was from the American Spectator, not a reliable source for pro Obama information.
It was written by The Prowler, whoever he is?
President Obama needs help with ideas to fix what the last president screwed up not useless conjecture from right wingnuttery

Well, it is a very observable fact Mr. Obama gets tongue-tied when he strays too far from the teleprompter. He gets almost Bush-like in his impromptu inarticulations and remblings when he speaks off the cuff.

Think of this innovation as the modern equivalent of the lines prompter box build into the floor of a theater stage to help the actors when memory fails to deliver. Then think of Bill Ayers in the box giving Mr. Obama just the right spin on the latest socialist adventure this administration has for us all to enjoy collectively.

But, of course, this most brilliant man really has no shortcomings that need to be adjusted for, so it really would never be used that way. Would it?

Rick, after speaking so much bile you should feel sick.
I got sick reading it. President Obama is still trying to find a House Republican who puts country before party. I think Obama is wasting his time. He should go ahead with his plans and forget about reaching across to the rabid right

How kind of you to sit at Rick's table, John. It's quite bipartisan! Old Ogden's Fire Whiskey, though, is on the way, just in case.

John, every coin has two sides. Your perception of the House Republicans is different from mine. I look upon the House Republicans as patriots who are trying valiantly to save our country from its headlong rush to socialism. Not surprisingly, I also am disgusted with the votes of Collins, Snow and Spector as unworthy of even the low caste RINOs they are.

This is a typical right wing thought process- fighting old worn out battles.
We have a pragmatic president fighting today's problems.
Get on board or get out of the way.

I had better calm down. I have just returned home after a Communion service and potluck dinner with faithful Episcopalians.
The tornados missed us and God is still in charge.
Sleep well in His care

Whatever the source, the notion that the President needs a little screen installed, so he can be prompted during press conferences sort of changes the whole notion of a press conference.

I find it interesting that liberals from Obama on down are now describing conservative economic policies as "worn out" and "old", apparently in a hope that we will all buy it.

In fact, Cleveland, Coolidge, Kennedy and Reagan all succeeded in reversing economic down turns with these ideas. FDR is the only one in our century to attempt to use the methods being employed now and they failed miserably. So, the ideas might be "old", but I hardly think they are "worn out".