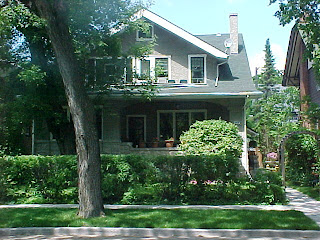 Very interesting story popped up about a visit to Neil Young's chilhood home today. Take it away Winnipeg Free Press:


Two Sundays ago, the day of Dylan’s MTS Centre concert, Kiernan and Regan arrived home between 4 and 4:30 p.m. to see two scruffy men who had arrived by taxi standing on the sidewalk outside their house.

“Oh, oh, Neil Young fan alert,” said Regan, who has become accustomed to such incidents in the six years they’ve lived in the amalgamated duplex at 1123 Grosvenor.

She went to talk to them while Kiernan lugged in the groceries. After he was finished, he walked out to chat, too.

“They were older than your typical Young fans,” Kiernan recalls thinking.

Nothing clicked until he noticed that one of the men had his black leather pants tucked into expensive-looking cowboy boots. He glanced up and studied the lined, unshaven face topped by a grey tuque and realized he was looking at Bob Dylan.

Kiernan kept his cool, while Regan, a project manager in the city’s permits department, remained oblivious. Dylan, 67, was curious about the house and neighbourhood as they related to Young. 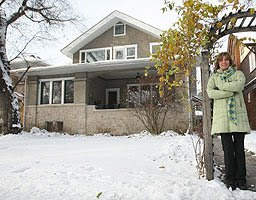 He also made small talk about the weather. Kiernan replied that it was unseasonably mild.

“You’re from Minnesota, so you know what’s usually like,” Kiernan said. “Subtract 10 degrees.”

Kiernan asked if they wanted to see inside the house, and Dylan was eager.

“How long do you have for the tour?” Kiernan asked, meaning the tour of the house.

“So this is where Neil would have listened to his music,” Dylan mused. They took him into the old second-floor kitchen, now a laundry room. “I remember thinking I should have done the laundry before I went out,” Kiernan says.

Kiernan explained the whereabouts of the Earl Grey and Crescentwood community centres, where a teenaged Young and bandmates played their first concerts.

“He was introspective and thoughtful,” Kiernan said. “He had an interest in music beyond himself.” 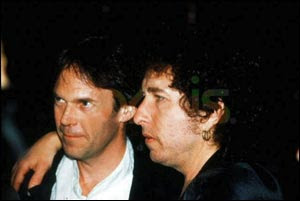 The connection - sometimes kindred, sometimes perhaps competitive (at least in the minds of some fans), sometimes who-knows-what? - between Bob Dylan and Neil Young goes way, way, back. Stories go around that one time Neil Young was playing loud on the radio and Dylan yelled from another room to turn it down. But when it came time to pen Highlands, he told the story a bit differently:


I'm listening to Neil Young, I gotta turn up the sound
Someone's always yelling turn it down
A snippet of Dylan's whimsically sardonic humor - masking his identity once again, Mr. Masked and Anonymous.

It has gone on for decades, there's no question about that - whatever it is, the comparison between the two is hard to ignore - though we certainly have our preferences around the Cafe. In fact, we remember this more than humorous recent "encounter" between Dylan and Young - or at least Dylan's encounter with Young's recent album, Let's Impeach the President. From USA Today:

Dylan aims to tell a truthful story and nourish it on stage. Keeping it real doesn’t mean copping ideas from CNN or responding to the conflict du jour, which is why you won’t find an updated Masters of War on Modern Times.

“Didn’t Neil Young do that?” he jokes, referring to the rocker’s recent anti-war disc. “What more is there to say? What’s funny about the Neil record, when I heard 'Let’s Impeach the President,' I thought it was something old that had been lying around. I said, ‘That’s crazy, he’s doing a song about Clinton?’”

Entire websites have been created that link the two great musicians, contrasting and comparing their music and careers. From Knappster:

The CBC News also has the story:


“OK, so this was his view, and this was where he listened to his music. It suddenly dawned on me, when you're looking at Bob Dylan standing in a hallway, that he had a very parallel experience 200 miles to the south, sitting in his room, listening to his music, looking out his window.”

Kiernan said Dylan and his manager visited for a while before heading off to tour other areas of the city.

Dylan then played a concert at Winnipeg's MTS Centre later that night, Nov. 2. 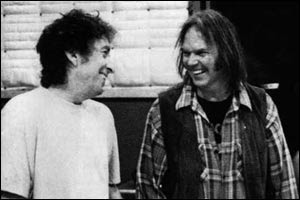 
"Neil is very sincere, if nothing else. He's sincere, and he's got a God-given talent, with that voice of his, and the melodic strain that runs through absolutely everything he does. He could be at his most thrashy, but it's still going to be elevated by some melody. Neil's the only one who does that. There's nobody in his category."


"Bob Dylan, I'll never be Bob Dylan. He's the master. If I'd like to be anyone, it's him. And he's a great writer, true to his music and done what he feels is the right thing to do for years and years and years. He's great. He's the one I look to. I'm always interested in what he's doing now, or did last, or did a long time ago that I didn't find out about. The guy has written some of the greatest poetry and put it to music in a way that it touched me, and other people have done that, but not so consistently or as intensely. Like me, he waits around and keeps going, and he knows that he doesn't have the muse all the time, but he knows that it'll come back and it'll visit him and he'll have his moment." 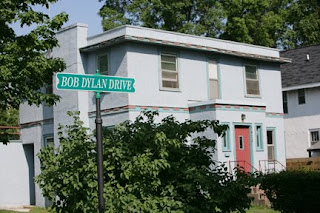 And so the story is Bob Dylan pops by the boyhood home of Neil Young. There are many who do the same thing and make the pilgrimage to visit Dylan's childhood home in Hibbing, MN. Not sure if Neil Young has been one of them, though.

On that note, we bring back for an encore one of the great live performances that included - among many - Bob Dylan and Neil Young together on stage.

A self-ordained professor's tongue
Too serious to fool
Spouted out that liberty
Is just equality in school
"Equality," I spoke the word
As if a wedding vow.
Ah, but I was so much older then,
I'm younger than that now.

In a soldier's stance, I aimed my hand
At the mongrel dogs who teach
Fearing not that I'd become my enemy
In the instant that I preach
My pathway led by confusion boats
Mutiny from stern to bow.
Ah, but I was so much older then,
I'm younger than that now.

From My Back Pages, by B. Dylan

WEDNESDAY PM: Okay, here's you go, Neil Young with the Boss on the signature song:

NOTE: Thanks for the Cafe link, RWB!
Posted by Unknown at 7:43 PM

Back in February 27, 1991, I went to the Capital Centre, Landover, MD (sniff, gone) to see Neil Young, no I didn't, I went to see Sonic Youth (opening and before that was Social Distortion), trust me the aging hippies in the audience HATED it and they were not too impressed with Niel learning some of Thurston Moore's rifts¹ either. I actually gained a little more respect for the guy, if some old geezer was going to keep up with punk, he might not be all that bad. He fan base could have used a little updating (ahem).

Caught Neil at Madison Square Garden, w/Crazy Horse and his loud "thrashy" incarnation, while I was at General Seminary.

Prior to that, he'd played an outdoor gig in SoCal... he came out with a good deal from a his then-current album (might have been Reactor ... my brain is losing cells), and then he stated taunting the audience about "Wanting him to go back in time" - whereupon years began scrolling up a big screen.

As it got back into the 70s & 60s, the fans were screaming for it to stop and have Neil go into his "classic" material... but the "scroll" continued back to the 50s...

So Neil comes out with an ensemble called "The Shocking Pinks" and busts a set of 50s style rock & roll. Then, he leaves in a big pink cadillac (this is shown on the big screen after he leaves the stage), and an announcer intones stolen Elvis - "Neil has left the building."

Some fans were laughing and in ecstasy about Neil's audacity... others were yelling, "You s**k, Neil."

So, anyway, There is a town in north Ontario...

Powder Finger, Cinnamon Girl, Old Man... He's the uber-dude.
I'd like to see him fill the late Roy Orbison's chair in the Traveling Lynnbur err, I mean Wilburys
:-)

I'm no great fan of Neil Young, but I do love his cover of "Just Like Tom Thumb's Blues," as linked here.

I have been amazed by these two artists for about 45 years. I cannot imagine life without them. How lucky we are to have their art. Saw Neil at the Cow Palace in San Francisco in the early 1980's. The dancing stopped only at intermission. A large group of old hippies never stopped grooving. I recognised them from Winterland and the Fillmore. It was so good.

We went to see Neil Young last night, in a solo concert. It was wonderful! He looks great, sounds great, and played all alone. Neil Young tickets were something positive. He played the organ, pump organ, piano, harmonica, electric guitar, and acoustic guitar.

I do agree that it appears Neil Young hasn't sold out or whatever but aren't his Neil Young tickets outrageously cheap. But if that's because he doesn't use sponsorship than I guess that's cool.