The Archbishop of Canterbury will attend the General Convention of The Episcopal Church; "Chicago Consultation" elevated to official status 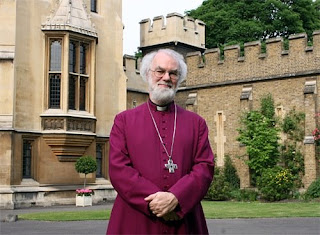 It is now confirmed that the Archbishop of Canterbury Rowan Williams will intervene attend the General Convention of The Episcopal Church, July 8-9 in Anaheim, California.

Apparently, he will participate in some sort of Bible study (exactly how and where is oddly left out - but one might speculate it will be with the House of Bishops, unless he just plans to just gather the remnant at a snack bar in Tomorrowland) and be a keynote speaker at some kind of "global economic forum" on July 8th - the details of which, including the event's name or sponsor, are also oddly left out.

Frankly, what I found perhaps of more interest than even this piece of news (which clearly 815 is downplaying - even dismissively spinning - for some reason) is this little item in the same story:

The many international guests invited to Anaheim include primates, bishops and provincial secretaries from many of the Anglican Communion's 38 provinces, especially those who have "not experienced our General Convention before and have very little understanding about how we operate as a church," said the Rev. Chuck Robertson, canon to Presiding Bishop Katharine Jefferts Schori.

Invitations are extended by the Episcopal Church's Partnerships Center, Jefferts Schori, the Church Pension Group, Trinity Church Wall Street in New York and the Chicago Consultation (a group that supports the full inclusion of gay, lesbian, bisexual and transgendered Christians in the Episcopal Church and the Anglican Communion.)

Note that "Chicago Consultation" (which is a self-appointed lobbying group formed as a strategic response from Integrity) has been elevated to a status on par with the official church organizations of The Episcopal Church, as well as the New York mega-bucks flagship church, Trinity Wall Street. The dioceses themselves (who should be the ones who are the primary official leadership since, well, it is their General Convention) aren't mentioned until later, even as an after-thought. After a while, it just becomes a farce. 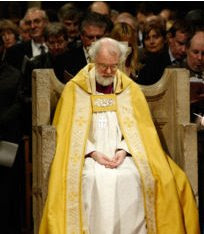 No wonder Rowan Williams is coming. He's taking the Anglican Communion crisis quite seriously. He will have the opportunity to personally establish a mantra that could be used by moderates and the orthodox to rally General Convention for the Anglican Covenant before it's too late. It's abundantly clear that both Katharine Jefferts Schori and Bonnie Anderson have no intention of picking up that banner before their own office-terms conveniently expire.

Schori and Anderson have the power of the gavel, no doubt a powerful tool indeed, and now we see that the Chicago Consultation will officially be flying in their forces as well. Apparently, this does not yet discourage the Archbishop of Canterbury from personally intervening attending General Convention in this most crucial hour for The Episcopal Church.

You know, with all this talk of "Bible Study", I'm sometimes almost persuaded that what is being referred to is some kind of Church. But then I return to my senses and recall who the parties involved are. So they must be speaking in some sort of code; "Bible Study" must be something else. Where is Dan Brown when you need him?

"The global scene is so fragile, the world is so fractured, that we desperately need to engage partners across geographical lines and faith differences in order to create a climate of hope for just resolutions of conflicts that face us."
Sounds like a reason to recognize ACNA and let the people go in peace to love and serve the Lord. Funny how they certainly didn't intend that.

It is most likely the daily Bible study that all Bishops, Deputies, Alternates and visitors participate in every day. All are assigned a table number and 8-15 people gather to discuss the Bible passage of the day. General Convention has been doing this for many years. Following Bible study we share the Eucharist. Music from various traditions of the church is also a part of this. If you come to GC you will be assigned a table group. Come and join us.

I wish I had your faith in Williams, Mary, also wish I knew more details. I simply do not trust TEC, and that it seems all so one sided.