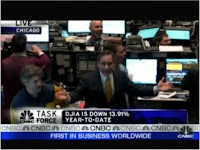 CNBC's Rick Santelli pops his cork on the floor of the Chicago Mercantile Exchange. He calls for a new "Tea Party" at Lake Michigan in July and says that today Benjamin Franklin and Thomas Jefferson are rolling over in their graves - but those on floor of the exchange are far from rolling, they are rocking in protest. "This is America!"

The thing is, who made the deals on those mortgages in the first place? They had to know that the risky mortgages would eventually fail (or be taken over by the short-term house-flippers?) - did they really think the sun would shine forever? How utopian is that? Or did they think the bad guys would blow America up before the balloons inflated? Or did we all just stop thinking? Party on, Wayne. Whatever the case, it's always apt to remember now the adage, caveat emptor. If it's too good to be true, then it's too good to be true. The only time that's not the case is Easter Sunday.

While the people who took the mortgages have a moral responsibility to pay the money back, the banks and mortgage companies that soliticited the loans to these people bear a greater responsibility.

I agree. Does that make us liberals? I don't think so. We're not saying the government needs to swoop in and save everyone - especially since it's Congress that has some explaining to do. But we need to address how and why these mortgage companies and the banks - the banks! - turned themselves into casinos.