The Legacy of Betty Yates 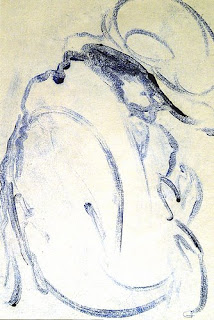 I saw him enter the church late.

The funeral had all ready started when I saw him, disheveled, graying hair in long thin wisps passed his shoulders, an oversized and unzipped green coat swaying precariously down his shoulder, and he came into the church and peeked around the corners of the doors seeking a place to sit.

The church was packed as though it was Easter, though Easter was still months away. The room was filled with pensive men in long dark blue coats and freshly laundered suits, mixed in with their wives and widows and other professional men and women who who had taken time from the office to gather, looking thoughtful, even somber, as more guests arrived, African American ministers with their Bibles came in and found seats along with not just a few younger men and women who looked somewhat bewildered, as though this may be their first funeral.

And interspersed throughout the congregation were more men and women, ageless, from all kinds of ethnic backgrounds, who sat amongst the pews with everyone else, though they were far more creatively dressed. They were the homeless and they had come as well. They sat throughout the congregation next to the blue suits and the men with their Bibles, all packed into pews and gazing at the casket that reminded us all that Betty Yates was gone.

Betty and her husband Munny were well known in the Christian community around Fairfax for being one of those couples who didn't just talk their faith, they lived it. The first time I met them was when I was an eighteen year old newcomer to Truro and the very first thing I did after arriving at Truro was to take their Life in the Spirit Seminar class that they taught at the church. I couldn't get over that Munny, who was a lawyer by trade and not a minister, was the one who was standing up and welcoming everyone to the class each week. That seemed extraordinary to me at the time, that this church seemed to raise up lay leadership not just in word, but in deed. And Munny and Betty responded by living out their faith. They were leaders and I never forgot them.

Their faith came to a test one day five years ago when they were driving by the LAMB Center in the City of Fairfax. The LAMB Center is a daytime drop-in center for the homeless in Fairfax. Fairfax is one of the most well-heeled locations in the United States and the idea that it also included a homeless population seemed unthinkable to some. But in a partnership with the City of Fairfax, and the County of Fairfax, and the local churches in the area, the LAMB Center had been established for over fifteen years as a vibrant and growing outreach to this most disenfranchised and almost invisible people.

One day, Munny and Betty drove by and said to each other that they needed to do something too.

So they started a house church in their home for the homeless. Soon, it grew grew, with more men and women - sometimes in the most desperate of circumstances - coming into their home weekly for a Sunday meal and a Christian worship service.

Finally, they outgrew the Yates' home, while the local neighbors was stretched to the limit to show their own hospitality, so Munny and Betty turned to Tory Baucum, the new rector of Truro to see if the church could help. Having just established Truro's vision for "radical hospitality," it's possible that Tory never dreamed that this vision would be tested so quickly and so dramatically. But he did not hesitate to respond and opened up the first floor large conference room of the International Christian Ministries (ICM) building across the street that is owned by Truro.

Soon more than a hundred homeless people were attending and again they outgrew their facilities. After a few citations from the city, it was clear something had to be done. So Truro opened up the Undercroft in the Main Church after the 11:15 Sunday Eucharist ended, for a 2:00 p.m. hot meal and a worship service.

The name of the community is "Love the World Fellowship." Soon it grew to over two hundred people. Seven Truro Home Churches made the commitment to join in supporting the community and it was clear that lives were being transformed, one person at a time. Much of this vision for transformation and love came from Munny and Betty Yates. They set the bar high to love unconditionally and to reach out beyond what might have been their comfortable years together to see not only stomachs fed each Sunday, but also the souls and spirits of so many who were often forgotten as being among those Jesus loves completely. Love the World Fellowship is a community for Christian worship, reaching out to one another with the Good News of Jesus Christ. "For God so loved the world," says John 3:16, "that He gave His only begotten Son. That whosoever believes in Him shall not perish, but have everlasting life." This applied to all, even those in the shadows.

The outpouring of this love came through the serving of the meal, in the fellowship, in the teaching, and in the worship. In it, Betty Yates showed her faith and love to all who came, in whatever state or circumstance they mind find themselves in. She practiced seeing them as Jesus sees them, as Jesus sees us, all of us in need of His healing touch and His transforming grace. She listened to their stories, she prayed with them through their stories, and she shared with them the greatest story of them all.

And in the midst of all this, Betty battled cancer and ten days ago her battle came to an end. And then she was gone.

I was in the choir last Thursday morning when hundreds gathered to say farewell. All her family were there, with Munny in the front row surrounded by his children and his grandchildren. In the pews all around him were so many people from all walks of his life, and Betty's life, but as the service went on it was the community of Love the World Fellowship that kept coming, and coming, and coming through the doors.

Those in the pews moved over and waved them in, so these new guests sat all throughout the congregation, black and white and every kind of nationality one could imagine, men and women who had all come to say goodbye to Betty.

But this one guest, disheveled but stoic, found a place to sit near the center of a pew. And I could see him over the tops of the many heads, sitting quietly. When it came time for the Eucharist and for people to come forward, in the Episcopal tradition, at least how we've practiced it at Truro, the mourners lined up in the center aisle and came up to the altar rail, passing the casket on the way. I watched as they came, hundreds of people from all walks of life who had been touched by her life and I watched pensively as they passed by the casket. Some could not bear to look and others paused a moment before coming forward to the rail.

I saw this particular guest find his way to the line in the center aisle, at first tentatively but then with deliberate steps as though he'd done this before. His coat, several sizes too big for him, nearly enveloped him and his hair was long and thin. But he continued his slow walk in the line toward the communion rail - and then I saw it.

As he came to the casket he stopped. He looked down at it and paused. And then he extended his hand and placed it gently on the side of the smooth wood panel and nodded his head as though paying his respects to a fallen soldier.

When he looked up again, I saw his eyes and they were glistening though clear. And I didn't see a homeless man anymore. I just saw a man, a man with a story, a man who's life had been touched by the love of God, a man that Betty saw and prayed with and led to Christ.

Who was rich that day and who was poor? I ask you.
Posted by Unknown at 8:14 PM

If this lady is only half as beautiful as your tribute, then she truly reflected the glory of the Son into this world; somehow I get the feeling that you were quite eloquent and crafted each word with care that they do not do her justice.

May the Lord continue to raise up and craft saints like this and may He comfort the many who are grieving their loss this day.