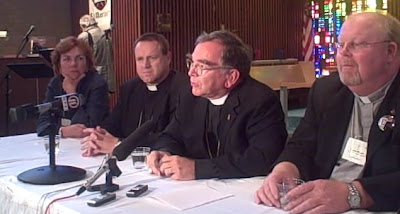 via e-mail and here:

TO THE CLERGY AND PEOPLE OF THE DIOCESE OF PITTSBURGH
Dear Brothers and Sisters in Christ,

As we enter the holy season of Lent, I have been thinking about the broken relationships we face.. The depth of that brokenness was encapsulated for me in the most recent communication of the new Episcopal Church Diocese concerning our realignment and the Calvary Church litigation. I am especially troubled that the approach taken by the leaders of the new diocese misrepresents what the litigation to date has been about and calls into question the consistently expressed and long-standing commitment on our part to find a charitable and non-injurious way through the dispute between us.

We struggle not just with flesh and blood, as St. Paul reminds us. Ours is surely a situation in which powers and principalities have been at work to confuse and to complicate. I pray daily that God will provide guidance for the best way forward - as only He can do. By God's help, we must seek to discover a more excellent way.

The facts relating to Diocesan withdrawal are well-known to all of you. Similarly, our position in the Calvary litigation has been consistent and straightforward from the very beginning. The 2005 Stipulation and Order does not address Diocesan realignment.

After the Realignment Resolution passed at the 2007 Diocesan Convention, Calvary took the position that if Realignment occurred after a second reading of the resolution at the 2008 Convention, then the Stipulation would act to bar the Diocese from continuing to use and administer Diocesan property. We opposed this argument, advising the court of our position that the Stipulation did not address realignment. We advised the court that the process for Diocesan realignment was in place and that we intended after realignment to continue to hold and administer Diocesan property for the beneficial use of all the parishes.

This process was transparent. We have tried to follow the good example of St. Paul in the 26th chapter of Acts by speaking and acting openly, and "not in a corner."

The leaders of the new diocese challenge the validity of the Diocesan realignment. Although we strongly disagree with this position, we recognize that some of these leaders publicly took this position at our 2007 and 2008 Conventions. In this respect, it is right to acknowledge that their position on this issue is consistent, and to recognize that they believe it their duty to challenge the legitimacy of the Diocesan action.

The same cannot be said, however, for the new diocese leaders' recent adoption of Calvary's arguments regarding the 2005 Stipulation and Order. On behalf of the new diocese's Standing Committee and Board of Trustees, Dr. Simons and Mr. Ayres (the presidents of each body) have written: "We call attention to the stipulation signed in good faith by Bishop Duncan's attorneys on October 15, 2005, which clearly defines how assets are to be disposed of, if any attempt to leave the Episcopal Church occurred - they are to stay in the Episcopal Diocese of Pittsburgh of the Episcopal Church."

The statements made, and the inferences apparent for readers to draw, are both incorrect and unfair. The reference to "good faith" and "Bishop Duncan's attorneys" appears to be an attempt to personalize the present dispute as being about my actions alone, and they question my good faith. Our counsel represented me as Bishop of the Diocese, but also represented all of the other defendants in the litigation, including the then-members of the Standing Committee, and the Diocese itself as an entity. Personal attacks on me during the litigation are not new, but I reject the improper personalization of my role as Bishop. On issues of property and fiscal stewardship, the Bishop operates within a well-defined role outlined by the Diocesan Constitution, Canons, and Financial Regulations. This structure delineates the proper role of not only the Bishop, but also the role of the Standing Committee, the Board of Trustees, the Diocesan Council, and the Diocesan Convention. I have
faithfully exercised my duties on all of these issues.

Beyond needlessly personalizing the dispute - an action that I admit wounds me, particularly because I have counted so many of the leaders of the new diocese as friends and gospel allies - the proffered discussion of the Stipulation is simply incorrect. The letter of February 18 states that the stipulation "clearly defines" what happens "if any attempt to leave the Episcopal church occurred." Instead of quoting the Stipulation to demonstrate its clarity, however, an interpretation of the document's language is substituted. In fact, paragraph 1 of the Stipulation reads as follows:

Second, the context of paragraph 1 is that the Diocese agreed that if parishes left the Episcopal Church, Diocesan Property would "continue to be … held and administered" for the "beneficial use of parishes and institutions of the Diocese." The paragraph does not require the Diocese to "transfer" property, or to "abandon" property (as would be the case if the Diocese were to "leave property behind"), but instead states how Diocesan property "shall continue to be … held or administered." Applied to our current situation, it is plain that we are not violating the Stipulation. The Diocese "continues" to hold and administer Diocesan Property, and does so "for the beneficial use of the parishes and institutions of the Diocese."

The real point clear from the letter is that the new diocese's true argument is not that the Stipulation has been violated, but that the Diocese's withdrawal from TEC is invalid. There is only one way that Diocesan assets could "stay in the Episcopal Diocese of Pittsburgh of the Episcopal Church", and that is if the "Episcopal Diocese of Pittsburgh of the Episcopal Church" was a continuing entity, i.e., the Diocese's realignment was invalid. If, on the other hand, the Diocese's realignment was valid - which it was - then the Diocese "continues" to exist as it always has, but is now aligned with the Province of the Southern Cone (and very soon with the Anglican Church in North America.) A new diocese may form in Pittsburgh and align with TEC, but this is not a "continuing" Diocese. And for such a diocese to gain control over any Diocesan property, the property would have to be transferred from our Diocese to the new diocese.

On this point, too, we have been consistent and clear with Calvary and with the court. Our withdrawal is valid and proper, and the Stipulation imposes no requirement on the Diocese to transfer any property to those parishes that leave the Diocese and work together to form a new diocese, aligned with TEC. Despite this legal position, we have repeatedly stated to the court that we would prefer, and that we would agree to, an equitable distribution of Diocesan property, as the leaders of the new diocese are well aware. Moreover, a "first draft" proposal for such a distribution prepared by pre-realignment Trustees Douglas Wicker and Douglas Toth was in circulation even before the vote to realign. The statement of the leadership of the new Episcopal Church diocese that "no proposal has been tendered until February 5, 2009" is misleading in the extreme. Regretfully, the timing of proposals is irrelevant because the Simons/Ayres letter makes clear that the leaders of the new diocese
do not want an equitable division; they want all of the Diocesan property. The letter of February 18th unequivocally rejects the offer made by our Standing Committee and embraced by our Board of Trustees to mediate equitably.

The leaders of the new diocese, and many within TEC, will insist on a legal fight over the validity of our withdrawal from TEC. We will engage in this battle, as we must. But there should be no mistake on the following points: the Stipulation and Order does not address the Diocese leaving TEC, and the leaders of the new diocese want nothing less than all Diocesan assets.

In closing, I request your prayer and support so that we may find a better way to address these issues and peaceably end the dispute that divides us. Our commitment - and I know that I can speak here for the Standing Committee, Board of Trustees, Diocesan Council and all leaders and people of the re-aligned Diocese of Pittsburgh - is to journey faithfully through this Lent until God's Easter breaks upon us. And alongside this, our commitment is to stay focused on the mission of fishing for men and women, boys and girls, in the deep waters to which Jesus has directed us (Luke 5:1-11).