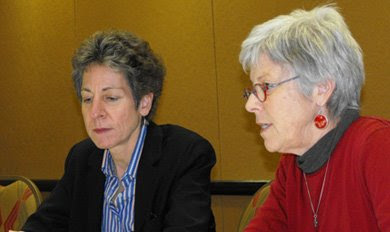 As we know, Presiding Bishop Katharine Jefferts Schori's term ends in six years. They'll be no Anglican Covenant on her watch, it appears.

At the close of its three-day winter meeting on Jan 31 in Stockton, California, the Executive Council endorsed a report from a task force that recommended the delay on adopting the Covenant, and voiced strong criticism of the most recent draft of the document.

The Anglican Covenant will be presented to the Communion at the May meeting of the Anglican Consultative Council in Kingston, Jamaica. Presiding Bishop Katharine Jefferts Schori last year urged the church not to take up the Covenant at the July meeting of General Convention saying more time was needed.

However conservative critics said the delay was politically motivated, noting that when the issue of affirming the election of a partnered gay priest was brought before Convention in 2003, a similar timeframe was not found to be objectionable by the church’s liberal hierarchy.

Waiting until the 2015 General Convention “would provide a fruitful opportunity for [the Episcopal Church] to hear the voices of other members of the Anglican Communion as they discuss future drafts.”

The report also said dioceses would not be permitted to endorse the Covenant by themselves, as it could only “be embraced on the provincial level, that is, The Episcopal Church, and not on a diocesan level.”

Sanctions for bad behaviour contained in the Covenant’s appendices were held objectionable, and violated The Episcopal Church’s autonomy. “Care needs to be taken that our conversations around an Anglican Covenant do not draw us necessarily toward a hierarchical model of a church union or even the perception of Anglicanism as a singular global church,” the report said.

“Matters of moral authority and interdependence amongst the churches result from mutuality, not from regulation,” said the report, which was adopted unchanged by the council, save for the movement of a comma, Bishop Jefferts Schori said.

A few months ago, I looked back at the time table between Gene Robinson's election and the GC 03 approval. It was seven weeks. Seven weeks to debate the tearing (no, the shredding) of the fabric of the Communion! Hypocrisy, thy name is revisionist Episcopalian.

Herr Rolfe: Did you ever swear
to the Civil Servant Loyalty Oath of?


Dr. Wieck: Everyone did.

So, much for the polity of TEC.

Madame Jefferts-Schori does not have the authority to deny the other dioceses from signing on to the covenant. She is breaking canon law again as she has no authority in any individual diocese.

Hypothetically speaking: What happens if a diocese of the TEC says I wish to remain in full communion with he Anglican Communion, as evidenced by an Anglican Covenant that has been ratified, or not by a TEC General Convention? I'm just throwing this out there for discussion, mind you.

The Communion Partner Bishops will indeed pass the Covenant on the local level. If the Anglican Church in North America is established, Katharine Jefferts Schori will be faced with a decision. She can continue to carry on the prophetic witness imposed on her by Bonnie Anderson and her allies (and we will find out who is really the political power center) or she will be faced with the Communion Partners denying her imposed authority (it's not canonical, she cannot control the dioceses - that's one reason we're Anglican, not Roman Catholic and why the Episcopal Church has a Presiding Bishop NOT an Archbishop. She does not have that authority).

We can only speculate why Bishop Lee gave up the autonomy of the Diocese of Virginia. But she had no canonical authority to do what she did. Her predecessor knew that, the Protocol was completed during his tenure. It all changed when she took over and why, well, that is open to fascinating speculation.

Now, Rowan Williams himself has said that the Covenant is a matter for the provinces - it's designed for provinces to pass. But what if a province refuses either by sins of commission or omission (i.e., putting it off until Schori is out of office)? What happens then? Will the Communion Partners be parked in this "escrow" province that is being created as well? Again, that's open to speculation.

For that is what the ACNA Province may be - that place of "escrow" envisioned at Lambeth and continued at Alexandria. Rowan Williams and the Primates acknowledged that all of us in ACNA are Anglicans - a major step forward that runs totally counter what Schori and her allies say. We have not left the denomination. We are Anglicans - Episcopalians in exile and American Anglicans.

Will TEC suddenly become partners with the embryo province and go along with this scenario? It's hard to imagine, unless there is some catastrophic event we don't know of. Something must intervene.

But would TEC do it willingly? No. And surprisingly - for not only political reasons, but also for theological reasons. It would be a disaster for them because it would mean that TEC did not receive a Prophetic moving of the Spirit after all - Schori alluded this in her testimony during the first Virginia trial. Even the progressives believe that a prophetic move of the Spirit would not bring separation and schism (and for those are believers, they know what the consequences will be for leading those who were in their charge astray and it's not very pretty, but for the mercy of God - Schori appeared understand this). That is why Bishop Schori and her allies maintain, that the "dissidents" have left the denomination - they cannot, they will not agree that the church is in schism. That's why priests and bishops are deposed - it's imperative from a theological point of view that there is no schism!

It would be a disaster for them to admit that there is division in the denomination - but of course, it's all ready true.

But the extension of the hand of fellowship has been offered yet again to TEC (remember what Jesus said about forgiving - how many times? I don't have a problem with the extension of repentance being offered multiple times, it really hasn't been that long in the full scope of things, though in this age of communication it certainly feels that way!). But for a Damascus Road Experience, it seems highly unlikely - with Schori going around herself fueling those in the dioceses that went to the Southern Cone and are upset and declaring them victims in need of her rescue. No, it doesn't look very good.

That's not to say it couldn't happen. Remember who signs peace accords - Arafat, Sadat, Kadafi, and even Gerry Adams - people you would never have dreamed would sign peace accords and those are quite dramatic examples. So, it is a possibly that one of the most least likely leaders could turn around. But right now there doesn't seem to be much evidence. We keep praying though!

So what if TEC doesn't sign the Covenant or even put it up for a vote at this General Convention (and we are reminded that it was a matter of a handful of months that Gene Robinson was elected and the affirmed Bishop of New Hampshire - no time for discernment there, no time to bring it back to the laity in the dioceses to discuss - nothing, no regard to all the instruments of Communion and the House of Bishops' own theological committee that all recommended NOT to do it - it went forward without so much as a blink!)? The idea that Schori and Bonnie Anderson cannot bring the Covenant up for a vote at this General Convention or call a Special Convention to do just that is outrageous. It just doesn't wash. And that they maintain that oh, they couldn't even get to it until when? When Schori is out of office! It's just silly.

It could be that some of these Communion Partners will just throw their hands up in the air and retire. Many have all ready, even those who proclaimed they were Windsor Bishops (remember, Bishop Lee?). This is why it is a cause for the laity - and I just don't see the remnant laity getting all worked up over it, but for some interesting diocese.

TEC will bleed members out, laity most especially. Where will they go? Will they go into "escrow" and join the new birthing province? Or will they also just fade away? I can think of some that may not go quietly.

I look at someone like Mark Lawrence, who - if he's not careful - will have a full uprising on his hands if he doesn't act. He knows that. He saw it up front and personal at Lambeth. The resistance will come from the ground up. If General Convention stalls and ignores the Covenant at General Convention, watch Bishop Lawrence call his diocese into convention to sign the Covenant.

If Rowan Williams follows up on what he's said all along, and if he stays healthy he's going to be around for a long long time - and it could get mighty interesting. We did not take any steps back at the Primates Council and that says a lot.