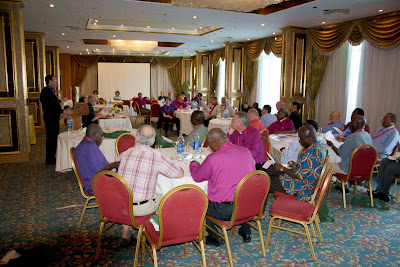 On February 3, the third day of the meeting, the primates will receive a report from the Windsor Continuation Group (WCG), discuss theological education in the Anglican Communion and address the issue of global warming. The Archbishop of Canterbury has asked that the WCG report be kept private until the primates have concluded their meeting.

A drafting group has been appointed consisting of five primates -- archbishops Bernard Ntahoturi of Burundi (chair), Paul Kwong of Hong Kong, Alan Harper of Ireland, Ian Ernest of the Indian Ocean, and Carlos Touche-Porter of Mexico. The Rev. Canon Gregory Cameron, deputy secretary general of the Anglican Communion, is serving as secretary of the drafting group, which will prepare a communiqué for release towards the end of the meeting.

Archbishop Daniel Deng Bul of Sudan is expected to arrive in Egypt on February 3 after resolving visa complications.

Isn't it nice that in the age of tele-conferencing and video-conferencing that the various Provinces of the Communion have seemingly endless supplies of money to afford such meetings?