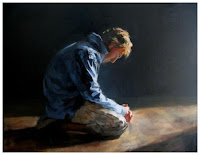 BB NOTE: Note, among other things, that Rowan Williams says that the Primates call for continued adherence by Anglican provinces (including the United States and Canada) to the moratoria.

Note also his focus on the idea that purity is sought by both progressives and traditionalists, to the detriment of communion. Underlying the assumption, however, is that truth remains a shadow and revelation that may not always be challenged. It's sort of a laissez faire approach to church polity.

As a Wesleyan, I admire the freedom that requires. It can be quite creative when the Holy Spirit pours out over a generation. But what happens when the moral restraints are lifted and the meaning of the words are altered? What happens when laiseez faire becomes license for self-indulgence (as we've seen of late in the American and British financial markets) with no inner restraint for the welfare of the community? The same sort of loss of moral restraint we've seen in the financial markets has also been let loose on the Anglican market as well. Rowan is quick to point out the moral collapse when it comes to the recent financial crisis, but what of the moral and theological collapse as well? Could they not go hand in hand?

Where, then, is the place for conviction and the courage of living those convictions? His illustration of Zimbabwe suddenly becomes rather ironic. Could it not be so much about purity (which is a strawman if Zimbabwe is to be taken seriously, is their struggle about purity as well or about truth?) then it is truth - and real truth does not enslave us in idolatry, but sets us free to worship God and love our neighbor. There is plenty of mystery in that truth, which is where the Anglican tradition shines. It is the juxtaposition of truth and mystery that enfolds the drama of Eucharistic worship and preaching and teach of scripture.

But at some point, there must be truth - and purity, walking hand in hand with humility, is understood to be the result of walking through the fire of truth. "Blessed are the pure in heart," Jesus says in Matthew 5, "for they shall see God." What is at the greatest risk is not our purity (for we are sinners in desperate need of a savior), but our hearts. That is the great risk, the hardening of our hearts.

What divides us is not our lust for purity, but our adoration of idols. Idolatry leads to the hardening of our hearts.

And what hardens our hearts? Our selfish ambitions and desires, to get what we want because we want it. What divides us is ourselves. Until our hearts are broken, there will be no unity.

A broken and contrite heart,
O God, you will not despise.
Psalm 51:17
Here is an excerpt from the Archbishop of Canterbury's address to the Synod of the Church of England today. From here: 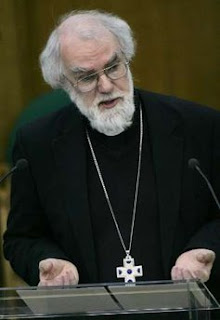 Sebastian is one bishop among five in Zimbabwe and one many among hundreds of thousands of Anglicans there trying to live out the Christian witness by feeding, clothing, healing and all too often mourning and burying people in their communities. You will have seen last week's statement from the Primates' Meeting about this, unanimously committing the whole Communion to continue and extend its practical support for the Church in Zimbabwe. In the light of this, the Archbishop of York and myself will be launching on Ash Wednesday an Archbishops' Appeal for Zimbabwe, in the context of a Day of Prayer for Zimbabwe. We hope that this will be part of a communion-wide project for Lent, and that every diocese represented here will play its part, responding to the urgent calls for help with medical supplies, food and clean water which come daily from Zimbabwe. Please publicise this Appeal in your dioceses and continue your prayers.

This is only one example of what people do not want to lose in the life of the Communion. And it is a good Pauline principle, if you read II Corinthians, that we should be glad of the honour of being able to support other churches in their need. Who knows whether some other structure than the Communion as we know it might make this possible? But the bare fact is that what now, specifically, makes it possible is the Communion we have, and that is not something to let go of lightly. Hence the difficult but unavoidable search for the forms of agreed self-restraint that will allow us to keep conversation alive – the moratoria advised by Lambeth, very imperfectly observed yet still urged by the Primates as a token of our willingness not to behave as if debates had been settled that are still in their early stages at best.

The Communion we have: it is indeed a very imperfect thing at the moment. It is still true that not every Primate feels able to communicate at the Lord's Table alongside every other, and this is indeed a tragedy. Yet last week, all the Primates who had attended GAFCON were present, every one of them took part in daily prayer and Bible study alongside the Primates of North America and every one of them spoke in discussion. In a way that I have come to recognise as very typical of these meetings, when talk of replacing Communion with federation of some kind was heard, nearly everyone reacted by saying that this was not something they could think about choosing. We may have imperfect communion, but we unmistakably want to find a way of holding on to what we have and 'intensifying' it – to use the language I used last summer about the proposed Anglican Covenant. Somehow, the biblical call to be involved with one another at a level deeper than that of mere affinity and good will is still heard loud and clear. No-one wants to rest content with the breach in sacramental fellowship, and everyone acknowledges that this breach means we are less than we are called to be. But the fact that we recognise this and that we still gather around the Word is no small thing; without this, we should not even be able to hope for the full restoration of fellowship at the Eucharist. 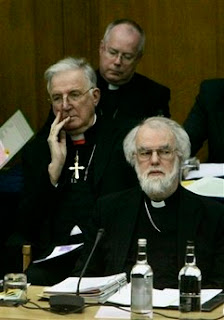 Underlying this is something that dawned on me last week with a renewed force. We have not yet got to the point where we can no longer recognise one another as seeking to obey the same Lord. To make a very simple point, common Bible study would not be possible if we did not see in one another at least some of the same habits of attention and devotion to Scripture, whatever the diversity of interpretation. We can see that the other person is trying to listen to God's self-communication in scripture, not just imposing an agenda. But this entails a more complex and challenging point. If we recognise this much, we have to recognise that the other person or community or tradition is not simply going to go away. They are near enough to be capable of conversation, shared prayer and shared discernment with us. They are not just going to be defeated and silenced. For the foreseeable future, they are going to be there, recognisably doing something like what we are doing. We can't pretend.

But we'd like to. All of us – and I do emphatically mean liberals as well as traditionalists – have a bit of us that is in love with purity, that wants to find in the other a perfect echo of ourselves and to be able to present to the world outside a united face, whether of clear commitments to the liberties and dignities of humanity as seen in the modern world or of unswerving fidelity to the faith delivered to the saints – or both, of course. But what are we to do in a world where people don't go away? where the Church of God overall is never going to be pure as we would want to define purity and we are always going to be embarrassed by the fact that we bear the same name as people whose views we don't own or approve to the extent that they follow the same patterns and habits of prayer and listening? 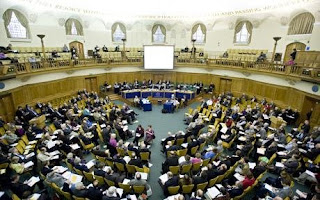 Anglicanism has always tacitly acknowledged this as a real issue – not because of an indifference to basic doctrinal integrity, a lazy belief that any formulation will do (the Creeds remain our touchstone, accepted as providing the authoritative framework in which we read Scripture), but because of a keen pragmatic awareness of the oddity and resilience of flesh and blood, the diversity of personal perception or reception of the common heritage, perhaps rooted in the commitment of our Church of England to be genuinely a church for this particular place and language and culture. Many feel that just this is what is now threatened from both ends of our current debates ...

Read the whole thing here. He goes on to address the leadership of women and particular in the episcopate, currently a hot-button in the Church of England. During the Synod, Roman Catholic Archbishop of Westminster Cardinal Cormac Murphy-O'Connor was also in attendance (see photo above) - a visual reminder of the larger Christian community.
Posted by Unknown at 1:06 PM

I wonder why they took the labels off of the Gin bottles in front of RW? The subtitle for the photo could be "Don't Drink and Lead!"

"As a Wesleyan..." Do you mean Wesley's search for personal and social "holiness" and Christian perfection? As an Anglican Clergyman, of course?

Don't you know holy water when you see it?

I'm no Calvinist, but I do play one on the internet :-)

We have not yet got to the point where we can no longer recognise one another as seeking to obey the same Lord.

except we have. we have got to that point long, long ago. Christians workshop Christ; ECUSA basically worships Dagon and sacrifices children.

And that is the root of the problem, and it will not and can never go away. The God of Shori is not Christ, never was, and never will be.