Anaheim will be no place for Disney 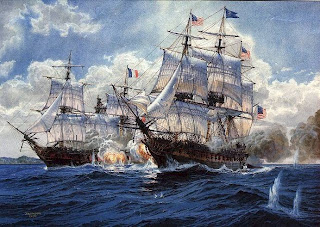 Matt Kennedy has posted some thoughts on the Primates Meeting called Alexandria: A Really Bad Meeting. There he comments on David Tremble's assessment of the Primates' Communique that "anytime one has to dig and parse that much to find positive nuggets in something like the Alexandria Communique, well, it's not a positive. No, I didn't expect ACNA to emerge a whole entity, nor did I expect any progress on any significant Anglican issues. But to come out of that meeting and pronounce that Communique to be a "successful outcome"? No Sale."

Matt agrees and says that:

... those imagining some grand scheme or unspoken promise under the surface in Alexandria are indulging in wishful thinking. The meeting was really really bad. The primates collectively--the orthodox primates included--stepped back from the kind of discipline envisioned in Tanzania. KJS, having defied and advocated for the defiance of the two Communion moratoria concerning same sex relationships, came and went at her convenience (late even) undisciplined and uncensured. And please, please, don't try to tell me that 2009 is "decision time" for the Episcopal Church. If we've learned anything since 2003, we've learned that it is Never decision time in the Anglican Communion.

Okay. Welcome to life on Capitol Hill. I may sound Dylanesque, but it often depends on one's point of view and then actions follow accordingly. Diplomacy is often smoke and mirrors (perhaps because people are still formatting what they think, especially if there's been deep engagements with one another beyond the niceties and trust is actually being formed, which - as we see in Northern Ireland, can take a very very long time) and frankly frustrating to those of us who want a plan now and ask questions later. We are can-do Americans, don't mess around with meetings, just get on your Conestoga and Go West, Young Man!

Well, I had some thoughts which I posted over at SF. Here 's my post: 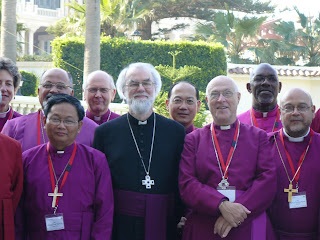 I continue to speculate that we are entering into a new phase in this crisis, not as easily "bloggable." I wrote some first thoughts about this after the Lambeth Conference here.

KJS is in a bit of a pickle. Arriving late and leaving early at a meeting of this importance (and not because you can't get through the border at first, as was the case with the Archbishop of the Sudan) sends a clear message to the gathered primates. KJS now returns to a province that is clearly not happy - that the time has arrived to walk boldly and proudly into the triumphant prophetic mission and the Anglican Communion is, well, a nuisance. Some interesting commentary has come from more progressive quarters that illustrate this attitude, even from those that have attempted to engage a more moderate voice.

KJS has made it clear that the Covenant will not be dealt with on her watch. At the same time, activity from the progressive wing of TEC (still an activist minority by the way) has intensified. They are mobilizing to take over General Convention and KJS is so busy handling the litigation, one wonders how much time she has to rally her own constituencies - unless it doesn't really matter. If she does not resist the progressive actions in Anaheim, then General Convention will strike down the restraints (meek as they were) put in place to satisfy the Communion. KJS will not be attending any more Lambeth Conferences (if there are any more). Why not just go do it? Just do it? It's almost as though the primates in Alexandria were egging her on.

I submit that this is presented as an American problem, not an Anglican one. The resistance from the rest of the Communion will not be one based on theology, but based on nationality. The idea is that we Americans just don't get it. Our blood is common, not royal. We are trouble makers. We don't listen to anyone. We only care about ourselves, our own borders and paying off anyone who stands in our way. We are this guy. We don't understand the finer points of diplomacy and we don't sing God Save the Queen. We are not in the Commonwealth. We virtually have very little in common with Anglicans around the world. And frankly, we don't care. We show up for your meetings late and we leave early. We wear blue jeans and we slump in our seats and we wish we were flying in the skies over Reno, anywhere, than to be sitting in this room with men we can't stand.

No, this is not easy to blog. It's not a daily "breaking news" kind of thing. Again, in British diplomacy (and even when one is at home with one's English cousins) it is not what one says that makes a difference, but what one does not say. It took an American to spoil the party at the last Primates Press Conference by pointing out the unmentionable.

In regards to the Communique, we cannot read it as Americans. When something is mentioned, especially when it's clear, it's intentional - it's not ironic, it's not fluff and verbiage. It is no small thing that the Anglican Church of North America is named and shown respect as an entity and while it admits our hurdles are significant (and they are), it clearly acknowledges that 100,000 people strongly desire to be Anglican and are working hard to stay in.

It is Katharine Jefferts Schori herself that will have to implement the Episcopal Visitors plan, she will have to go around and sell it the dioceses and congregations and organize it and make it work. The burden of proof is on her. If she doesn't deliver a working organization that is actually creating deliverables that can be marked and tracked and processed and then goes to General Convention and delivers no Covenant and no adherence to Lambeth 1.10, while at the Convention of the Anglican Church of North America there is enthusiastic endorsement of Lambeth 1.10 and a public declaration to commit to the integrity of the relationships we share in the Anglican Communion - then what? I don't think Bishop Schori will be having tea at Rowan and Jane's house any time soon.

Again, this is not easily bloggable stuff. Diplomacy is an art, it takes time - and we Americans are not known for our patience, now are we? Will Bishop Schori just allow General Convention to explode with actions by the prophetic activists that make up a significant number of General Convention deputies (and put her in office in the first place)? Will there be orthodox bishops out on the moors crying "Howl, howl, howl?" Will it be a complete disaster because no one will be able to restrain the strong arm of progressive prophetic action? Will we be there on the sidelines watching the whole thing go down?

And while General Convention explodes, who will be left smiling abroad?

PM UPDATE: The Rt. Rev'd Jack Iker, Bishop of the Diocese of Ft. Worth, has posted his reflections of the Primates Meeting here.
Posted by Unknown at 11:09 AM