Mr Blake, an archbishop of the Open Episcopal Church, placed his children on top of his home and took pictures of them reading for a school project.

But worried neighbours called the police and Mr Blake, 52, was handcuffed before being taken away for questioning.

The pictures of his sons Nathan, eight, and Dominic, seven, were taken for a school book week competition themed on people reading in unusual places.

Mr Blake, a father of five, insisted the boys were used to rock climbing and adventure sports and were not worried by scaling the house in Welling, south east London.

He said the boys had climbed onto roof by clambering up onto a flat-roofed extension after he had attached them in a secure harness.

And he said the boys were already back in the house "full of excitement at what they had done", when police burst through the front door, marched upstairs and slapped him in handcuffs.

He said: "It was utterly ridiculous. We were doing it for a school project.

"The boys were asked by their teacher to be pictured for their book week competition reading in an unusual place.

"When they got home we discussed it and came up with this idea.

"I was very proud of their creativity and had no reservations about allowing them up there because they have both experienced rock climbing and are active participants in adventure sports.

"Not only that but the chimney stack is adjacent to a flat roof and I supervised them.

"They were quite safe."

There's been a lot of coverage of this incident and the police have not filed any charges. What caught my attention is that the father is "an archbishop in the Open Episcopal Church" in England? What is the "Open Episcopal Church?" Well, it turns out that it's stated mission is very close to the mission of The Episcopal Church in the United States, though it appears to be born out of the Netherlands as Catholic alternative to the Roman Catholic and what they refer to as fundie churches. Apparently. Reading the websites the rhetoric sounded strangely familiar, though the emphasis on traditional trappings is a bit deceptive. Here's it's explanation of marriage: 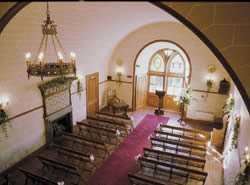 On a deeper level, marriage is a human relationship in which two people commit themselves to each other through promises of love and faithfulness. Vows are made and a covenant is established.

Deeper still is the Christian understanding of marriage as the creation of a new unity. The vows are made with God as a witness and God's blessing is asked on the marriage. Those who make the vows become co-creators with God for they create a new oneness out of two individuals. Marriage may thus be considered a visible sign of a new spiritual relationship. An outward sign of an inward grace; a sacrament.

The Church emphasises the opportunity that two people have to grow, through mutual trust and love, into responsible and loving persons. This is God's purpose for anyone who enters into marriage, basing this belief in the life, teaching, death and resurrection of Jesus Christ. Christian marriage is therefore an act of worship in which two persons publicly accept God's purpose for their lives and acknowledge the spiritual element of marriage.

That being said, we thought we'd offer this as a remedy for all the head-shaking going on:

Could you recast that "explanation of marriage" as a resolution for GC 2009? Or did somebody already think of that. I keep thinking that I read something like this explanation somewhere before. Maybe it was on the HOB/D list/serv...

bb,
Given what you tell us about the "Open Episcopal Church" what makes him an "Anglican clergyman" per the headline? Sounds more like an episcopus vagans loosely associated with former Roman Catholics in Europe.
In any case, if you could forward the "archbishop's" email address to 815, I am sure he will be in full communion with TEC in a matter of days. It will give KJS someone in England to replace Bishop Scriven with when she holds the special convention in Oxford....

You know, tjmcmahon, that's a very good point. If I change it to Episcopal that will make it even more confusing, so I've changed the headline to English bishop, for that's apparently what he is.