Episcopal Bishop of Pennsylvania Deposed for engaging in "conduct unbecoming a member of the clergy ..." 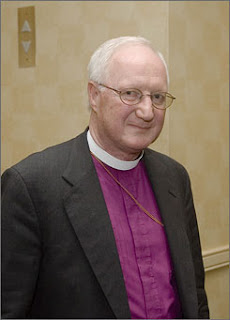 An ecclesiastical trial court has issued its final judgment and sentence that Episcopal Diocese of Pennsylvania Bishop Charles Bennison should be deposed from the ordained ministry of the Episcopal Church for having engaged in conduct unbecoming a member of the clergy.

The Court for the Trial of a Bishop upheld a decision it had made on September 30, 2008 that deposition was appropriate "in recognition of the nature of the offense and because [Bennison] has failed to demonstrate that he comprehends and takes responsibility for the harm that he has caused." Bennison has been inhibited or barred from exercising his ordained ministry since October 30, 2007 when he was first ordered to stand trial on a presentment, the church's equivalent of an indictment.

The trial court spent four days in June hearing the case against Bennison and determined later that month that he had engaged in conduct unbecoming a member of the clergy.

Read it all here. More on Charles Bennison here.

Kevin said...
This comment has been removed by the author.
7:09 AM

There are many on the reasserter side who had many things to say against this trial. I'm one who glad to see the results due to the trial testimony.

The other cases were that this was merely to go after +Duncan and the like. I empathize with the helplessness that the woman must have felt. I'm glad a measure of justice was done for her sake and wish the brother would also be held to account.

Kevin,
The only complaints about this trial I've heard from the reasserter side are that it came 25 years too late, and that the other bishops who knew about his conduct and did not act upon that knowledge are also culpable.

Beyond this, of course, Kevin, we have pointed out that it takes the PB 10 minutes to write and sign a letter stating that someone renounced their orders, when the person clearly did not- when she sees something they do as a threat to her position. It takes years of review, an extended trial, and several months of appeals process to get to the point where an ecclesiastic court can determine that they should recommend removing a bishop for covering up statutory rape.

A question/clarification, the headline says he is deposed, the story said the court reaffirmed its earlier decision that he should be deposed. An actual decision to depose him must be voted on at the HoB meeting in March, is this not correct?

Prayers for all, but especially for the woman who has had to endure a trial much longer than Mr. Bennison's.

Actually tjmcmahon, the points you make today were not the ones I read as it unfolded. I'm sorry, but I can't stand reasserter spin as much as I can't revisionist spin.

I think I may have higher view of Providence than many (who some thought the sexual misconduct cover-up should not have been the issue but his complete mismanagement as bishop), but still we do agree in prayer for the woman involved.

I just recheck the SFIF & T19 archives of this story, tjmcmahon, and I'm sorry but I did not find any comments that support your position, but I did find the ones were this was treated lightly when it broke (thankfully the more recent ones actually had few & somber comments)