The Economist focuses on Harry Potter 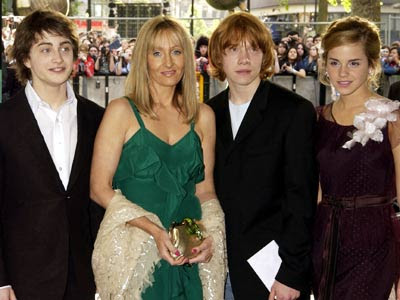 A fascinating article from The Economist focuses on the Harry Potter phenomenon. Here's an excerpt:

Harry Potter is a wholly different product. Instead of A-listers the films feature hitherto obscure child actors and British theatrical talent. Perhaps the biggest star is Alan Rickman, previously known to American cinema-goers (if at all) as the villain in “Die Hard”. Over time they have faded neither commercially nor artistically. If anything the reverse is true. After the first two films the Harry Potter franchise was handed to non-American directors more associated with independent film and television. Alfonso Cuarón, Mike Newell and David Yates have been given a good deal of autonomy by Warner Bros.

Harry Potter was in the vanguard of a new approach to big-budget film-making. Most modern blockbuster franchises have two things in common: they are based on known properties such as books and comics, and they are steered by respected but little-known directors. The successful “Spider-Man” films are directed by Sam Raimi, a cult horror-film maker. Peter Jackson, a New Zealander, was asked to steer “Lord of the Rings”, the first instalment of which appeared a month after Harry Potter. Perhaps the best example of the new model is the revived “Batman” franchise, now in the care of an independent-film director, Christopher Nolan. It is again producing critical cheers and plenty of money for Warner Bros. None of these franchises revolves around a star actor, although all have created stars.

In Harry Potter’s case, creative experimentation is possible because of the rigorous control exerted over many aspects of the production. The team that has worked on the Harry Potter films is unusually stable. Mr Heyman and the lead designers have stayed put throughout. All but one of the screenplays have been written by Steve Kloves. Stimulated by a steady supply of complex work, local outfits like Double Negative and the Moving Picture Company have grown in competence and can now handle just about all the films’ special-effects needs. Even more unusually, some sets have been allowed to remain in Leavesden Studios for almost ten years. As Mr Heyman puts it, directors may shoot the action from different angles but they are filming the same Hogwarts. It is as though the auteur tradition has been fused with the industrial approach to film-making that was common practice in Hollywood before the war.


Harry Potter a great name to every one. I like most to read Harry Potter and movie also enjoyable. Thanks J.K Rowling.