Is it all a facade? 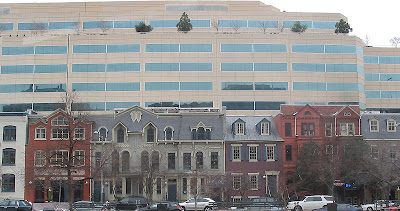 Back in the 1980s, after the Republicans lost the Senate, I went to work for the in-residence Architectural Historian at a law firm on K Street. This was at the height of what was then a rather new effort to invest in historical preservation while continuing to build modern structures for commerce in the city.

One of the great efforts underway at that time was to save historical facades, while gutting or tearing down the rest of the building and then replacing the buildings with brand new modern ones safely behind the facades. It was a nifty idea because it would preserve the historic look and feel of the city, while still building those spanking brand new buildings behind the facades, modern buildings which - at the street level - were virtually invisible.

While reading Anglican Curmudgeon's latest stellar post on Mark Harris' fascinating rant against the Anglican Communion, I remembered this particular row on Pennsylvania Avenue that was worked on while I was at the K Street firm.

As I recall, the entire historic block was demolished - but for the "historic" facades. They were left standing and then the clients built their building up behind the facades. From the street, it looked remarkably preserved. From the air, well, that's quite another thing. 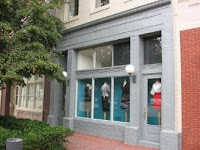 What causes me to pause as I read Curmudgeon & Harris (yes, it does sound like a new firm for K Street) is that there is quite an effort underway - in both political and litigious ways - to preserve the facade of The Episcopal Church, while gutting out its foundational structures so that something modern could be constructed just out of sight of those of us on the street.

Anglican Curmudgeon's post offers us a perspective from the air of what that looks like. He illustrates quite plainly that what The Episcopal Church is attempting to do is in fact, gut the historic faith while preserving the facades of that faith (in many cases, somewhat pointedly, the actual building facades themselves!) while constructing massive new theological and political structures that bare no resemblance to the preserved facades. 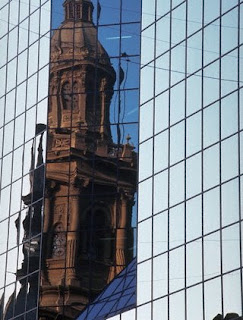 It is no wonder, then, that so much of The Episcopal Church's financial attention has been focused on the facades of the church - on their buildings, their vestments, their unique position in American society, their connection to the British monarchy, and even to the Archbishop of Canterbury himself, when he's useful.

For that's all it is - it's all a shallow facade that's being preserved and we are asked to remain happily - and loyally - down on street level, carrying on as though nothing is being gutted and constructed behind those front doors. We must be careful not to look with curiosity behind the facade, lest we see that what's being raised is anything but the historic faith.
Posted by Unknown at 9:49 AM

Brilliant. The photos give us such a perfect visual metaphor for what the Episcopal Church is trying to accomplish.

A perfect complement (and compliment!) to my post, Baby Blue---thank you so much for making visual what I was only making visceral. I will add a link to this. Do you want to open a K-Street consulting firm?

I can only echo Perpetua, Brilliant!

The whole concept of facade is perfect. Just the descriptor for the abject shallowness of the TEO's 'theology.'

That is a great metaphor; thanks!