Blogging the Oscars LIVE: "They made me do it, Mr. Spielberg, it's pretty slow in town ..."

This could be bizarre since the only film I've seen that has any Oscar nominations attached to it is Dark Knight. Right now it's the Red Carpet reports, which has turned into an event itself. It's just silly. Who cares about the fashions - except if they are a complete disaster? Right now the Red Carpet Guy is asking B-level celebrities who would they save in the room is there's an earthquake during the Oscars. Ohhkay!

What is interesting this year is that the Oscars are being revamped with new direction, including pulling the live orchestra out of the pit and putting them up on the stage aka Benny Goodman and his Orchestra.

We've got ABC on the old telly with the rabbit ears (no, as geeky as we are we don't have cable!) while online we're watching SkyTV live from the UK (where it's 1:30 in the morning).

Oh, it's Hugh Jackman. Who is that? I have no idea. I guess I should know. Stay tuned.

I've looked up his bio and I still don't know who he is. This isn't starting well. At least he's cute.

Supporting Actress is now up! 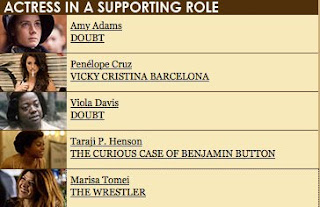 8:47 p.m. And the winner is: Penelope Cruz. Lovely speech, lovely dress. I remember that she was in Bob Dylan's Masked & Anonymous, a brave lady. 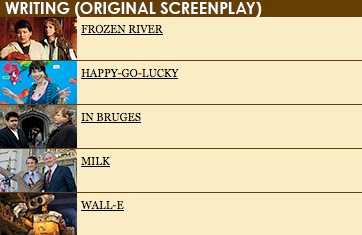 8:55 p.m. Steve Martin and Tina Fey are out for the Best Original Screenplay. They are delightful and the presentation is well-done, especially for a writing award.

Now we have Best Original Screenplay. 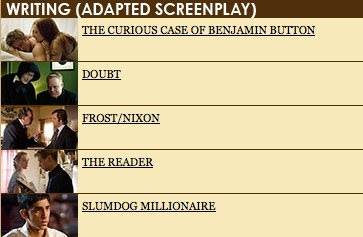 9:01 p.m. And the Oscar goes to: Simon Beaufoy for Slumdog Millionaire, which should win Best Picture.

Well, we can say that there is nothing about this telecast that reminds us of Bob Hope and Johnny Carson. Those days are gone - but this is moving at a peppie pace.

Very professional speech - we'll see him again at the Oscars. 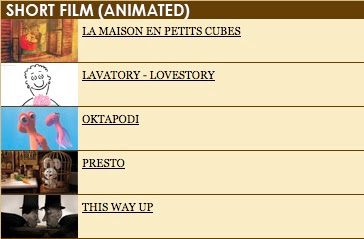 We've come up to the first 45 minutes and they've handed out a bunch of Oscars all ready. This is a major change from tradition where one Oscar is handed out and then we have musical numbers and honorary tributes for the next two hours. 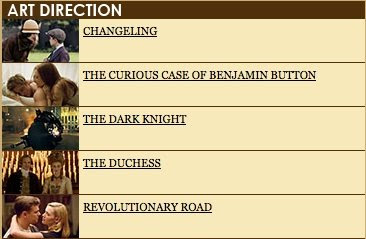 9:17 p.m. Art Direction is now up. And the winner is the Curious Case of Benjamin Button.

We haven't had a musical production yet. 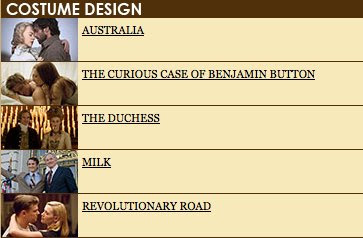 9:20 p.m. Costume Design now: And the winner is The Duchess. Great backdrop set design on the stage.

Now we have make-up. This is moving at a record pace. And the Oscar goes to: The Curious Case of Benjamin Button.

So now we have Twilight (and Harry Potter) star Robert Pattinson. I do know who he is, having sat through two hours of pre-teen screaming to see Twilight in the theatres.

It's clear they are making digital music videos now for the film tributes. New gen. It's quite well done.

Well, it's 9:30 and that was quite a first hour. Wonder what Jack Nicholson would be like if he were in the audience? 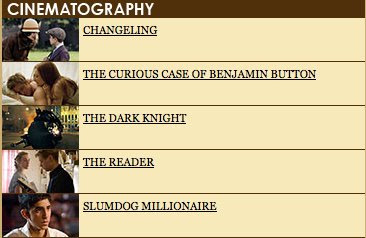 Next up is Cinematography. Ben Stiller - he is funny, sorry. He is funny. What is he doing?

9:35 p.m. Cinematography is an important Oscar for Best Picture, well, usually. And the winner is: Slumdog Millionaire. Right on target.

He totally looks the part of a cinematographer. Rumbled, not comfortable in the suit, longish hair, tells his sons to go to bed.

Now we have the first tribute, but no speeches, no flashback to the sci-awards, just a nice little comment and off to a commercial. Guess the geeks get dissed this year.

9:42 p.m. It does feel like the same people who produce the Super Bowl have taken over the Oscars.

Now they are paying tribute to the films that weren't nominated. That's different. 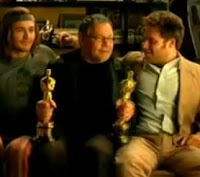 That is my favorite line of the show so far. 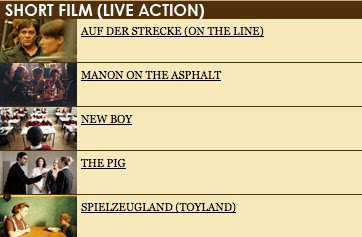 I'm learning more about Hugh Jackman, thinking - is he the 21st century-version of Tommy Tune? It's a great production tribute piece, worth the wait - produced by Baz Luhrmann (Moulin Rouge) and one thinks that doing a dancing tribute to the Sci-Geek Awards wouldn't have had quite the pizazz.

I rather like the videos more than the real-live audience. Lots of applause and shouting and it's all from the past.

Fun group coming out to present more awards. What is this - an awards show? 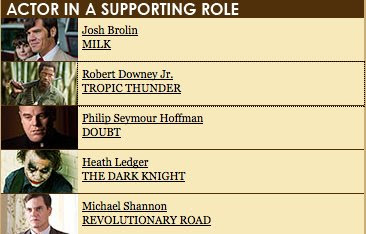 Best Supporting Actor is now up. Five past winners of the award are on the stage to present the award tonight. This should go to Heath Ledger.

Kevin Kline is doing to the tribute to the late actor. Silence in the room. Polite applause. 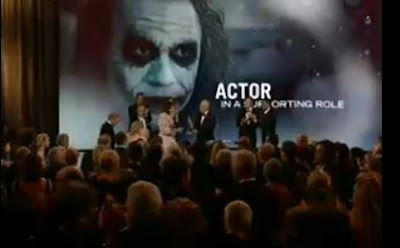 10:07 and the Oscar goes to Heath Ledger. His father and mother and sister are accepting the Oscar.

The transitions are quite well done. It's doesn't seem as canned and predictable. The videos are of a much higher quality. 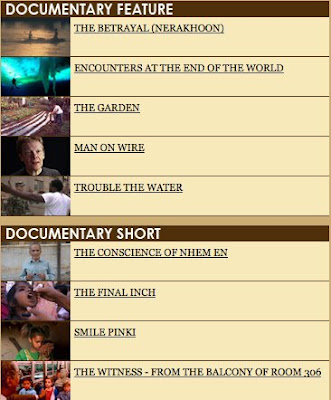 Now it's time for the Documentary Oscars.

Best Documentary: Man on Wire. Nothing is impossible. Even balancing the Oscar on your chin.

Now I guess we'll get the tributes after the commercial break.

One thing that is cool about the Oscars this year is that they are grouping the awards together so they make sense. Now they are going into the post-production Oscars - which we assume will be sound, editing, mixing, effects. And we're getting too see another one of those nifty Super Bowl-style videos.

Now we have Visual Effects. Winner: The Curious Case of Benjamin Button. 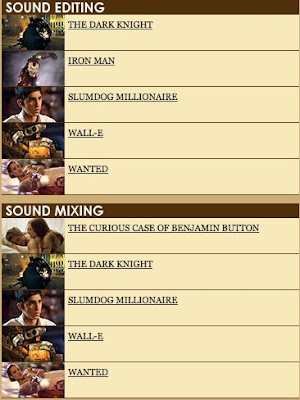 Now we have the Sound awards, first up: editing. The Oscar goes to: The Dark Knight. Yeah.

Well the behind the scenes guys are into film making, not politics.

How many is that now? 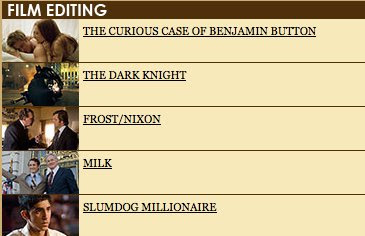 Now we have Film Editing: and the winner is - Slumdog Millionaire. So there we are.

Next up - those tributes, as soon as they finish handing out the awards. Now that's a change. 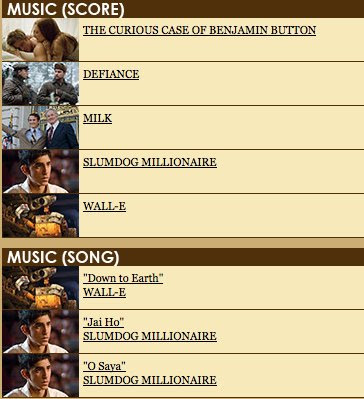 So now we're coming down to the final stretch.

The next one up is for Best Song. The last Best Song that I can actually remember is Into the West for Lord of the Rings: Return of the King.

India rocks, though. We're not getting all those cutaway star shots during the production numbers - sort of wonder if they are all hanging backstage at the wine bar.

And the Best Song Oscar: Jai Ho from Slumdog Millionaire.

I think I count six Oscars so far for Slumdog Millionaire. 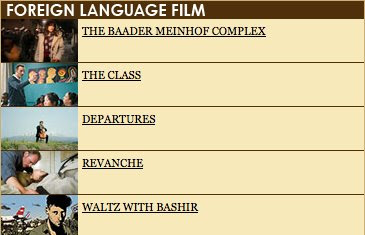 Always nice to see Liam Nielsen. He and the actress from Slumdog Millionaire are presenting the Oscar for Foreign Film.

The winner is Departures.

We've seen so many shots of Kate Winslet, she's just going to have to win the Oscar. Unless Meryl Streep does. But if we could add the shots as a clue, Kate Winslet wins hands-down. Though Angelina Jolie is not far behind her.

Now we remember those who've gone.

Okay, now we have the big ones left. Think we'll go with Mickey Rourke for best actor since he too was in Masked & Anonymous as well. 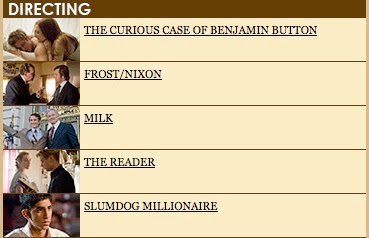 Now we have Reese Witherspoon with the Director's Oscar. Again, often this category also tells us who will win Best Picture, but not always. 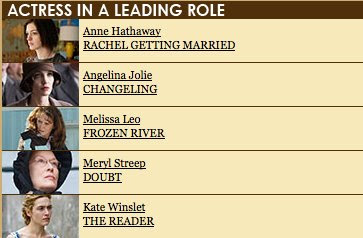 Now it's time for the Best Actress Oscar.

Wow, they've got quite a group handing out the Oscar. Wow.

The actresses themselves pay tribute to each actress and it's quite moving, really. 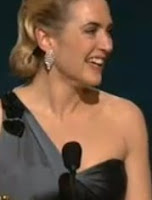 The Oscar for the Best Actress goes to: Kate Winslet. Yeah. And no, it's not a shampoo bottle this time. A heartfelt speech, and dad is in the audience.

Now we have Best Actor and another stellar lineup of winners of the Best Actor Oscar. No wonder the Academy Awards did not release the names of the presenters. 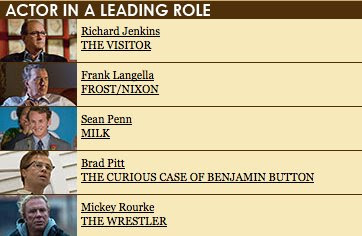 And the Oscar goes to: Sean Penn. Who really is a great actor, though he needs to get out more. 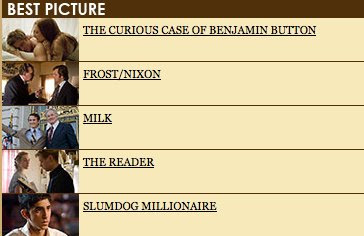 And now it looks like it might be time for Best Picture. Steven Spielberg has now taken the podium to introduce another video - this time of past winners. Another cool video. One starts to wonder whether an audience is really necessary. Still, lots of yelling in the video, and cheering - that sort of gets a bit much after a while, and then spooky reflective music. But it does raise the energy-level thinking that it's fast-approaching midnight about now.

It should be Slumdog Millionaire. It's won most of the big awards all ready.

11:53 p.m. The Oscar for Best Picture is: Slumdog Millionaire.

And the Oscar telecast ends with a revised rendition of Bob Dylan's Leopard-Skin Pillbox Hat. 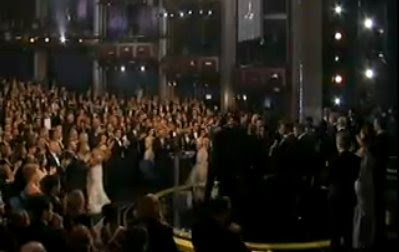 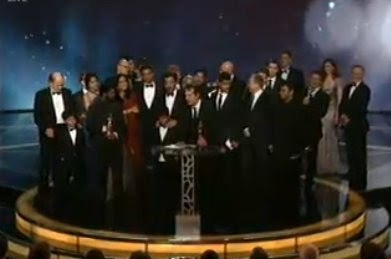 Wish I could stay up to watch but a shortage of sleep this weekend :-) has bested me. Sara J-P's dress looked like a toned-down Good Witch of the North dress. Definitely not impressed with the fashion this time. MW

I'd posted on your facebook, that I hadn't seen any Oscar nominee films, but that isn't true. I'd assumed that Wall-E had been overlooked. I did see that one, albeit on dvd. It definitely deserved the win, it was wonderful.

Your comment re: Bobby Jindal.
That's EXACTLY what I said to the folks at my house as we watched!!!!!