The Tyranny of Dead Ideas? 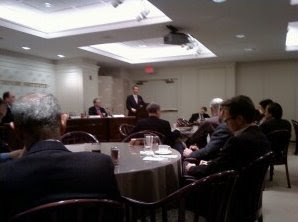 This morning I went to hear a presentation at the American Enterprise Institute, I went to hear a presentation and panel discussion called, The Tyranny of Dead Ideas: Letting Go of the Old Ways of Thinking to Unleash a New Prosperity. The author of a new book by the same name, Matt Miller was attempting to make the case that "political and business leaders have failed to prepare the United States for economic crises because they are slaves to dead ideas."

"These dead ideas include the notions that higher taxes hurt the economy, that free trade is always good, and that money follows merit." Mr. Miller also spoke briefly on "tomorrow's destined ideas" that he believes will eventually replace their dead counterparts. Well, perhaps the notices of the demise of these old ideas is a bit premature.

In other words, I didn't buy it. It didn't sound like "tomorrow's destined ideas" but the same old thing from the 1970s. Raise taxes, increase federal spending, institute protectionism (using new words of course), and disintegrate the individual over the collective and call it good. Mr. Miller's technique of reasoning was creating a strawmen (his old ideas were provocative, but consistently off the mark) and then tearing the strawmen down in favor of the Grand Old Idea that went out with Ronald Reagan and Margaret Thatcher came in. Socialism may be dead in the East, but it's alive and well and kicking in the West and if Mr. Miller has his way, will be served on the menu for the rest of our lifetime. It's the same old thing, just repacked with a new wrapper. If one is going to talk about an "old idea" then one should at least be accurate in what the "old idea" actually is - and one item after another was off the mark.

In fact, at one point one of the panelists said that the problem with America following the health care initiatives that are followed in Denmark and Sweden is that America is not filled with Danes and Swedes. We're filled with Americans - who are still rugged individualists no matter what these folks inside the beltway say. What's gone missing, lately, is our conscience.

Also present was Fred Barnes, executive editor of The Weekly Standard (who reminded me that he went with the church plant that came out of the The Falls Church), Michael Barone and Kevin Hasset of AEI, and my favorite, Douglas Holtz-Eakin, who was the - among other things - the former chief adviser to Senator John McCain's presidential campaign, as well as the former Director of the Congregational Budget Office and the Senior Staff Economist for President George W. Bush.

Mr. Holtz-Eakin didn't buy the presentation's thesis either and consistently pointed out the screaming elephants in room many seemed to be trying to ignore or forget, including the simple fact that ideas are not the same as people. He attempted to put a human face on the issues facing us and why these type of presentations do not - and will not - resonate with the American people. He said it isn't taxes that are the issue, it's spending. I hope he writes a book.

And perhaps the time has come for us to frame our old photographs of Reagan and Thatcher and hang them in our living rooms, lest we forget what good they did, how they changed the world. It seems we have all ready forgotten and that is the real tyrany of dead ideas - that we've all ready forgotten where we came from and what they brought us through. It's not what's new that we find so charming, it's what's old that we've forgotten. Otherwise, perhaps we should just save time and hang that old photo of Jimmy Carter instead.

Here's Matt Miller's recent appearance on the "Colbert Report" which Mr. Miller talked about during his presentation:

Tip of the tinfoil to Perpetua. Thank you!
Posted by Unknown at 11:46 AM

I'm sorry, BabyBlueAnglican, but I'm engage in one of the deadly sins.
I'm envious of you going to all these wonderful events, even if they push socialism.
To paraphrase that old saying, Abilene's not the end of the world, but it ain't far from it.
(Actually, I think they were talking about Cross Plains).

It sounds as though that author is pushing the same ideologies that have lead to the problems being faced in Europe. His talk about higher taxes, is in favor of higher taxes for everyone, and creating an EU like government, eliminating our sovereignty and combining with Canada and Mexico, and bleeding our people dry, while imposing ever increasing taxes on our people who will be denied jobs, and have secular religion shoved down our throats.

Mary, I hope that Egypt is treating you well. Don't wear the burkha too tight!

You mentioned free trade. It is hard to be against free trade, but I just got back from Haiti and had a great talk with an agronomist who reminded me that free trade is not necessarily fair trade. In particular, Haiti was growing 70% of its food 20 years ago. Now, it grows only 40%. U.S. farmers are subsidized to the hilt, and Haitian farmers have a hard time competing. So I am for free AND fait trade.

Hi bb,
You might want to embed this video.

Perpetua, Matt Miller did talk about this "event" on the Colbert Report. Thanks so much for the link!

"There are two kinds of people in the electorate: 1. People who remember how horrible the Jimmy Carter years were. 2. People who are about to find out."