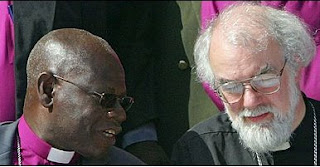 Please note that the AAC's comprehensive report is here - a must read.

Grace and peace to you from God our Father and the Lord Jesus Christ.

I am writing in regard to the recently concluded Primates Meeting in Alexandria, Egypt. Thank you for all of your contributions. I admire how you bear graciously the divergent views and enormous pain they impose. As I indicated at the time I was grateful that we were able to discuss core theological convictions and achieve considerable clarity about our differences. That we were able to do so in an atmosphere of respect and without rancour is not only an answered prayer but it is also a testimony and credit to your role in this outcome and something for which I am most appreciative.

In preparation for the meeting I asked The American Anglican Council to prepare the attached report on the continuing situation of The Episcopal Church to enable people in the wider Communion to have a fuller perspective of the circumstances in North America. I shared it with my colleagues in the Global South but did not release it more widely in the hope that we would receive assurances from the Presiding Bishop of The Episcopal Church and the Primate of the Anglican Church of Canada that they were willing to exercise genuine restraint towards those Anglicans in North America unwilling to embrace their several innovations.

Sadly that did not prove to be the case. Instead we were treated to presentations that sought to trivialize the situation and the consequences for those whose only offence is their determination to hold on doggedly and truthfully to the faith once delivered to the saints. In addition I have learned that even as we met together in Alexandria actions were taken that were in direct contradiction to the season of deeper communion and gracious restraint to which we all expressed agreement. For example, in the days leading up to our meeting, the Diocese of Virginia declared the “inherent integrity and blessedness” of same sex unions and initiated a process to provide for their “blessing”. While we were meeting, The Diocese of Toronto also announced that it will start same sex blessings within a year and The Episcopal Church and the Diocese of Virginia filed further costly legal action appealing the court's decision in twenty cases favouring nine Virginia congregations. These and many further actions are documented within the report.

In our meeting we recommended that you initiate a “professionally mediated conversation which engages all parties at the earliest opportunity.” It now seems increasingly clear that without a radical change of behaviour on the part of The Episcopal Church and the Anglican Church of Canada the only possible outcome of such a process is acknowledgement of a bitter truth that the differences in the words of Archbishop Idris Jones are “irreconcilable”. I know that you are grieved by the continuing brokenness of our Communion but I believe that healing will only come when we face into the true reality of our situation. That is what I am endeavouring to do by releasing this report and a similar document describing the situation in Canada. I assure you of my prayers and determination that we do nothing that will compromise the proclamation of the Gospel of Jesus the Christ that is our only hope.