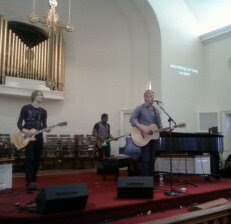 What a weekend! It began yesterday with the Just 10 Conference and continued to today, finishing up with a live concert with Matt Maher and his band this afternoon. Amazing, simply amazing weekend. We had a full day yesterday with teachings on the ten commandments and times for prayer and worship, followed by a Saturday at Seven evening worship service with Eucharist last night.

Today three services, one Eucharist and two reintroducing - after what might have been a twenty-five year absence - Morning Prayer back to Truro on a Sunday morning. 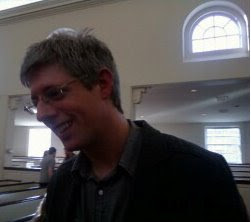 When I first came to Truro when I was a freshman in college, the parish was still doing Morning Prayer three times a month with Eucharist just once a month on Sundays. That changed to Eucharist every Sunday instead in the early-mid 1980s. One of the cool things I'd forgotten were the nifty clergy vestments - so typical of Virginia's liturgical history that was centered for so many centuries on Morning Prayer. It was a far cry from the new emphasis on copes and mitres we mused on earlier - it does seem that the more The Episcopal Church withdraws from it's orthodox foundations, the more elaborate the vestments become. The Morning Prayer vestments reminded me how simple it once was - and still could be.

The worship and teaching and prayer rocked too - quite a surprise, even without the Eucharist. In fact, so much prayer was going on during the end of the last service we skipped the recessional all together! If it weren't for the Matt Maher concert later in the afternoon, there might still be people there praying for one another! 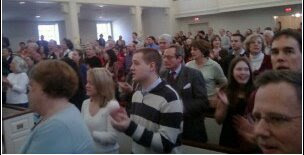 Morning Prayer this morning blended the traditional Episcopal liturgy with worship led by Matt Maher and his band and included great teachings by our new pastor of evangelism, Derek Rust. He concluded his "Just 10" series on the Ten Commandments. With a short break for lunch, we then opened the doors for the concert and Truro was packed again for a wonderful time of weaving rocking praise anthems with tender intimate compositions, written or adapted by Matt.

It was awesome. "I love this place," Matt said at the end of his concert. Well, we loved you too - come back soon!

Here's an interview of Matt with Chris Tomlin on New Song Cafe. They perform Your Grace is Enough as well as teach viewers how to play the song.


You can learn more about Matt Maher's music here.
Posted by Unknown at 9:09 PM

So that's who Matt Maher is! I know it's not right but after reading your description of the prayer, music, and worship at your church today I am practically coveting it! (Can you plant a small Truro parish over my way?)

Back to the discussion on bishop's garb, the rector at our old church came pretty close to ordering himself a zuchetto one day. (He called up a Catholic supply store in town and inquired about them.) Maybe it was an invading TEO spirit? ;o

I'm glad this was such a blessing to you.

Jill C, where are you located?

I love your story - I didn't even know what a zuchetto is. Had to look it up. I realize now it's what I regrettably called a "beanie" at Lambeth.

Bishop Ackerman and his chaplain wore zuchettos (which really do remind me of yamakas and so for me, the connection to our Jewish heritage is cool) during the Lambeth Conference. It's totally appropriate for Bishop Ackerman to wear one. As I wrote earlier, Bishop Ackerman led many of the Eucharists we had in the "Undisclosed Location" at the Lambeth Conference in Canterbury last summer and he took time to explain historic religious customs during his celebrations (they really were teaching moments, instructed Eucharists which again, for this low church evangelical I found illuminating and helpful so I could enter in more fully into the higher forms of Eucharistic worship).

Again, if John Guernsey started wearing one - well, that would be extraordinary.

One of my fondest memories of the incredible gathering of "Plano-Dallas" in 2003 following the General Convention was the gathering of all the Episcopal traditions together in one room. I don't know if such a thing had ever happened before, but it was incredible. I saw all kinds of vestments, including the zuchettos, but also I saw birettas for the first time! I had no idea!

Some of the ordained who processed wore birettas and zuchettos and some wore business suits. It was amazing. What brought us together was something that had been taken for granted for so long, the uniqueness of Jesus Christ, the centrality of Scripture, and the scriptural process of discernment on revelation.

Another thing, no small thing, that was amazing about yesterday's worship services is that Matt Maher is Roman Catholic and he was reaching out across the great divide the our two historic churches. That is the vision the Lord has given him, as a Roman Catholic reaching across the divide to Protestants who love and serve Jesus Christ just as he does.

The Lord is at work in ways I can barely imagine.

But, I guess I have enough Anglo-Catholic in me that I would swim the Tiber before going back to my evangelical background where there is no mystery.

I think we all need to reconise that Anglicanism spread from the Church of England to a worldwide communion with the service of Morning Prayer and not the Eucharist. Holy Communion was something that was done occasionally with careful preparation by each communicant before coming to the table.

Dr. Bob,
Surely you're not suggesting that anyone needs to understand anything about the origins of the Church of England, or are you? Be very cautious amongst whom you share such opinions and whatever you do, never ever use the "P" word.

Ok, maybe I need a little "educating!" I have never attended a morning prayer service, so maybe I spoke out of turn. I do love the Eucharist. That is what lured me from a very well known Evangelical church with a Very Well Known Pastor/Teacher. I have never found a priest who could match up to him. But a Bible teacher was no longer the focus. It became Jesus in the Eucharist. So, I went from 4 times a year as a memorial to weekly. To me, I can hardly wait to receive the elements.