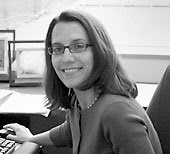 Ah, so while 815 cuts the MDG Goals out of the national budget and the primates meeting is underway in Egypt, Bishop Schori hires a personal litigator to help out with the mounting Episcopal Church lawsuits, apparently with a special eye on Virginia. As we all ready know, The Episcopal Church ignored calls for a cease-fire of litigation by filing an appeal of Judge Bellows' rulings before the Virginia Supreme Court today.

Kostel, who is also chancellor of the Diocese of Washington, has worked in similar areas of law in private practice. She has been associated with the law firms of Shea & Gardner (now Goodwin Procter) and Wilmer, Cutler & Pickering. She was previously a trial attorney for the U.S. Department of Justice, Civil Division.

She is a graduate of Princeton University and the law school of the University of Virginia, where she was editor-in-chief of the Virginia Law Review. After graduation, she served as a clerk for the U.S. District Court in Alabama, and for the U.S. Court of Appeals for the Ninth Circuit.

Kostel is married to law school classmate Gregory DiMeglio. They live in Arlington, Virginia, with their sons, Alexander and Philip, and are members of St. Alban's Church in Washington, D.C.

Her profile has now disappeared off the Goodwin Procter website, though is still available in the Google Cache (and we note that she is a member of the Washington and Virginia Bars only, so we can guess what she's going to be up to). There's more info on the PB's new special counsel from what was once on the Goodwin Proctor website (home of You Know Who):

Mary Kostel, of counsel in the firm's Litigation Department, concentrates her practice primarily on civil litigation involving issues of products liability and toxic torts ... Ms. Kostel was an attorney at Shea & Gardner prior to its combination with Goodwin Procter in 2004. Previous to joining Shea & Gardner, Ms. Kostel was in the Communications and Electronic Commerce group at Wilmer, Cutler & Pickering, where she represented a variety of clients in federal court as well as before the Federal Communications Commission and several state public utility commissions. Before that, Ms. Kostel was a Trial Attorney in the Federal Programs Branch of the Civil Division at the U.S. Department of Justice, where she defended federal statutes against constitutional challenges, advocated federal agencies’ construction and application of complex statutory and regulatory schemes, and represented federal agencies in employment discrimination actions.

Upon graduation from law school, Ms. Kostel clerked for the Honorable Sam C. Pointer, Jr., of the U.S. District Court for the Northern District of Alabama, and the Honorable James R. Browning of the U.S. Court of Appeals for the Ninth Circuit ... At the University of Virginia School of Law, Ms. Kostel received the school’s Margaret G. Hyde award.

There's more on her activities as Bishop John Chane's chancellor in a puffy piece here.

Tip of the Tinfoil from GR.

I wonder if 815 has ever hear the expression about throwing good money after bad - and when they will stop.

Also looks like she was hired to be a "face" to the press, given her work on Communications issues.

While there is an obvious understandable obsession with Virginia, it is a unique situation that win or lose does not impact other contexts.

My bet is the concerns of the dioceses leaving TEO. They've built a case that the diocese is the basic building block instead of the parish, well, that logic suddenly is a problem in San Joaquin and "unfavorable" rulings would set "dangerous" precedence for them.

So, are we to infer by the tenor of this that funds offered by faithful TEC'ers for MDG's have been knowingly and willfully misappropriated for the PB's vendetta against the orthodox? Wasn't this the same thing that sent Jimmy Bakker off to the Gaol for 8 years? Hmmmmm, Just wondering.

Makes me ashamed to be a UVa grad, but I take comfort in the fact that Laura Ingraham is also a Law School grad, and she clerked for Justice Clarence Thomas and a U.S. Circuit Court of Appeals judge. Just the same, I would beware of Ms. Kostel. She is probably very smart and aggressive in her litigation. We can only hope she also suffers from the arrogant over-confidence that often accompanies a "high falutin'" edyucashun.

I would not fear the new hire. Ms Kostel may be smart, but the litigators hired by DioVA up to this point are not dummies.
Even a smart lawyer can look really dumb trying to defend a client who has not only lost touch with reality but is trying to redefine it as they go along.

The most important feature accountable for the success of ecommerce is electronic commerce that allows people to buy or sell anything they want at anytime of the day or night. http://www.infyecommercesolution.com/