Not exactly strangers passing in the night ... 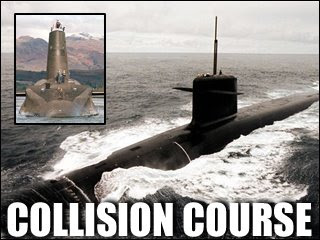 I grew up the daughter of a nuclear submarine skipper, a boomer captain. One of the benefits of this upbringing was that when I read The Hunt for Red October, by Tom Clancy - I understood many of the terms, which surprised me to no end. But it also opened my eyes to what Papasan did for a living, besides periodically bringing me back highland dolls from Holy Loch, Scotland.

With that in mind, just what in blazes is going on with this?

Great Britain and France have always had their cultural differences, but the latest military miscommunication between the two hardly has them shouting vive la difference! This one literally could have gone nuclear.

A couple of elite nuclear submarines, the British HMS Vanguard and the French Navy's Le Triomphant, collided in the Northern Atlantic on Feb. 4 while "conducting routine patrols," both countries acknowledged on Sunday. Both subs are armed with multiple-warhead nuclear missiles.

But the Vanguard and Le Triomphant are also equipped with some of the most sophisticated military sonar devices available, complete with various antennas and sensors that collect information that is analyzed by high-powered computers.

So how is it possible that two nuclear subs of allied countries, both carrying state-of-the-art sonar equipment, could bump into each other? Here's the British response. The Guardian has more here. The BBC has an interesting Q&A here. 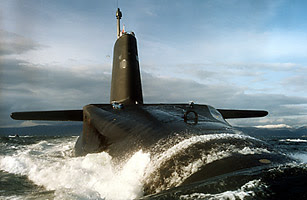 A collision between a British nuclear-powered submarine carrying multiple nuclear warheads and a French nuclear submarine armed with a similar payload may have been the result of lack of communication between France and NATO nations, according to a former British submarine commander whose revelations were partially corroborated by an official at the French navy.

Sometime on Feb. 3 or 4, the British HMS Vanguard and France's Le Triomphant collided in the mid-Atlantic. The accident probably happened because the two submarines were not aware of each other. NATO operates a traffic control system that alerts allied nations to the deployment zones of friendly submarines. The system is designed to avoid collisions. But because France is not part of NATO's military command structure, it does not provide information on the location of its mobile nuclear arms to that system, according to Julian Ferguson, who commanded one of Britain's four V-class nuclear submarines until retiring in 2006. (See a graphic of the global nuclear arms balance.)

"There is a system for operating areas that are reserved for American, British, Norwegian, Dutch and Canadian communities and if you want to go into someone's area of influence you tell them what you are doing. But if you are not in the NATO military structure you don't have to do that," says Ferguson.

NATO sources told TIME that France is not alone in withholding information about nuclear-armed submarines — the Brits and Americans keep the location of their strategic deterrent secret too. In a prepared statement, a NATO spokesman said: "France uses the same procedures with regard to its submarine fleet as all other allies." 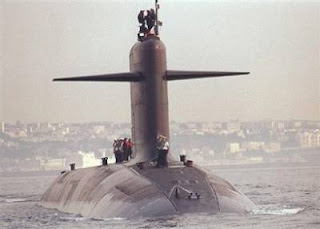 But Ferguson says the French are particularly secretive due to their position outside NATO's command structure. And past policy-level discussions suggest a concern over a lack of communication. In 1994, Britain and France discussed closer co-operation between their navies and a possible carve-up of deployment zones for their nuclear submarine patrols. It took until September 2000 for arrangements to be formalized in the U.K.-French Bilateral Defense Cooperation Agreement. That agreement called for port visits for British and French nuclear-armed submarines and regular exchanges on nuclear policy. (See pictures of the French President visiting the U.K.)

But it's unclear whether it included the exchange of information about nuclear armed submarine positioning, and many arms experts say it probably did not. "The fact that the collision occurred at all indicates that the two allies need to talk more," says Hans Kristensen, who monitors NATO's weapons for the federation of American scientists.

While the intersection of two sonar-equipped nuclear submarines in a vast ocean may seem an unlikely event even without communication, there are environmental anomalies in the Atlantic that make a collision more likely, according to Ferguson. Submarines on a deterrent mission, for instance, tend to congregate in places where they are unlikely to be found by other submarines and spy-planes. "There are oceanographic factors in which you can be on either side of an ocean front where the temperature is slightly different on your side than the others. Where the gulf stream comes across the Atlantic is a prime point of this. Sometimes these barriers can be quite hard — no sound penetrates at all. And if your business is hiding than you would hide in that vicinity. There is an added risk that given the environmental factors maybe you don't hear another submarine in time to do something about it."

The multiple, city-destroying warheads on the French and British submarines are not at risk of detonation from collision, Ferguson said. But had a nuclear reactor been damaged on either boat, it could have poisoned the crew and spread radioactive waste for miles across the Atlantic.

If in fact the collision could have been prevented by better communication between France and NATO, the revelation comes at a politically sensitive time: France is set to re-join NATO's military infrastructure in April. Its secrecy policy on the location of its nuclear-armed subs could come under fire before then, especially as the French say they will not budge on the issue. Explains Erulin of the French Navy: "Because this is so essential to France's strategic defense interests, this is something that will be maintained even after French is fully reintegrated into NATO's military command structure."

Read it all here. Listen to the NPR report here.

How is it possible, you may ask, dear BB?

Think King Arthur and the French in "Monty Python and the Holy Grail"... (hee, hee)

This is odd, my friends I told you about, who graduated Radford ten years behind you, who I met hanging out just down the street from Truro ... guess what her dad did (though unsure if Attack or Boomer).

These are very quiet boats. It's not too surprising they didn't hear each other.

Equally or more inconvenient when accomplished under the sea.