Day Three of the Primates Meeting 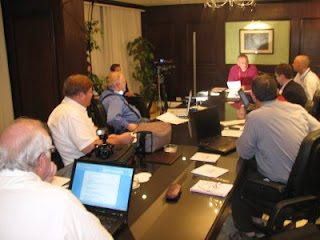 From The Living Church:

A presentation by the Windsor Continuation Group (WCG) to the primates’ meeting was scheduled for two hours on Tuesday morning, but spilled over into the afternoon.

In December, the WCG met at the Diocese of West Texas’s conference center and prepared a final draft of its report to the primates. The report was given to the primates Tuesday, but placed under a media embargo until the close of the conference. The news blackout extended to the day’s press conference, where the primates’ spokesman, the Most Rev. Philip Aspinall of Australia, would say only that the archbishops discussed the report over two sessions. 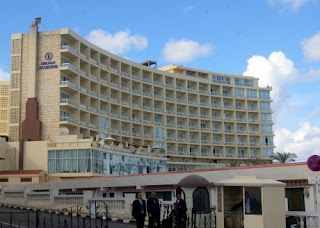 Primates contacted by The Living Church declined to discuss the issues raised in the meeting, but all agreed the primates had been candid in sharing their views.

Archbishop of Canterbury Rowan Williams chartered the WCG in the wake of his Advent letter to the primates in 2007. The group was asked to advise him on the “implementation of the recommendations of the Windsor Report, how best to carry forward the Windsor Process in the life of the Communion, and to consult on the ‘unfinished business’ of the report.” The six-member team offered three presentations to the bishops of the 2008 Lambeth Conference.

Read it all here. George Conger has more here.
Photos by ColinCoward and George Conger.
Posted by Unknown at 9:40 PM