Rowan Williams delivers his Presidential Address to the ACC-14 in Jamaica: A Glorious Failure 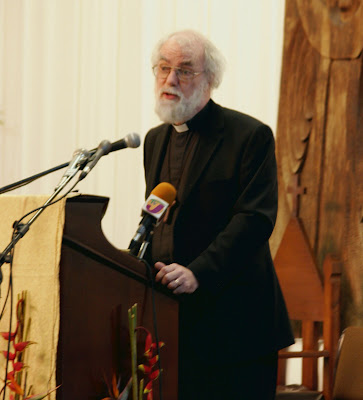 He gives a very measured, very controlled, very deliberate speech to the Anglican Consultative Council this evening, noting that perhaps there might something he calls an "intensely-felt stand-off" underway.

He sounds weary, how could he not, but attempts to strike an optimistic tone even as he speaks sadly in the midst of what he calls glorious, if not miserable, failure. He takes the position in his address as if he's an outsider, a commentator himself, watching from the outside, walking about like a headmaster having a "sit-down" with a naughty-class.

The possibility of division is there, Rowan Williams says when it comes to addressing the Covenant. Will it be a federation of dispersed associations where some are bound strongly to one another and some less, he asks? How do we preserve the structures that will allow us to do what we still want to do together? How do the instruments of Communion continue, as organs of life-giving exchange even as other coalitions and alliances are established? Good questions, your Grace.

He chastises the gathering for "ceaseless rhetoric of fear and competition and rivalry and resentment." He advises that a little tutorial on how to do resolutions might come in handy for next time. Here he is as headmaster, having a little chat with a rather unruly class after a disastrous field trip gone awry. He admonishes the gathering to play nicely, don't be mean, and share your toys.

The real church just happens, he adds. Wonder if Cranmer, Ridley, and Latimer would say about that, that real church just happens as they are burned up? On the other hand, the present Archbishop of Canterbury says he hopes for the failure that lets the glory thorough - and quite frankly, perhaps on that point, the martyrs would agree.

Here is the audio of Rowan William's Presidential Address:

"The possibility of division is there, Rowan Williams says when it comes to addressing the Covenant."That's an astonishing insight.

Yes, Rowan Williams speaks of the possibility of division; but he is speaking as if it were not happening already. That is why this is in substance an unrealistic speech.

BB - I hope your rosy view of the ABC has changed in the face of the facts.....

Also, note that no mention re litigation any more....KJS has him under control, after all - she pays the piper

"ceaseless rhetoric of fear and competition and rivalry and resentment."
except of course that he could cease the fear, competition, rivalry, resentment, and division overnight...

simply by reaffirming Lambeth 1.10 as the eternal statement of the faith;
simply by throwing TEC out of the communon;
simply by saying to Shori "I never knew you" and to Duncan "welcome home my brother!"

It is because he has refused to do these simple things that the communion has been destroyed
For the rest of us - and yes that starts with Sarah Hey - it is to FOCA and APNA that we turn, to GAFCON that we will go every then years, and to the FOCA Steering Committee we pledge our allegiance!

Notice how when the ABC describes the "small achievements" made by that meeting of the ACC, he includes: "we woke up every morning ..."

My grandmother used to say that every morning you woke up, stretched your arms and DIDN'T hit the sides of a coffin was a good day.

Seriously, it's clear he would have us together as an "agglomeration" rather than not together at all. Can we live with that? It doesn't seem TEC can, especially if that means a parallel province. Could Nigeria, if it meant a parallel LGBT-friendly province?

"...glorious, if not miserable, failure."
This reminds me of the words of Zorba the Greek following the collapse, like dominoes, of his project. "What a splendiferous mess!"

I've said it before and I'll say it again this man needs to stand-down. His fifteen minutes of infamy are so over!

Several provinces have shown their willingness to enter into a covenant by doing so- the Jerusalem Declaration. The issue here is not whether some provinces want a covenant relationship. The issue is that not ALL provinces want one. And that has been clear from the very beginning. A covenant cannot be crafted that will be acceptable to both Nigeria and TEC. The archbishop is naive to think that he will ever put together a document acceptable to both. He has 4 options- A covenant acceptable to TEC, one acceptable to Nigeria, one acceptable to neither but acceptable to the "moderates" of the Communion, or no covenant at all. TEC wants the first or the last, and will expend all its energy on the project. Their goal is clearly to drive the Gafcon provinces out of the Communion, and, from what one reads in the HoBD- provinces such as SE Asia and Middle East as well.
That would, of course, result effectively in 2 Communions- A western Eurocentric one that has an ASA of maybe 5 million but claim to the see of Canterbury, and another of 40-50 million, vibrant and alive and spreading the Gospel world-wide. A see in Alexandria, perhaps. And if you want a wild dream, seeking full communion with Antioch and Constantinople and Moscow 50 or 100 years down the road. That is what I see in the future, if TEC is "successful" in destroying the Covenant.
Jesus Christ is the head of The Church. One forgets that at one's peril.