Province Three of the Daughters of the King hold annual retreat: Episcopalian and Anglican women join together for extraordinary weekend

I'm here in the lobby of the Fairview Park Marriott in Falls Church, Virginia after a terrific retreat with the Order of the Daughters of the King encompassing all of Province III. Province III includes all the dioceses in Delaware, Maryland, Pennsylvania, Virginia, West Virginia and the District of Columbia.

The retreat welcomed 161 representatives from Province III. There were many things about this retreat that made it special. One though particularly stands our for me - it was an amazingly display of unity (and not without some challenges, mind you!) of both Episcopalians and Anglicans dioceses and parishes that are included in the Order of the Daughters of the King Province III.

We also welcomed the DOK National President Joan Dalrymple who joined us for the entire retreat. Joan will be leading the Triennial in July in Anaheim.

At the retreat this weekend we didn't focus unity - our focus wasn't on unity. The focus was on the cross. In the cross we found unity. That was a major lesson. 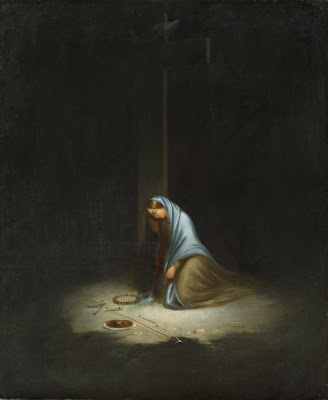 We had Episcopal, Southern Cone, and CANA clergy present. What caused us to open our arms to one another was simply the power of the cross of Jesus Christ, whom the DOK recognize as our King. The cross bears all our sins, all our pain, all our troubles, all our confusion, all our anger, all our bewilderment, all our self-righteousness, and all our life, love, joy, peace, and hope. It is the Cross of Christ.

The idea of Province III-sponsored was the inspiration of former Diocese of Washington DOK President, Barbara Banks. Barbara envisioned retreats for spiritual renewal on the provincial level (I attended my first one last year) and she planned much of this year's retreat as well. Sadly, we lost Barbara after her extraordinarily brave fight against cancer last year - we miss her terribly - but her vision lives on.

In fact, her two daughters joined us this weekend as well.

One of the major themes of this weekend was "Standing in the Gap," a call to the Daughters of the King - Anglican and Episcopalian - to stand in the gap in what was called our "spiritual" Gettysburgs, conflicts so fierce they seem insurmountable, but that Christ calls us to stand in the gap in the power of the cross. The Daughters were commissioned this weekend to do just that.

When we are at the foot of the cross - and it can be simply astonishing difficult at times to get there - then we all recognize (Anglican and Episcopalian) our glorious failures, our lack of love, our lack of humility, our lack of hope, joy, peace, perseverance, kindness, patience, endurance, forgiveness, love. All of us - not just "them" but "us," not just "you" but "me." We are literally united in our brokenness.

What a difference it was for us from when we all arrived on Friday to when we left today. I sat with an Episcopal DOK member from a church here in Virginia that is often on the polarized other side of the fence in our current troubles from me. But there we are, sitting at the table, sisters. The cross has that effect on people.

And it's Pentecost, when the Holy Spirit is poured out onto the Church - for service. The praying went on last night until 1:30 a.m. this morning, the wee hours of Pentecost. It's just wouldn't stop.

I pray that the Order of the Daughters of King will continue to stand in the gap through this great crisis that the Anglican Communion is walking through. Nothing is insurmountable for the cross - nothing. Nothing. Getting to the foot of the cross, though - that can be a challenge. It was a challenge this weekend, indeed - but when it came to the end and we sang this song, it was true. In Christ alone our hope is found.

What is the Order of the Daughters of the King? Here's the official statement:

The Order of the Daughters of the King was founded in 1885 by Margaret J. Franklin at the Church of the Holy Sepulcher in New York City. The Order of the Daughters of the King (DOK) is a spiritual sisterhood of women dedicated to a life of Prayer, Service and Evangelism. We have made a commitment to Jesus as our Savior, and we follow Him as Lord of our lives. We are an Order for women who are communicants of the Episcopal Church, churches in communion with it, or churches in the Historic Episcopate. Today our membership includes women in the Anglican, Episcopal, Lutheran (ELCA) and Roman Catholic churches. An Order is a community under a religious rule; especially one requiring members to take solemn vows. We don't just enroll as members and attend meetings; we take life-long vows to follow the Rule of Prayer and Rule of Service.

Us fallen sinners, unity is always difficult, even with very like minded. You may have had an advantage since with such raw wounds, you knew you had to fight that difficult path to the foot of the Cross, where if all in Truro ladies might take it for granted.

I'm glad you had a God size problem so the Lord could meet His daughters in a special way that ONLY the Lord could have done it. A true reminder of what happen in Jerusalem that day we calibrated of when the Spirit was infused with the Apostles.

Mary,
Your Province is very blessed indeed. Unfortunately in our Province 8 it is not so. We have had very divisive moves by the Prov. 8 Pres. and the Remain Episcopal's and we do not have what you ladies experience there in Province 3. I am so glad that you are were able to experience the way God would have us all behave in unity and to focus on Him and His sacrifice and not on money, numbers, and property. It just hasn't been able to be that way here in Province 8 sadly.

But God is good as He has helped to birth a new Order for Anglican women who have been disenfranchised by the National DOK due to their leaving TEc parishes to join another continuing churches and have been told "No" that they cannot form a Chapter in that church. There are many out there who are Daughters at large with no chapter home but now God has helped us to give them one. You have a unique situation that is not possible in the majority of the US now. I am pleased that you do but I am equally pleased to know that all Daughters will have a place to live out their vows with no strife or reservation about the connection to TEc that will hinder her commitment she has made or for those who want to make that vow but cannot due to the connection to TEc that DOk has.
They are still prayer warriors but they will be Daughters in a different Province.

We are praying for Province VIII. I know it's tough. It's not easy to find our way to the foot of the cross. I know. But there's no other place to go.

BB, you might want to change your headline to reflect the fact that Episcopalians are Anglican also.

Episcopalians generally (generalizations always are lacking) think of themselves as Anglican and like the term to describe their historic links to the English Church and its rich liturgical and intellectual history. The two words should never be used to describe a divide or distance. They are bound together inextricably.

BabyBlue,
We have found our way to the foot of the cross with and within the new Order of the Daughters of the Holy Cross. God has blessed us richly just in the 2 years that the work was being done and He contiues to bless us and feed us and guide us and there are so many Anglican women that have been told "no" by the Nat.'l DOK that now they can here the word "Yes" from an Order that is Anglican and that welcomes as well other historic episcopate not only Lutherans, RC, but also APCK, and APA, just to name a few. These women are prayer warriors and God loves them just as much as he loves the episcopal daughters. No one prayers are more heard than another and no one Daughter who has been baptized in the Name of the Father, the Son, and the Holy Spirit being adopted into the Family of Jesus Christ should be left out and told no. I just don't think that God would be very happy with that type of thinking and doing.

The women going into and beginning this new Order are women of courage, faith and faithfulness, dedication and so much love of her Father in Heaven that I am proud to call them Sisters in the Family of Christ Jesus. They just want to pray & serve and bring others to Christ on Christ's terms not their own.

13 Now when Joshua was near Jericho, he looked up and saw a man standing in front of him with a drawn sword in his hand. Joshua went up to him and asked, "Are you for us or for our enemies?"
14 "Neither," he replied, "but as commander of the army of the LORD I have now come."