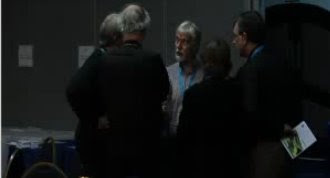 A must-read from Phil Ashey tonight:

What happened today with the Anglican Covenant and the Windsor Continuation Group(WCG) Report?

I have just spent all day observing ACC-14's decisionmaking plenary sessions here in Kingston, Jamaica. I would like to offer several observations:

The failure to pass a "fourth moratorium" on litigation

As we reported two days ago, the Anglican Communion Office, speaking through Bishop Gregory Cameron, could not explain why the moritorium on litigtion, unanimously voiced by the Primates at the Dar es Salaam meeting, was not included among the Communion Moratoria in the WCG draft resolution. In fact, the WCG report to the Archbishop of Canterbury included the fourth moratorium in paragraph 4, and noted that the current failure to observe this moratorium was exacerbating the "interventions" in North America.

When a resolution to add this fourth moratorium was moved today, the Presiding Bishop of TEC rose to complain, among other things, that such a moratorium would enable congregations leaving TEC to "alienate their property."

As usual, nothing could be further from the truth. The key principles set out in the appendix to the Dar es Salaam Statement required both parties "to give assurances that no steps will be taken to alienate property from the Episcopal Church without its consent or to deny use of that property to those congregations." (WCG Report to the Archbishop of Canterbury at paragraph 34, footnote 11, page 7). It is exactly the kind of "standstill" begged for by +Rowan Williams in his presentation of the WCG Recommendations, where he called all parties to take a step back from what they are doing - that we owe it to the Lord of our Church to do so.

Dr Williams has read the report. He presented its recommendations to the ACC-14. He was present at DES and read that Statement too. Yet he allowed the misrepresentation of the Presiding Bishop to stand, without comment.

Later, after a narrow vote of 33-32 defeating the inclusion of the fourth moratorium (BB NOTE: You can see why Phil Ashey was booted out of the ACC - no one cares about who the province and provinces send to represent the province - until now, that is, and we can see in this vote exactly why), Bishop Bill Godfrey of the Southern Cone moved for the addition of a clause to paragraph (e) on the need for urgent conversations, to add a specific listening process for those who are "in litigation." He told ACC-14 that he had personally spoken with the Presiding Bishop of TEC and that she had agreed to such an amendment and such a process!

Then Dr Williams rose to say that such an amendment was unnecessary in light of the other WCG recommendations approved by ACC-14 - including "professionally mediated conversations," (the likelihood and merit of which I have already addressed several days ago) - (BB NOTE: Read more here and here).

Given the opportunity to commend and endorse a joint resolution by Bishop Godfrey and the Presiding Bishop for a listening process for those in litigation, Dr. Williams personally spoke against it. 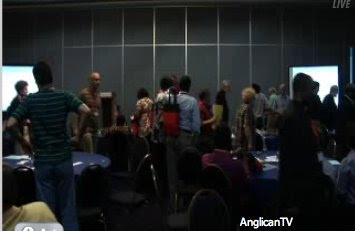 The amendment deferring the Anglican Covenant for another 6-7 months

I can hardly find words to describe the melee of confusing resolutions, amendments and parliamentary procedures that held the Ridley Cambridge Text of the proposed Anglican Covenant hostage for most of the day. Those of you who followed our live blog will appreciate the terrible spirit of confusion that was over the discussion today. Thank God for my fellow Ugandan delegate (who was seated), Mrs. Jolly Babirikamu, for her courage in calling the introduction of new resolutions which were out of order exactly what they were - instruments of confusion. Thank God for her courageous call to pray against a spirit of confusion.

After she spoke, there was a breakthrough. The "Resolution A" that would delay the implementation of the Anglican Covenant was decisively defeated by a vote of 47 to 17 with one abstention. That resolution included the following language of delay:

Please understand: Section 4 is the section that describes the principles for accountability and conflict resolution. As Archbishop Drexel Gomez and others have stated throughout this week, the proposed Anglican Covenant is not a covenant without this section. If Resolution A had passed, it would have deferred the presentation of the whole Cambridge Ridley Text of the Anglican Covenant to the Provinces, including section 4, until after the next meeting of the JSC - months from now.

Or so we thought.

For when a delegate from South Africa rose to add this very same language from the just-defeated Resolution A to another resolution, and the Chair of the ACC-14 ruled that she could not introduce this language - since it had already been voted on and defeated in Resolution A, guess who rose to speak on her behalf?

You guessed it - Dr Rowan Williams, Archbishop of Canterbury, President of the ACC, who has been talking with us all week long about the urgent need for a Covenant, and about our urgent need for "Communion with autonomy and accountability rather than autonomy with communion."

Dr Williams rose to the microphone and told the Chair that, actually, he was concerned that some people might have voted against Resolution A thinking that the language of delay could be added by amendment to Resolution B. He didn't want them to be denied that opportunity.

He spoke in favor of including the language of delay - despite the points of order raised by Archbishop Mouneer Anis and others that such language was out of order since it had already been ruled out. The language I quoted above was moved and added to Resolution B by a vote of 33 to 30, with two abstentions. Without a doubt, the words of Dr Williams contributed to both the confusion surrounding this vote, and the narrow margin. 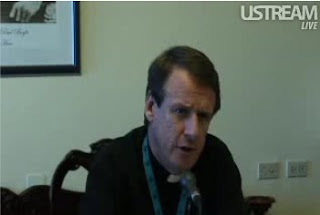 The Anglican Communion must now wait until "a small working group" - appointed by Dr Williams and Secretary General Kenneth Kearon consider and consult with the Provinces on Section 4 and its possible revision. The Anglican Communion must now wait until that group's report to the Joint Standing Committee (JSC) when it meets next - "sometime before the end of the year," according to Kearon (BB NOTE: who qualified that by saying he didn't really know, he didn't have the authority to set the timeframe).

No text of the Anglican Covenant will be sent out to the Provinces until this work has been done. And this at a time when, in the words of Dr Williams, the Anglican Communion is likely to rupture and fly into further chaos and division.

To whom do we owe our allegiance? Is it the Anglican Communion or is it Christ?

If it is Christ then it is time to flush this mess called the Instruments of Communion and move on...

Maybe this is the climax and GenCon09 only the falling action to this story. How can GAFCON construct the Jerusalem Declaration and get everyone on board in such short order and the Covenant process not be ready after three drafts and as many years? Each of the instruments has failed in succession. Canterbury Anglicanism is now less viable than GAFCON.

I can hardly find words to describeHow about treason?

First of all, and lets be very very clear about this. Orombi was so right not to attend this meeting. Clearly he has been completely vindicated by maintaining and strengthening his boycott of Lambeth, by further boycotting the ACC!

I've heard a rumour, finally, that at least one other GS primate (probably Nigeria) won't be back at the meeting tomorrow - and several more entire delegations will not be back at the JSC - assuming that meeting ever happens.

So while this may look like a victory for the liberals, let us be clear what it is --- probably the "tearing" of the communion has finally turned into an unbridgeable divide. Today will go down in history as the day the Global South finally realised that the liberals would never, ever repent and turn to Christ: and that GAFCON must finally obey Christ's command to shake the dust of the feet, and leave.

To which one can only say:

There is no "fourth moratorium", BB. The text of the section of the communiqué of the 2007 Dar es Salaam conference, a part (and ONLY a part - see text below) of which Chris Sugden & Co would dearly love to see become a "moratorium", reads “The Primates urge the representatives of The Episcopal Church and of those congregations in property disputes with it to suspend all actions in law arising in this situation. We also urge both parties to give assurances that no steps will be taken to alienate property from The Episcopal Church without its consent or to deny the use of that property to those congregations”.

B. The so-called "moratorium" also urges "both parties to give assurances that no steps will be taken to alienate property from The Episcopal Church without its consent or to deny the use of that property to those congregations".


"I am aware of God’ s timing. I am very disappinted. I will not let this stop me doing Gods mission. But I am not going to go on mission now as the Anglican Communion.  We will go on our own way.  Right now the mission is delayed.  There will be separation"

Any Christian who relies upon Rown Williams to do the right thing is being foolish. For all his rhetoric and erudition, the only things he will ever do are delay and compromise with infidels.

So there we have it:

The Nigerian delegation are leaving the ACC now.
"To our tents O Israel". GAFCON will reconvene, confirm the Jerusalem Declaration as the basis for the true communion, and formally break communion with those who are not in conformance - including the CoE. Rochester (most likely) will head up the APUK.

It's all over bar the shouting - and there hasn't even been that much shouting.

Orombi is the only primate who comes out of this looking good. No doubt Akinola wouldn't have made the mistake that his successor did (and sent the Nigerian delegation to the ACC) but at least, finally, the situation is quite clear.

I mean let's face it: it was obvious ever since the Lambeth vs GAFCON split last year that GAFCON was leaving the ACC - and now that is finalised.

I doubt that "GAFCon" will leave the AC. Rather, the have had enough of the pointless "listening". ABp Orombi is building bridges that aren't through the instruments of unity (Ha!) such as New Wineskins and Anglican Men's Weekend.

It doesn't matter much about then next JSC or whatever. Attend or not attend. A big yawn to those charades.

well you well be surprised

there will be consequences of this betrayal.