Candidates stands for election as new chair of the Anglican Consultative Council; Bishop Gregory Cameron goes to the mat from the Communion

Chris Sugden gives an overview of recent events as the Anglican Consultative Council meeting continues in Jamaica. Yesterday most of the business was conducted in the morning with the afternoon off for touring.

Over the next 24 hours the election will take place for the chair of the Anglican Consultative Council. The four candidates for election which will take place on Friday are all members of the Standing Committee of the ACC.
There was an opportunity for members to see the candidates show their paces as members of the Standing Committee chaired and presented the discussion and reports of the Network Discernment groups. 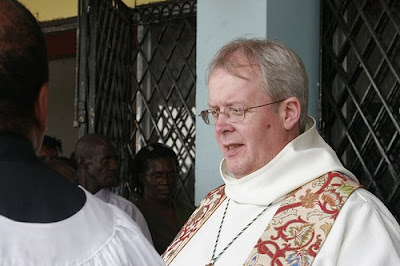 However, there is no doubt that the outstanding performer at the conference so far has been Bishop Gregory Cameron, the former Deputy Secretary General and Director of Ecumenical Studies of the ACC for the last six years who is now Bishop of St Asaph.

He has borne a great deal of the public weight of this conference.

On Monday when Archbishop Drexel Gomez made the presentation to the council on the Anglican Covenant process, Cameron handled many of the questions from the press at the press conference.

On Tuesday, the Archbishop of Canterbury presented the Windsor Continuation Report since it was a report made to him, but it was Cameron who spoke alone to the media about it on Wednesday.

On Tuesday and Wednesday he was the secretary to the plenary for presenting and amending the text of resolutions on the Powerpoint screen.

On Thursday, Bishop Cameron made his own excellent presentation on the work of the Inter-Anglican Standing Committee for Ecumenical Relations and he will address the press on Friday about the report. This report outlines four principles for Anglican engagement in ecumenism which are in brief: 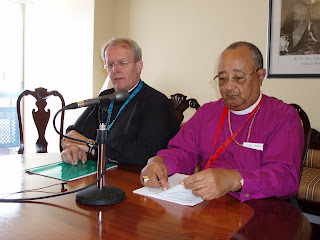 It is the unanimous and warm consideration of the participants that the ACC has lost an excellent person through his appointment to the bishopric in Wales and that he will be hard to replace. Two of the groups of which he has been secretary have ceased their work, the Windsor Continuation Group and the Inter-Anglican Standing Commission on Ecumenical Relations.

He made his presentation on the ecumenical relations of the Anglican Communion with energy, passion and enthusiasm as one whose heart and soul was in his work and wanted to enthuse others about it. He spoke of the enormous enrichment and joy he had experienced in meeting members of the Lord’s worldwide family in its many expressions.

He ended with a good joke for the files.

"A senior Christian leader, well versed in ecumenical affairs, died and went to heaven. At the pearly gates, St Peter asked if there was anything he would like. Our hero asked for a tour of heaven. Peter offered him one for the next day which was Friday.

"On Friday, Peter took his new guest to a marvelous barbecue, overflowing with every kind of meat dish. He explained that these were all Roman Catholics who in their earthly pilgrimage had only been allowed to eat fish on Fridays, so now they were blessed with a marvelous meat barbecue.

"The next port-of -call was to a bar where all kinds of wonderful cocktails and drinks were available. These were all Methodists who on earth had not been allowed to drink.

"Then they visited a hall where people were singing and dancing, raising their hands in Alleluias and obviously pentecostal praise worship. These were the Quakers who on earth had been called to worship in silence and reflection.

"Finally they came to a room where the people were sitting around in somewhat uncomfortable silence and unease. These, Peter explained, were Anglicans who on earth had been allowed to do whatever they liked." 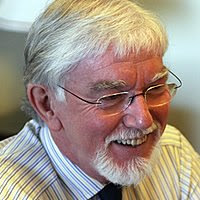 At the press conference, Lay Canon John Rees, who is the legal adviser to the ACC, was asked about the new constitution of the ACC. In particular he was asked about the role of the Joint Standing Committee. He pointed out that the reason for the constitutional amendments was that the former arrangements had left the trustees of the ACC, their Standing Committee, severally and personally liable for its financial obligations. Thus when there was a half-million pound debt on the refurbishment of St Andrew’s House, this was, for the time being, a debt personally for the members of the Standing Committee. This has now been cleared by the Province of Hong Kong turning a half-million pound loan into a gift. This was, Secretary General Kearon announced, the largest grant the ACC had ever received (until now of course with the most generous offering from Morehouse College).

Canon Rees was asked what was the relation between the JSC and the constitution of the ACC. He replied that the JSC had the duty as trustees of the ACC to see that the overall purposes of the charity were sustained; if they thought the underlying purposes of the charity were being undermined they needed to take appropriate decision. The purpose of the charity is the advancement of the work of the Anglican Communion as a fellowship of churches. There is no governing document for the Anglican Communion. There is only a collection of documents which describe the way in which the provinces operate. The JSC are the trustees of the charity, and it is therefore within their rights to make decisions (such as the one to exclude the Ugandan clergy delegate) given their overriding duty to see that the purposes of the trust are fulfilled. Thus it would appear to observers that the JSC can override the constitution or adjudicate on any ambiguities if they deem necessary.

Canon Rees also declared that one cannot be anything but aghast when Christians take each other to court; that it was always deeply dismaying when Christians think they have to resort to the courts when they cannot resolve issues in other ways. He said he was very conscious of disputes where many efforts are made to resolve them through mediation and other processes. But in the last resort the courts are there to resolve issues that cannot be resolved elsewhere. It is dismaying when Christians cannot resolve things. However there comes a point when trustees have to act to protect their trusts, and they resort to the courts to do that if those interests cannot be protected in other ways. But it is deeply dismaying when Christians find themselves so deeply in disagreement on some issues that that they cannot find a way through to resolve these matters in a way that is mutually beneficial.