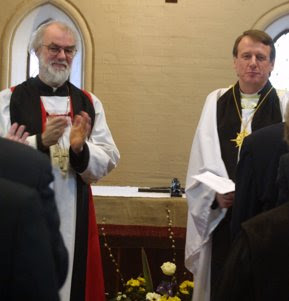 The Anglican Covenant has been sent to provinces all ready, apparently, "seeking their comments on Section 4 of the Covenant." The deadline to hear back from the provinces is November 13, with this new Working Group planning to meet Nov. 20-121. It is then expected that the Working Group will report to the Joint Standing Committee (now being called just the "Standing Committee") at it's Dec. 15-18 meeting. Then what? Head to the pub and sing rousing choruses of the Unicorn Song? From here:

The text of the Ridley Cambridge Draft of the Covenant received strong support at the recent ACC meeting in Jamaica. However concern was expressed that Section 4 had not received the same degree of Provincial consideration that Sections 1-3 had. ACC-14 proposed that Provinces be given time to consider Section 4, that a small Working Group be set up to consider adjustment to Section 4 of the text in the light of Provincial responses, and to ask that Group to report to the Standing Committee before the end of the year.

The Archbishop of Canterbury and the Secretary General have now announced the names of the Working Group. They are:

All have been involved in the Covenant Process to date. Staff support will be provided by Neil Vigers (Anglican Communion Office) and the Revd Canon Joanna Udal (Archbishop of Canterbury’s Secretary for Anglican Communion Affairs).

Meanwhile the Ridley Cambridge Draft text of the Covenant has been sent to Provinces seeking their comments on Section 4 of the Covenant. Responses are requested by 13th November this year. The Working Group will meet on 20 - 21 November in London and report to the Standing Committee meeting of 15 - 18 December.