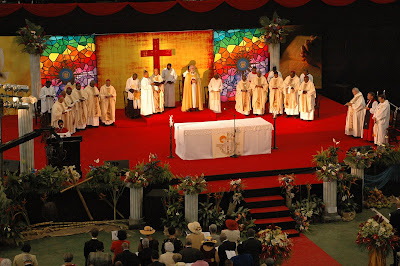 Archbishop of Canterbury Rowan Williams leads Eucharist with Anglican bishops from the West Indies today at the National Arena as the meetings of the Anglican Consultative Council begin in Kingston, Jamaica. 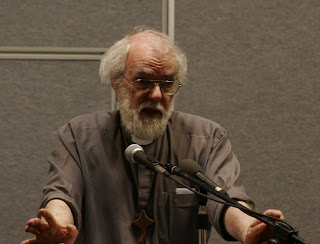 The Anglican Consultative Council (ACC-14) began on May 2,2009 in Kingston Jamaica. A quiet morning session was led by the Archbishop of Canterbury, which concluded with a noonday Eucharist. The delegates next met in discernment groups to begin their discussions about the issues before the council. In the opening plenary session three bishops- the Dean of the Province Bishop Errol Brookes, the Diocesan Bishop Alfred Reid and Bishop of the host city Robert Thompson extended a warm welcome to the delegates. 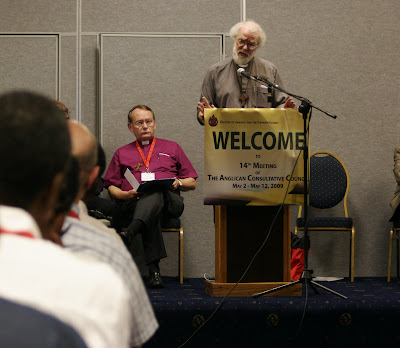 The ACC has both a chair (Bishop John Paterson) and a president (The Archbishop of Canterbury) and their opening remarks are presented in this podcast.

In what may turn out to be one of the most memorable parts of ACC 14, 10,000 Anglicans from all over Jamaica came to the National (Indoor) Arena for a grand opening festival eucharist. Many had got up at 3:30 a.m. to come by bus from Montego Bay. Anglican churches in Kingston and elsewhere in Jamaica closed to meet at this service. Churches in Jamaica have an average attendance of around 200 so the chance to be part of a larger gathering was not one to be missed easily.

"I have come because this means everything that is good" one worshipper told me. Another told me: "God is alive - people are coming to worship him". In fact, so many came that even the two tented overflows were full and some were disappointed and had to be turned away. Most of the attendees were women - some with younger children. The men present were mainly over 50. I was told this was a usual pattern in many such churches where women come to church to find space for God.

The attraction, a West Indian bishop told me, was the opportunity to see and hear the Archbishop of Canterbury. The Governor-General attended along with the Attorney General and the Honorable Portia Simpson-Miller, former prime minister and current leader of the opposition, who got by far the largest and longest applause (twice). The service was broadcast live on a Jamaican TV channel.

The Bishop of Jamaica, Alfred Reid, wrote in the order of service: "I believe the gift of music is one of God's most precious gifts to the Caribbean so there will be no music used that does not originate here in the West Indian Church."

The lineup was impressive: a massed choir of 100 voices, a women's choir, a steel band of over 20 players and some excellent soloists. The music was outstanding. During the peace, the choir sang "One Love" by Bob Marley (which the BBC declared as the Song of the 20th Century). The Caribbean Lord's Prayer and Alleluia featured strongly. Some hymns were well known, some were from the Roman Catholic Church, and others were less well known. There was one eminently forgettable hymn commissioned for the occasion. Its lyrics were theologically twee, politically correct, poetically thin (try saying them) and the music was lifted from Beethoven's Ode to Joy. Judge for yourself:

May the Holy Spirit now
show us the way preferred
May we follow the commands
of your authentic word.
If ever there was horizontal hymn-singing this was it, far from the great traditional hymns of the Church, none of which was sung.

Archbishop Williams' sermon, delivered with energy and passion, was drawn from Acts 4:23-37; 1 John 3:1-8 and St John 10:1-16. He focused on the statement that "there was not a needy person among them". He nicely focused on the charge to the church to address human needs, which encompass needs far beyond "bread alone". But finally all those needs were to be met as "The Holy Spirit comes in as our actions are caught up in the action of God in Jesus Christ. To give ourselves means letting go of what makes us feel safe".

Again there was a focus on the horizontal element of the challenge to us which seemed to fail to draw on the excellent material in John 10 on the role of the shepherd who is also the gate through whom the sheep go in and out and find pasture and life. This theme was suggested in a well known Caribbean hymn in the service: "I for Jesus, you for Jesus, all for Jesus/ fall for Jesus, come to Jesus/ Jesus come for one, he come for all" and in a haunting song "Jesus set me for all eternity/ when his wounded hands touched me".

An African participant remarked that had a member of their church been preaching, there would have been an emphasis on the challenge to commit our lives to Christ followed by an altar call. After all, 10,000 people had come to hear the preacher, whose sermon was live on television also.

The service "set" was magnificent and specially lit - a large cross framed by stained glass windows fronted by two classical columns and a profusion of wonderful flowers. It is only to be hoped that some of it can be brought to the conference meeting room in the hotel which completely lacks any imagination, being just a dais against a grey backdrop of partition walls under reduced lighting. Grey about sums it up for Saturday evening's opening meeting - a series of greetings, introductions and information. No wonder the Presiding Bishop of the United States concentrated on her embroidery. The highlight was however a fascinating video of the life of the Diocese of Jamaica.

Sunday's only other event was titled "Mission Across the Anglican Communion" and featured the various Anglican Communion Networks. Delegates were asked to visit each display and learn about the different mission engagements of the Anglican Communion. The delegates will have a chance to learn more about some of the mission initiatives on Monday and Tuesday afternoon. That is when most of the Networks will host dedicated 80-minute group sessions designed to help the delegates "engage more fully with the activities of particular Networks and help to identify future strategies and developments," according to an Anglican Communion Office publication.

Only half of the 19 Networks on display will be hosting 80-minute sessions Monday and Tuesday. The following is a list of the Network group sessions that ACC delegates can choose from. Each delegate was asked to choose one Network from each time slot.

Your reporter notes that the mission statement of the International Anglican Women's Network includes, "We are inclusive of age, race, culture, language, education, economic status, and sexual orientation." You may also want to view the "Pre-IAWN Report" posted on their official website sponsored by the Anglican Communion.

The mission statement of the Anglican Peace & Justice Network includes the following aims:

- To lift up and champion the role of women, young people, indigenous communities and other marginalized groups to have full voice and representation in the official councils of the Church as a matter of justice

Your reporter notes that the Anglican Peace & Justice Network is currently convened by Dr. Jenny Te Paa of Aotearoa. Dr. Jenny Te Paa is also a member of the Chicago Consultation, a group of some 50 bishops, clergy and lay people whose goals include:

- To strengthen the movement toward the blessing of same sex relationships.
- To advance the inclusion of gay, lesbian, bisexual and transgender Christians in all orders of ministry.
- To strengthen the Anglican Communion's witness against racism, poverty, sexism, heterosexism, and other interlocking oppressions.

There is an interesting parallel between the goals of the Chicago Consultation and the Anglican Peace & Justice Network.

Colleges & Universities of the Anglican Communion

Anglican Refugee and Migrant Network
While there is no official ARMN website, a report to ACC 14 concerning ARMN is located here.

The Rev. Canon Dr. Chris Sugden of Anglican Mainstream and Mr. Robert Lundy of the American Anglican Council contributed to this report.
Posted by Unknown at 11:50 PM