How it all happened: Let's go to the videotape

Chris Sugden has the whole story - from here:

On Sunday, delegates are going to Anglican Churches throughout Jamaica to visit, and preach and enjoy Jamaican hospitality. They will welcome members of those churches to reflect with them on their experiences on Monday. Meanwhile over Saturday afternoon and evening people took time to reflect long and hard on Friday’s debate, and I was able to review the video-tape and transcript of the afternoon debate. 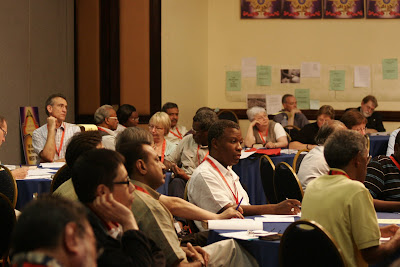 First of all, there was an attempt to add a fourth moratorium for a cessation of litigation, as proposed by the Primates at Dar-es-Salaam in February 2007 and as referred to in the Windsor Continuation Group Report. This was narrowly defeated. Not before the Presiding Bishop had suggested that Provinces all over the world had difficulties in securing alienated properties. Speakers from Sudan and the Middle East refuted two of her four examples. No African spoke in the debate on the WCG report. The only contentious vote was on this issue, and the vote to install a fourth moratorium was lost by one vote.

When it came to the covenant, Africans lined up to argue, along with others, that without section 4, which deals with issues of discipline, the covenant was meaningless. One of the reasons for removing section 4 put forward by Dr Ian Douglas, a clerical member for TEC, was that it provided for other churches, beyond the normal provincial members of ACC, to sign the covenant. This he indicated would have allowed other Churches in North America to sign – and then there would be a number of different church bodies all claiming to be authentic Anglicans because they had signed the covenant and thus create chaos.

And why is this wonderful state of affairs of people queuing up to be part of the Anglican Communion and embracing Anglican identity not to be fervently desired? Because if those whom TEC tends to refer to as “dissenters” could sign the covenant, they could legitimately claim to be Anglicans as defined by the Anglican Communion Covenant. This would give assurance of authentic Anglican identity to many people, currently in TEC, who are nervous of challenging TEC because they perceive TEC as the only legitimate source for Anglican identity for them. Were an alternative legitimate route available, many more Anglicans in the United States would take the path pioneered by those who are forming the Anglican Church in North America. This same Covenant suggests that those who cannot sign the covenant ( as TEC insists it should not have to) are in an outer circle rather than in the full counsels of Anglicanism. This would lead to further churches challenging TEC about ownership of property. Its about the property, stupid!

So far so good. But the picture is confounded when in the course of the debate, which was live blogged on Stand Firm and will be posted in video form on Anglican TV, www.anglicantv.org., the Archbishop of Canterbury and the Archbishop of Australia made some critically significant interventions.

First up was the Primate of Australia. The morning debate had begun with a consideration of a motion (Resolution A) to remove section 4 altogether. This was because one discernment group had indicated that it wanted to remove that section, so the Resolution Committee decided to test the mind of the house by putting that motion first – even though it was clear already in the discernment groups we are told that the majority were for sending the whole covenant forward.

Then it became clear that those who did not want there to be a covenant were coming up with amendment after amendment to make it acceptable to them. This turned out to be de facto filibustering as it meant that lunch was taken before the vote on the inclusion of section 4.

After lunch those back in time for the afternoon’s debate found the conference staff giving out a paper which added a third resolution to the two before the House. This Archbishop Aspinall explained, was an alternative 3rd resolution ( Resolution C) which was designed to take the best of two alternative resolutions before the house, A and B. Debate began on this new proposal. 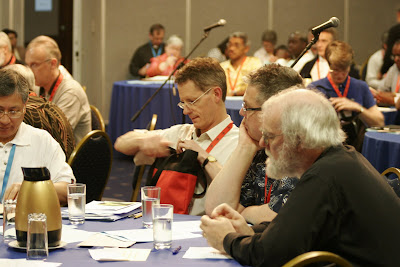 However, this paper was given out as an effective amendment to Resolution B, before the voting on Resolution A was taken. Appeals were made from the floor to proceed to vote on Resolution A but these were turned down by the chair. A point of order was raised: “ I do not see how we can engage a new resolution C which is really an amendment to B when we have not resolved A. I do not see how we can jump to C.” The chairman said: “It’s a question before the house and before we decide I think we need to hear some more voices.” But it had not been tabled or accepted by 10 people as an amendment to anything.

Janet Trisk from South Africa then said she understood this amendment ( which had not yet been put to have 10 people support it), and said: “if we go for C…we can debate each of the a to f points and make up our minds on each of these so that if you are somebody who supports section 4 as it stands then we can make a decision, if you are somebody who says we need more work on section 4 then you can also make a decision."

After further debate the chairman of the resolution committee admitted in answer to a question from the chair, that he had not had a chance to look at resolution C. 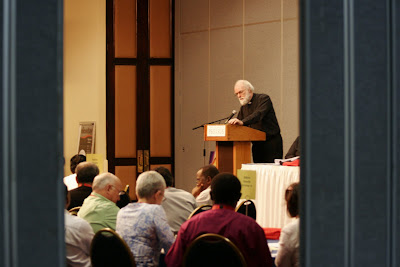 The Archbishop of Canterbury then intervened and said: "Procedurally the simple way of dealing with this is having seen C, what we have seen is effectively two possible amendments to B, additions to B, I think we should vote on A and then move to B and the extra material of C is moved as an amendment to B.”

Debate then proceeded on Resolution B. When the first two uncontentious clauses had been debated. Sarah Trisk from South Africa presented the amendments to the original motion B which were in effect a rerun of Resolution A, but this time delaying the whole covenant rather than just section 4. The chairman, Bishop Patterson from New Zealand, said: “The difficulty I have is that the house has already decided not to proceed along the lines of resolution A.” In other words he saw that the amendment ( still not yet accepted by 10 people but already spoken to by many) was a repetition of a proposal already defeated – namely to refer section 4 for further work, but now not detaching it from the rest of the Covenant. However at that point the Archbishop of Canterbury rose and said: “I don’t know if this is a point of order or information or what…It did seem to me that the voting of A may very well have been properly influenced by the fact that an alternative form of A was about to be tabled….that I suggested that the material of C should be moved as part of B…I suspect they voted on A with that in view.”

Only at this point were 10 people asked if they supported the amendment whose substance had been in effect allowed for discussion for some time.

Bishop Mouneer Anis again pointed out that this was bringing A back again. One further speaker was called in favour of the amendment now formally on the table and then the vote was taken.

The point is this – at the crucial point in the whole exercise, when the substantive issue was before the house, in the midst of the confusion the chairman did not draw to the house’s attention that the vote they were now to take on accepting the proposed amendment was the major issue of decision and call for speeches for and against the issue so that the matter was clear. Instead he proceeded straight to the vote. 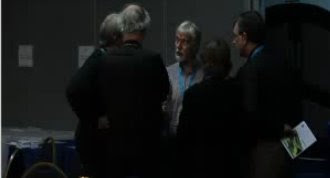 What struck many as strange is that the Archbishop of Canterbury, having urged the ACC publicly and privately that the Covenant was needed and needed now, becomes himself the architect of the means by which a very confusing procedure of introducing a third resolution in the middle of a debate on a first resolution, a resolution which becomes an amendment which brings back the substance of the first resolution in a new form after it is defeated, becomes the order of the day. And he becomes the architect of this by interpreting to the house its own mind on why it had voted the way it had on Resolution A. As Bishop Ikechi Nwosu said in a later press conference, if the Archbishop is able to do that, why go to all the expense of the ACC meeting and not just go and ask him at Lambeth Palace what he wants to happen. 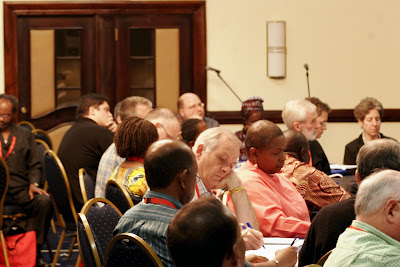 So was this a conspiracy or was it a cock-up? Whichever it was it is a case study of how to win if you are a minority in a meeting. If matters are going against you, get a team to work, introduce endless amendments to the resolution you do not like to spin out the debate, introduce a competing proposal, have a chair who is known to be on your side who has a vote and allows discussion of the proposal out of order, a person to present the material as a formal amendment, the president of the meeting to point out to people what is being intended, and also to interpret to the meeting its own decisions in a way that would allow this intention to come to fruition, and a chair who proceeds swiftly to a vote on this amendment having allowed extensive debate on the first resolution that was thought would be cleared out of the way quickly.

And what is the de facto result? Those facing litigation in the courts over property cannot appeal to an Anglican Communion Covenant which would give them the moral high ground in their cases by showing their continuity with historic Anglicanism; and General Convention can proceed with numerous resolutions which overturn the effective teaching of the Anglican Church with no opportunity for people to argue that this would be against the Covenant that ACC has accepted.

On the one hand is the property and keeping TEC, a major funder of the Anglican Communion Office and its projects, onside; on the other is affirming and embracing the historic faith as Anglicans have received and understood it. The ACC is split down the middle on the matter. Yet again an instrument of Communion has proved unable to deal with the crisis in the Communion.

As a place of and for orthodoxy, the AC is DEAD! En masse departure is called for. Let the heretics feed the heretics.