Internet caricatures in discarnate realities and other fun stuff ... 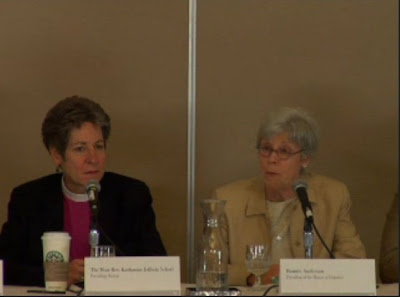 815 put up a video today that, despite slams about the free press, it's worth taking a break from our discarnate reality, pop some popcorn in the microwave and pull up a chair.

We do learn that Rowan Williams will be speaking to General Convention at the morning worship on the day after he speaks to the Global Economic Forum.

AP's Rachel Zoll sent in a question regarding the intent of many attending General Convention to overturn B039. The Presiding Bishop responded: 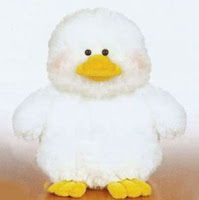 My hope is that we not attempt to repeal past legislation at General Convention. It's a bad practice, a bad legislative practice. I would far more prefer us to say where we are today in 2009, to make a positive statement about our desire to include all people fully in this church and that we be clear about who we are as the Episcopal Church.

The video is here.

Update from The Living Church: 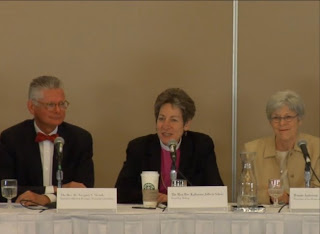 This year’s General Convention will be a “magic kingdom” to rival the nearby Disneyland amusement park, according to the three senior officers in charge of convention planning and the bishop of the host diocese. The four spoke at a press conference broadcast over the internet on May 13.

A number of viewers wanted to know how results from the recently concluded meeting of the Anglican Consultative Council might affect convention. Bishop Jefferts Schori said the need to debate the proposed Anglican Covenant obviously was a moot point since it failed to pass during the ACC meeting in Jamaica last week.

In response to a question regarding the repeal of B033, the resolution approved at General Convention in 2006 that recommends caution in consecrating bishops whose manner of life might cause distress to other members of the Anglican Communion, Bishop Jefferts Schori said B033 would be debated, but that she opposes its repeal.

“I would far more prefer that we say here is where we are today,” she said, adding that it was a more positive way to express the mind of the church.

Bishop Jefferts Schori, Bishop Bruno and Mrs. Anderson all expressed hope that the church would emerge from convention as a people empowered and excited about mission.

“In the past we tried to do that through programs,” Mrs. Anderson said. “I’m not sure it is in our DNA yet.”

I always appreciate when a TEC functionary makes a conclusive, unsupported, and unexplained assertion as if it were patently clear reality: "It's a bad practice, a bad legislative practice."

LOL. Too bad she doen't want to go on record as to why it would be bad for her...

Of course she does not want to repeal B033. She wants to come out of convention with Title III tightened up to virtually require TEC bishops to vote in favor of a gay nominee, she wants authorization for bishops to authorize gay marriage church wide with a "not included in the prayer book so its not authorized" official ceremony. Then she will point to the BCP and B033 and claim that TEC is in full compliance with the moratoria. But, of course, also claim that any church in communion with ACNA is border crossing and must be disciplined by the pastoral forum that the ABC will set up as soon as he can coordinate the schedules of the primates he will invite- +US, +Canada, and +Wales, and to make sure there is some balance from south of the Equator, he will add +Brazil and +N Zealand.