"Peace, peace, when there is no peace" 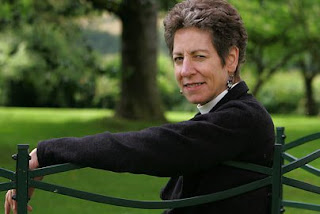 Ironically, the Presiding Bishop Katharine Jefferts Schori offered a resolution yesterday that was passed unanimously by the ACC during a plenary called, interesting enough, Peacemaking Dialogues.

What does it call other people to do? Schori's resolution "urges Anglicans everywhere to be bold in preaching reconciliation and facilitating peace-making dialogues in every situation of war and conflict."

It goes on to support "the concept of healing through the processes of truth-telling, repentance, and restorative justice."

Her resolution then "urges all in provincial leadership positions, especially those in theological education, to implement programs of conflict-resolution skills training as a contribution to developing effective and bold prophetic voices for God's justice in all societies."

So on one hand she's calling "Anglicans everywhere to be bold" not only in "preaching reconciliation," but also in "facilitating peace-making dialogues." But it's not just for the classical battlefields, but in every situation where there is "conflict."

However, when it comes to her own pasture, her own issues, her own situations, her own "conflicts" - well, buzz off, as we're learning in of the Episcopal Church's opposition to the "Fourth Moratorium" from the Primates at Dar es Salaam who wrote, “One of the aggravating factors in these circumstances has been the fact that a fourth moratorium requested by the unanimous voice of the Primates at Dar es Salaam in 2007 - to see the end of litigation - has also been ignored.”

Now what's bold about that?

UPDATE: You can now read the resolution here at the bottom of the page.
Posted by Unknown at 11:21 AM

Anglican with his collar on backwards said...

TEC has unearthed that famed third tablet carried down the mountain by Mel Brooks in "History of the World, Part 1." The 11th-15th Commandments are:

That's a flattering photograph of the PBess.

Here in Pittsburgh, the former rector of St Mark's Johnstown (he is a realigner and the parish voted against realignment and join the new TEC diocese)has been given one month to vacate the rectory without explanantion. Originally he was told he could rent the rectory at market price for as long as he needed. So much for "moving forward with grace"

Look at the picture of KJS.
Who looks like that? Who sits for photos portraying herself like she does? This person is demented and delusional.

I am appalled to hear that the Episcopal Church has been attempting to evict Episcopalian clergy from Episcopalian property. But why would such a thing happen. It is utterly unbelievable to think that a priest could possibly attend to his mission if his own employer were forcing him out of his quarters. One never hears of such things in other Churches. Usually things like this only occur when a priest is defrocked or has left the church. Is it possible that there is more to this than reported here?

The so-called Fourth Moratorium of the Dar communique was, if elderly memory serves, not so much a moratorium or a mandate as it was a plea that the Church in the United States refrain from litigation over property and that those leaving the church not attempt to seize property or interfere with continued worship by those who do not depart. It is an eminently reasonable request from the primates. The failure of this request to eliminate litigation (a wasteful, dissipating activity that does no one but lawyers any good), can be traced to the fact that many departing congregations (and later, as techniques were honed farther west, dioceses) continued to try to alienate (the term used in the communique) property and to change it over to the departing factions. When that occurs, forget asking the groups from whom the property is being taken to stay their hand. The secular courts require that rights be asserted within a specified time. You don't get a pass by saying that there was a communique from a gathering in Africa that asked you not to protect your rights and those of your parishioners. Particularly when the same communique asked those leaving the church not to try to take stuff with them on their way out.