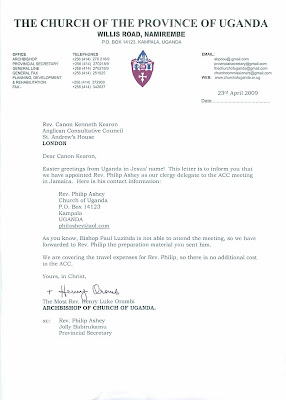 The Archbishop of Uganda, a member of the Joint Standing Committee the Primates, issues a formal protest to the Archbishop of Canterbury over refusal to seat the provincial delegate for the Province of Uganda: 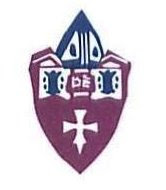 The Most Reverend Rowan Williams
Archbishop of Canterbury and
Chair of the Primates Standing Committee
Lambeth Palace
London, England

I have received a letter from Reverend Canon Kenneth Kearon, dated 30th April, refusing to seat the Church of Uganda’s clergy delegate to the ACC, Rev. Philip Ashey. I assume you have seen a copy of his letter, and that you may have been part of the discussion of this matter in the meetings of the Joint Standing Committee.

Canon Kearon’s letter states that the Joint Standing Committee has determined that Rev. Philip Ashey is not ‘qualified’ under Section 4(e) of the ACC’s Constitution because we received him into the Church of Uganda in 2005 as part of our pastoral care to Anglican clergy and congregations in America who were being persecuted for upholding Lambeth 1.10 in the context of a Province that willfully violated and continues to violate it.

Church of Uganda, and to accord to him every courtesy expected of any delegate from any Province of the Anglican Communion. This is a matter of urgency, and I look forward to hearing from you at your earliest opportunity.

If the Church of Uganda’s appointment of Rev. Philip Ashey is considered by you to be unacceptable, then we will be forced to take the steps necessary to bring this unbiblical, unjust and unconstitutional precedent to the attention of the rest of the Communion.

The Most Rev. Henry Luke Orombi
ARCHBISHOP OF THE CHURCH OF UGANDA.

Greetings in the name of our Lord Jesus Christ!

Please receive the attached letter from me informing you of a clergy delegate we have appointed to attend the ACC meeting in Jamaica.

I'm grateful for the nomination of Rev. Philip Ashley as ACC delegate. I note he will make his own arrangements to get there, and I look forward to welcoming him to ACC.

Kenneth Kearon write to the Archbishop of Uganda and denies his delegate a seat:

I acknowledge your letter of 23 April 2009 nominating Revd Philip Ashey as a clerical representative to the ACC for the Church of the Province of Uganda, and I have referred it to the Joint Standing Committee.

That Committee has noted

(i) that Mr Ashey has already been given Press Accreditation status to the ACC on
behalf of the American Anglican Council;

(ii) he has given his address as Henderson Mill Road, Atlanta, Georgia, USA.

The JSC seeks urgent clarification on these issues in order to consider the matter
further.

Read more here at SF as well (they have posted the letters here).
Posted by Unknown at 1:36 PM