Handwritten poem by a sixteen year old Bob Dylan (NOT!) up for auction 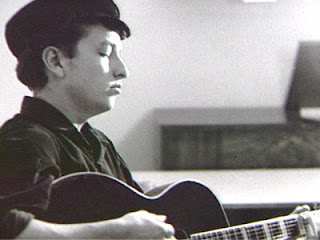 UPDATE: Did he really write the poem? Looks like the joke's fifty years in the making. Dreamtime has more info here.

A two-page poem written by “Bobby Zimmerman,” or Bob Dylan as the Rock & Roll Hall of Fame calls him, has been unearthed and is now up for auction at Christie’s. Handwritten by a teenage Dylan in the mid-1950s, “Little Buddy” was penned for The Herzl Herald, the official newspaper of Northwestern Wisconsin’s Herzl Camp, where young Zimmerman was a camper.

It’s startling that even as a young teenager, Dylan could write such effective prose, as Zimmerman’s blue pen tells a sad tale about a beloved family dog that gets beat to death for being too friendly with a drunken stranger. Dylan’s protagonist waits for the doctor arrive to save his ailing dog, but unfortunately he comes too late. It’s all very depressing, but it’s funny to note that even young Dylan wasn’t immune to the dreaded grammatical pitfall of “your” versus “you’re,” writing “Your too late sir my doggy’s dead.” (Maybe it was an artistic choice?)

The handwritten poem is currently on the block until June 23rd, with an estimated price in the $10,000-$15,000 range. You could place a bid on the poem now, or read the entirety of “Little Buddy” here:

Kneeling close to the side
Of his pal and only pride
A little lad, these words he told me

But when I returned
He had his little pal upon his knee
And the teardrops, they were blinding his big blue eyes

Believed to have been written in 1957 when he was 16, before the singer-songwriter moved to New York and won fame as a folk singer and rock legend, the poem is written in blue ink on both sides of a single sheet of paper, Christie's said.

Born Robert Allen Zimmerman, Dylan grew up in Minnesota. He wrote the poem while away at Herzl Camp, a Jewish summer camp in Wisconsin, and it is the artist's earliest known poem to come to auction, Christie's said. It could fetch $10-15,000.

Titled "Little Buddy," the poem is about the murder of a boy's dog. It reads in part, "But I'll meet my precious buddy up in the sky/ By a tiny narrow grave/ Where the willows sadly wave."

It was written for the camp newspaper and preserved by the editor for more than 50 years. The editor recently donated it back to the camp, which will benefit from the proceeds.

UPDATE: Here you go, the original that Dylan apparently lifted fifty years ago at summer camp. Christie's is still auctioning it off, though perhaps it might do better on eBay:

BB, So are you poised to open the bidding?