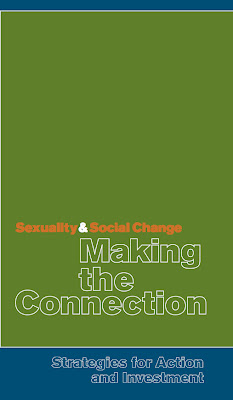 According to reports coming out of the ACC meetings in Jamaica, "The 14th Anglican Consultative Council today welcomed the proposal for a 'Continuing Indaba Project,' the next stage of the so-called Listening Process on the issue of human sexuality in the Anglican Communion."

The "Continuing Indaba Project" is extended to 2011 and is to be funded by the Satcher Health Leadership Institute at the Morehouse School of Medicine.

The Satcher Health Leadership Instituter's funding programs, it has been learned, includes financing directly from the secular Ford Foundation, author of the progressive initiative, Sexuality and Social Change: Making the Connection.

Sexuality and Social Change: Making the Connection focuses on

However, it bases it's advocacy by asserting that:

Conservative and fundamentalist forces use sexuality to attack progressive sectors that work on reproductive health, women’s rights, girls’ education and other issues. Often using religion to justify their actions, these groups see sexuality and sexual rights—particularly women’s control of their own sexuality and LGBT rights—as a tremendous threat to the status quo that they want to maintain (or a former order they are seeking to restore). Indeed, more open and positive attitudes toward sexuality would reduce the ability of vocal fundamentalists to sustain these attacks. If the terrain of sexuality is left uncontested, extremist forces will increasingly occupy the space as a base for their onslaught against human rights, religious pluralism, tolerance and social justice.

It seeks to oppose what it characterizes as "conservative and fundamentalist forces" by:

"building the capacity of those working on sexuality by building skills and the transfer of skills across national and regional boundaries" as well as "supporting advocacy that promotes informed public debate, educates policymakers and builds political will for changes in laws, policies, and actions of governmental and nongovernmental institutions."

In addition, it seeks to

And the aim of these "religious leaders" are trained to be

"effective educators and advocates, clergy and religious leaders," who "need information and training about sexuality and its interface with religion. Among the activities that would further this goal would be encouraging seminaries to incorporate sexuality into their curricula; offering ongoing education for clergy and religious educators (for example, at denominational conferences); and providing media training."

Engaging religious leaders in advocacy. Greater opportunities can be extended to mainstream and progressive religious leaders to become engaged in advocacy efforts around sexual health and rights, such as campaigns for comprehensive sexuality education, abortion rights and the rights of sexual minorities.

And they will do this by:

Reaching youth through religious institutions and events. Across cultures, young people participate in religious education or church-sponsored activities in great numbers. A stepped up commitment of creativity and resources to conveying a human rights perspective on sexuality to youth through progressive faith-based avenues would be a crucial step in the direction of social change.

Promoting outreach, dialogue and networking. There is an enormous need for both internal and inter-faith dialogues on the intersection of sexuality and religion, with special attention to sexual health and sexual rights. One indispensable activity is networking among different faiths to identify areas of concern, search for common ground and increase public attention to progressive views from different faith traditions on sexuality and religion. An important element of this work is outreach to diverse groups of people of faith.

Encouraging research on sexuality and religion. As mentioned in the discussion of research priorities, research is needed on the relationship between religion and sexuality. Topics include an examination of religious texts and doctrines with regard to sexuality and gender, and an exploration of the impact of religion over time on sexuality-related behaviors, practices, customs and laws.

This isn't Indaba - this is indoctrination. Read the entire report here - please. As Princess Leia once said, "It's a trick."
Posted by Unknown at 10:46 AM

Get the word out there folks!

It is a way to side-step the majority opinion...and force the sick sexual agenda down people's throats...(ugly thought)

I hope the orthodox primates will be strong enough to 'just say NO' and refuse to play reindeer games with these creeps.

Awesome job - an impressive piece of detective work you have done exposing the indaba indoctrination plan and agenda group funding it...and thanks for your reports on the ACC meeting below.

Mary--Did you check out the Satcher Health Leadership Institute's Board of Advisors? See here:

Given this advisory membership makeup, the notion that the SHLI can be a neutral arbiter of the continuing "listening" process is a farce.

To insinuate that the funding for a particular program will fundamentally skew the data of the same is to make a huge - and by no means warranted - assumption. Unless one can actually show that funding by the Morehouse School of Medicine and/or the Ford Foundation is positively correlated - and strongly so - with studies that back up their particular political agenda, then one has no ground upon which to make the case that has been made here on this blog (and even then, correlation is not the same as causation, and strong correlations do not necessarily indicate causal relationships between variables).

What this blog post reveals is not a critically informed investigative reporting, but a suspicion that plays fast and loose with easily correlated data, and prefers the sensationalism of suspicion over - and, perhaps, against - a deeper, more thoughtful, and more charitable editorial gloss on what is clearly an interesting piece of information - namely, that the ACC's next set of indaba discussions are being funded by a politically "progressive" (a term which I hate, not least because of its Whiggery...) group. Again, this fact is indeed interesting. However, that is all it is: interesting. It cannot be taken as indicating a pre-determined outcome.

The only indoctrination present here is the titillating revelation of such "secret" information on this blog, which is dressed up in the language of orthodoxy and, in Canon Samuel's comment, post-colonial resistance.

"Suspicion will steal the purity from your soul."
- St. John of the Cross, Sayings of Light and Love

Gracious me. Are you saying that an outside group with specific agenda is attempting to influence the Anglican Communion? I'm shocked, shocked I tell you. Good thing the IRD and its contributors have never done such a thing.

You want impressive detective work, read Jim Naughton's piece that followed the money of the IRD and look in the mirror. Tell us what you see.