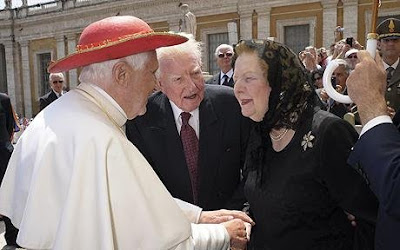 Ah for the days of Ronald Reagan, Pope John Paul II, and Margaret Thatcher - the President, the Pope and the Prime Minister - and the fall of the Iron Curtain. 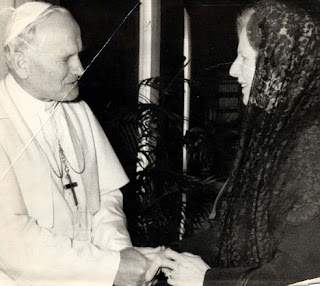 Of the "Great Triumvirat," only one is left - Baroness Thatcher. Yesterday she emerged from her retirement to meet with John Paul II's successor, Pope Benedict.

“I think there is more chance of Pope Benedict becoming a Methodist than Baroness Thatcher converting to Rome,” said Carla Powell, who organized the meeting. Margaret Thatcher remains a devout Methodist.

Cranmer reports that “the Baroness wore the customary black, just as she did when, as Leader of the Opposition, she met Pope Paul VI in 1977 and, later as Prime Minister, with Pope John Paul II in 1980. In the latter, she found an anti-Communist soul-mate who also sought political and economic liberation for Eastern Europe. With Ronald Reagan, they constituted the Western triumvirate responsible for the reunification of Europe and the era of glasnost and perestroika. And so the Baroness paid homage, laying a wreath of white roses on the tomb of John Paul II with a card which said: ‘To a man of faith and courage’.” 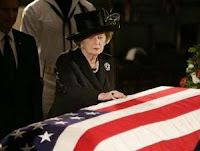 The last time we remember her coming out of retirement like this was five years ago for Ronald Reagan's funeral when she taped a special message of remembrance at his State Funeral at the Washington Cathedral in 2004.
Posted by Unknown at 12:37 AM