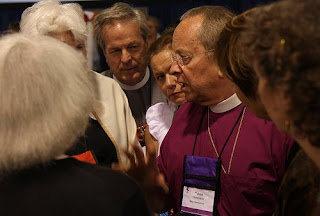 ANAHEIM, Calif. | U.S. Episcopal Church bishops authorized the church to draft a proposed blessing for same-sex couples Wednesday here at the Episcopal General Convention, although the measure still needs approval of the priest and lay delegates.

On Tuesday, the church decided to permit gay bishops, which passed 99-45 among the bishops and by a 72 percent to 28 percent margin among the church's deputies.

When the gay-blessings resolution was brought to the House of Bishops for consideration Tuesday, only supporters of the bill rose to speak. Gay blessings were raised during the 2003 General Convention, Bishop John B. Chane of Washington said, and then "the time was not right" to proceed.

However, "now is the time to proceed with these rites," Bishop Chane said.

Earlier in the day, there had been signs of a pushback developing against the blessings. Bishop Dean Wolfe of Kansas cautioned the House against offering aggressive amendments.

"Sometimes it takes very little" to "move us from agreement to division," he observed. He asked the bishops to practice a "generous orthodoxy" to the denomination's conservatives, who oppose same-sex blessings.

After 25 minutes of debate, with only one conservative rising to speak in opposition, Bishop Clifton Daniel of East Carolina told the House he was uneasy. The "silence is ominous," he observed, adding "I need your voice to inform my conversation."

Bishop Peter Beckwith of Springfield, Ill., answered the challenge, saying: "Why waste time? Why waste my time. Why waste your time?" with these debates.

In a closed session, an ad hoc committee of bishops was asked to study the resolution to find ways to keep the Episcopal Church within the bounds of the Anglican Communion while also providing a go-ahead for same-sex blessings.

"I'm not interested in tweaking this," he said. "It's not the train that's the problem, it's the direction it's going."

Fears of a schism within the U.S. church prompted the deal, Bishop William Love of Albany, N.Y., told The Times. He also declined to say whether conservatives would walk out.

Bishop Marc Andrus of California said his diocese "will keep its focus on pastoral care and marriage equality."

Wow! this is the very end!!! If the church is going to bless couples where will we end up next. Blessing warships and Trident missiles I suppose. What is the world coming to?