House of Deputies debate opposition to the Defense of Marriage Act

The debate is underway to authorize The Episcopal Church's official opposition to the Defense of Marriage Act of the United States.

Resolved, the House of _______ concurring, That this 76th General Convention reject the belief that the existence of marriage, civil union, or domestic partnership between same-sex individuals has a detrimental effect on opposite-sex marriage; and be it further 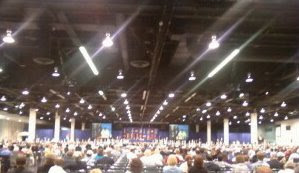 One deputy just said the church should promote freedom of conscience and not tell all Episcopalians to oppose the Defense of Marriage Act. Those who are in favor of this resolution are continuing to say this is an issue of civil rights. Rowan Williams last summer said that this issue is not about civil rights.

Another deputy reminded the House that in the Righter Trial sexuality was doctrinal but not a matter of doctrine.

The previous question has been called.

They are now voting - first all the laity and then all the clergy.

There has been a request to reconsider

All Episcopalians are now called to speak out against the Defense of Marriage, which has the Episciopal Church official telling those who are politically or socially conservative or even Republican Episcopalians to act against the conscience.

The call to reconsider is on hold until the vote is confirmed.

The reconsider motion has now been withdrawn.

Lord have mercy on their souls !I am confident that I know how the deputies for the Diocese of SC will vote. But really now ?? TEC is now OPPOSED to defending marriage?? They want us to work to overturn the law of some states including SC. I think someone needs to put together a civil action suit against TEC for forcing us to repeal state laws.

I gather they must no longer believe "the bond and convenant of marriage was established by God in Creation." I gather TEC does not even believe what is in their own BCP. How very sad!! I don't know how much more I can take.

TEC is no longer a church. They need to stop kidding themselves and become a PAC. Give it up TEC ! As a church you are dying.

The comments you make on state laws regarding marriage could just as well have been said on the church working to overturn laws against slavery. The bible was used to try and stop abolition.
When will people stop trying to read the mind of God and instead look into their own hearts. If you cannot find enough love for your fellow humans regardless of their sexuality then somehow you seem to have missed the whole point of
the Gospels.