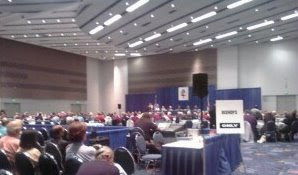 We've been handed a copy of a minority statement, entitled "Anaheim Statement, General Convention 2009" that comes from a number of orthodox Episcopal bishops. The signers have not yet been made public, though it has been confirmed that it was read in the House of Bishops today.

At this convention, the House of Bishops has heard repeated calls for honesty and clarity. As the conversation has proceeded within the HOB, repeated attempts to modify wording which would have been preferable to the minority in the vote were respectfully heard and discussed, but in the end most of these amendments were found unacceptable to the majority in the House. Many in the majority believed the amendments would make the stated position of this House less honest about where they believe we are as The Episcopal Church.

It is apparent that a substantial majority of this Convention believes that The Episcopal Church should move forward on matters of human sexuality. We recognize this reality and understand the clarity with which the majority has expressed itself. We are grateful for those who have reached out to the minority, affirming our place in the Church.

ADDED: We seek to provide the same honesty and clarity. We invite all bishops who share the following commitments to join us in this statement as we seek to find a place in the Church we continue to serve.

David Virtue has put up a slightly different version of the statement here (it's apparently missing the last sentence of the first paragraph) and is printed in a different order than the original we received, but he also reports that this statement was read to the House of Bishops by Bishop Gary Lillibridge of West Texas. In addition, he also reports that "At this time 16 bishops have signed the minority report." (UPDATE: Up to 26 bishops may have now signed the Anaheim Statement.)

It appears that this is a group aligned with the "Communion Partners," a group of bishops and rectors who support the Windsor Report, the Dar es Salaam Communique, and the Anglican Covenant, and have chosen prior to this General Convention to work within the Episcopal Church structures and consider themselves directly in communion with the Archbishop of Canterbury. They also released an influential legal opinion on how the current Presiding Bishops has overstepped her authority - that report may be read here.
Posted by Unknown at 7:18 PM

Are they reaffirming any commitment to the Episcopal Church?

It does not look so. Time will tell.

The committment is to the "Church of God". Many will reflect on the role of TEC in His Church.

Its very clear that the house of bishop.

Milton,
You have asked the appropriate question. I believe they have stated with this communique that they are committed to the Anglican Communion. What they have left unsaid is any commitment to TEC. I stated on S.F. that they have already mentally left TEC.

I had the same question about the Bishops' commitment to the Episcopal Church, but I think there is a clear indication of that in the sentence before the bullet points: "We invite all bishops who share the following commitments to join us in this statement as we seek to find a place in the Church we continue to serve." I think the Bishops have honestly and graciously indicated that they are committed to "finding a place" in the Episcopal Church, while maintaining their convictions. I applaud them for that and hope that they will continue to challenge the thinking of people like me. As a Provost of Coventry once said, "If everyone in the Church were just like me, what kind of a Church would that be?"

One that served God and not man???