A Sunday Afternoon in Newport Beach 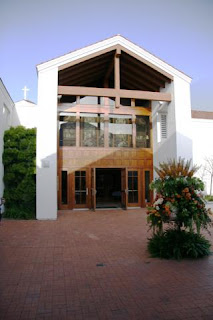 We're here in the kitchen of the rectory of St. James Newport recharging the cell phone and writing as the rector, Richard Crocker and his wife Caroline whip up a tray coffee and tea for guests who have dropped in from the East.

It's absolutely a lovely day here in Newport Beach and apparently every day is lovely in Newport Beach. We all went to the The Cannery for a late lunch and sat at what the staff there said was the "John Wayne Table." Yep, we're definitely in California.

It is great to be near the ocean and the warm life of the California southern coast. How it brings back memories of my early teen years in Southern California. I live in the East - why?

While we all were attending the final closing Eucharist of the Triennial of the Order of the Daughters of the King (with Bishop John Howe preaching a rousing sermon on being filled with the Holy Spirit!), the Rev. Dr. Richard Turnbull, principal of the Oxford theological college Wycliffe Hall was the Sunday morning preacher at St. James. 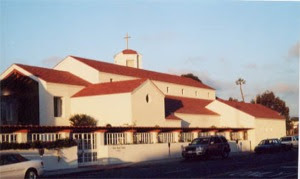 After we arrived from Anaheim earlier this afternoon, Richard gave us all a tour of St. James located in the heart of Newport Beach and it was very special to have the opportunity to see up close and personal this church that has been on the frontlines and headlines since the congregation here voted overwhelmingly to separate from The Episcopal Church in August 2004. One part of their litigation is now before the Supreme Court of the United States for their consideration for their docket of cases for review. It is a vibrant parish that is located about twenty minutes away from where the General Convention of the Episcopal Church will meet in Anaheim.

To learn more about St. James Newport Beach, click here. To learn more about their journey since voting to separate from The Episcopal Church click here. After five years of being under the pastoral care of the Archbishop of the Anglican Church in Uganda, Henry Orombi, the parish has recently joined the new Diocese of Western Anglicans in the Anglican Church in North America (ACNA).
Posted by Unknown at 8:05 PM

So, BB, how long are you in Anaheim? I arrive later today.
Steve

I am in Anaheim for all of General Convention. ;-) See you soon!

BB,
I truly wish you all God's blessings with your new denomination. It must all be very exciting. So, why exactly are you going to GC? Shake off the dust and turn your face to your future. Why not just wish the same to the Episcopal Church and let them go.

That's weird. I looked at the pic of St. James and thought "Huh. That looks like a modern version of Truro." Must be 'cause Richard's there. :)

Look forward to your reporting. You are in our prayers.

I was at St. James' last summer, just before they announced Richard as the new rector. It is a lovely place. BB, if you get back to Newport Beach after (during) Convention, you should try Ruby's Diner on the pier, too. Best huevos rancheros ever! And the Balboa bars are great.