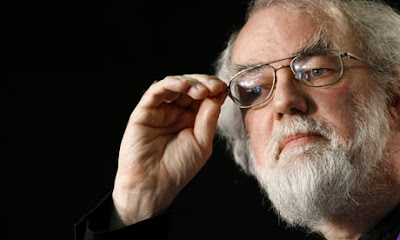 Episcopal bishops approved a resolution passed earlier this week by the laity and clergy that allows “partnered gays” full access to ordination.

The Archbishop of Canterbury expressed “regret” over a decision by Anglicans in the US that represents a blow to his hopes for Church unity.

They took the step towards schism in spite of a plea by Dr Rowan Williams, who addressed the General Convention in Anaheim, California, last week.

Clarity even in the face of obfuscation.

We have had gays and lesbians serving in the episcopate for years! This is just about letting them finally be open about themselves. Shouldn't we follow what our signs say: "The Episcopal Church Welcomes You"? If someone is truly called by God to serve, why should it matter what their love life is like? We should trust in God.

"why should it matter what their love life is like?" Umm, do you want to follow that thought to its logical conclusion? Probably not. It matters what all parts of our life are like, because we are members of one Body.

I guess we can all be thankful that GC 2009 has provided clarity about the direction of TEC. There is finally no ambiguity and therefore no reason to restrain decisions on the part of parishes, dioceses and provinces in response to GC 2009.

Schism has been a fact for several years. It has played out in some highly publicized battles over property, but the much quieter evidence is the ever growing exodus of individuals from TEC.

I would suspect that the Denis Canon has been the major restraint against leaving for many years. It has acted as TEC's Berlin Wall, keeping parishioners in the pews. Were it to dissappear, I'd wager that at least half the congregations in the US would be gone within months.

However, it is a fact that outside of VA, the courts have not wanted to rule on the merits of property ownership. I don't expect to see significantly more individual churches leaving. Dioceses are another matter, but there are not many conservative dioceses left anyway. "Individuals are free to leave..." and they will.

We are indeed One Body in Christ. We also say in our Baptismal Covenant that we will respect the dignity of every human being.

I trust that God would not call someone who would be a detriment to his Church. Gene Robinson has been a "breath of fresh air" and everyone who has met him says that he is a wonderful man and bishop.

All I am saying is that any person who discerns that serving God is his (or her) calling should be allowed the chance to do so.