Circuses, Funerals, and a General Convention 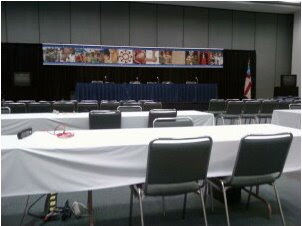 I am staying a far parcel outside of town, though it turns out that most the daily trip is apparently against the rush hour traffic. The day then begins with a roar as we are out on the interstates that weave through what is known as Los Angeles, California. I was warned as I started out by my sister-in-law this morning that not only did we have thousands heading out to attend the massive memorial concert at the Staples Center for the late King of Pop, but the Circus is also in town and the animals are being paraded through somewhere in the city limits. All I could imagine are the elephants getting lose and stampeding for Staples as thousands of mourners line up with the eBay-auctioned tickets in hand, while the city fills up with hundreds of Episcopalians looking for Disneyland. 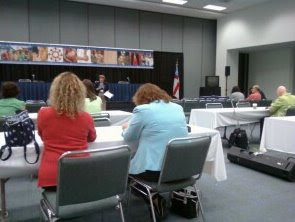 Since I am up at the crack of dawn to tackle the LA freeway system, I have arrived early today. We're told there will be the first press conference at 8:45 a.m. and we'll bring you a report of that conference. My first question has all ready been dodged a bit - "Where's Rowan?" One gets a sense all ready that his visit, and yes, he is the Archbishop of Canterbury, is being played-down quite a bit. It will be interesting to see if that topic is covered at the press conference. I do know he's speaking at the Economic Forum and doing a "Bible study" - but no sermon at the Sunday Eucharist, which is a complete break in tradition.

The good news - Jim Naughton and I agree at least on one thing. We're both excited that the new Harry Potter film is opening on the 15th. On that, we have agreement.

Thank you so much for keeping us posted on the doings (or not doings) in Anaheim.

I will keep you in my prayers today and for the next several days. I also am SO excited about HP movie on the 15th. I can hardly wait!!!

It is a good thing that we can agree about Harry Potter films. I'm looking forward to seeing it.