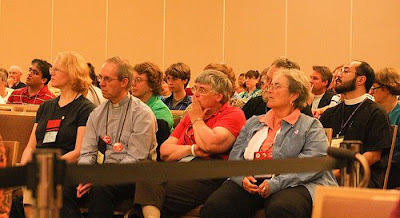 Resolved, the House of Deputies concurring, that the Standing Commission on Liturgy and Music, in consultation with the House of Bishops Theology Committee, collect and develop theological resources and liturgies of blessing for same-gender holy unions, to be presented to the 77th General Convention for formal consideration, and be it further

Resolved, that the Standing Commission on Liturgy and Music, in consultation with the House of Bishops Theology Committee, devise an open process for the conduct of its work in this matter, inviting participation from dioceses, congregations, and individuals who are or have already engaged in the study or design of such rites throughout the Anglican Communion, and be it further Resolved, that all bishops, noting particularly those in dioceses within civil jurisdictions where same-gender marriage, civil unions, or domestic partnerships are legal, may provide generous pastoral response to meet the needs of members of this Church; and be it further

Resolved, that honoring the theological diversity of this Church, no bishop or other member of the clergy shall be compelled to authorize or officiate at such liturgies, and be it further

Resolved, that the Anglican Consultative Council be invited to conversation regarding this resolution and the work that proceeds from it, together with other churches in the Anglican Communion engaged in similar processes.

As we learned in the prolife movement with the passage of partial birth abortion bills, the way to change the course of a social cause is piece by piece and this resolution is a prime example of how that's done. By opening up same sex unions and marriages in states where civil same sex unions and marriages are legal, in fact the barnyard door is wide open. No one is fooled. The lobbying groups here at General Convention are in favor of "full inclusion of the baptized" - not just in particular states. That the lobbying groups would favor this illustrates that either they are not truly in favor of full inclusion of the baptized or it's a trick. This resolution would in fact break apart the moratorium now in place with B033, just as D025 would. Either the church observes its moritorium on behalf of the request of the rest of the Anglican Communion or it will not.

The phrase "generous pastoral response" is a euphemism for blessing of same sex unions and marriages. As we also recall, when The Episcopal Church opened the door for the ordination of women, General Convention also promised that dioceses by matter of conscience and tradition who do not ordain women would not be forced to do so. But that view was not upheld and General Convention 2000 in Denver initiated "task forces" with the mandate to "visit, interview, assess, and assist" the traditionalist dioceses in an effort to pressure them into compliance with the rest of the Episcopal Church. Even as one who does support the ordination of women, this tactic - a trick - to force the Anglo Catholic traditionalists into "compliance" was quite simply appalling. The idea that some dioceses would practice "full inclusion" while others will be free to not practice "full inclusion" needs a generous amount of suspension of disbelief in order to comply.

This current resolution - which of course will have the same affect since it follows the same strategy - should be sent to the House of Bishops first where D025 is also slated for consideration. Stay tuned and stay on guard.
Posted by Unknown at 1:45 PM

BB: According to +Sauls, the ABC has been "misinformed" about DO25. Imagine that.