The Telegraph: Actions of The Episcopal Church bring schism to the Anglican Communion - Rowan Williams must act 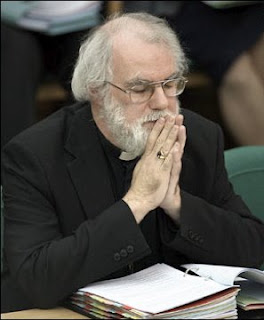 So the Anglican Communion has finally split. Having written countless times that the Church was “teetering on the brink of schism last night”, I can now say that the American Church has gone over the edge. No more hanging around, it’s jumped.

When I saw Rowan Williams on Saturday, he said that he was hopeful that they would continue to hold the line agreed by the Communion that practising homosexuals should not be consecrated as bishops. He had been out to the General Convention, which is being held in Anaheim, California, and had come back reasonably optimistic.

In deciding to ignore the pleas for this policy to be upheld, the Americans have clearly shaken him warmly by the hand before stabbing him in the front. They have delivered a fatal blow to his hopes for unity and now there can be no more fudging the issue.

The Archbishop must act, and act decisively, but he will be well aware that the Americans have essentially thrown down a challenge to him and the rest of the Communion.

“Are you with us or against us?” That’s their call to the Archbishop and liberals in the west, who sympathise with their campaign to secure equal rights for practising gays in the Anglican Church. They don’t believe that the African churches and evangelicals will ever change their stance on the issue and are fed up with being out of step with the culture around them.

They want other churches, including the Church of England, to come clean about the fact that they are just as liberal in their support of gays, but are just not as open about it.

The decision by the Americans to go their own way won’t just cut them off from the rest of the Anglican Communion, but could split the whole Church as it draws a line in the sand, demanding churches declare where they stand. It means Rowan Williams also must decide where he stands.

He has tried valiantly to put his personal beliefs to one side for the sake of unity. He has expressed sympathy with the traditional position held by those who believe that the Bible is clear that sex only belongs in marriage. He has asked for time in seeking to find a way forward out of this intractable problem.

Now the line has been drawn, he has no option but to act. The Anglican Communion will be looking to see how he responds.

Hmmm, somehow I suspect that ++Rowan will find a way not to take a decisive action.

I agree with Perpetua. He will find a way to not take decisive action, to try to keep the different parties from dialoging and communing, but events will be like a glacier melting rapidly beneath his feet.

I pray for the ABC that he would get his head around the gravitiy of this moment. He hold the fuse in one hand and the match in the other. Inaction or dribbling could well cause the shredding of the Communion.

I know there's the temptation for snarkiness at a time like this, but the unity of the Communion is on the line...

I hope that Dr. Williams will not take his marching orders from the press.

What would you have him do?

The honorable thing for Dr. Williams to do is to stand-down. This whole debacle has been a tremendous vote of non-confidence.Unfortunately I do not see him doing it. It might be time for Her Majesty to suggest that he return to Wales and take-up fly fishing.

Father Daniel: Agreed, the AbC owes no allegiance to neither focus groups, nor the press.

Sonny: I would hope that he (The AbC) would take this grave matter to prayer and fasting in order to hear from Heaven.