Bishop N.T. Wright: The Americans know this will end in schism 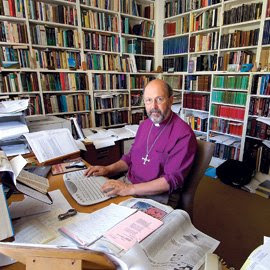 From Times of London:

In the slow-moving train crash of international Anglicanism, a decision taken in California has finally brought a large coach off the rails altogether. The House of Bishops of the Episcopal Church (TEC) in the United States has voted decisively to allow in principle the appointment, to all orders of ministry, of persons in active same-sex relationships. This marks a clear break with the rest of the Anglican Communion.

Both the bishops and deputies (lay and clergy) of TEC knew exactly what they were doing. They were telling the Archbishop of Canterbury and the other “instruments of communion” that they were ignoring their plea for a moratorium on consecrating practising homosexuals as bishops. They were rejecting the two things the Archbishop of Canterbury has named as the pathway to the future — the Windsor Report (2004) and the proposed Covenant (whose aim is to provide a modus operandi for the Anglican Communion). They were formalising the schism they initiated six years ago when they consecrated as bishop a divorced man in an active same-sex relationship, against the Primates’ unanimous statement that this would “tear the fabric of the Communion at its deepest level”. In Windsor’s language, they have chosen to “walk apart”.

Granted, the TEC resolution indicates a strong willingness to remain within the Anglican Communion. But saying “we want to stay in, but we insist on rewriting the rules” is cynical double-think. We should not be fooled.

Of course, matters didn’t begin with the consecration of Gene Robinson. The floodgates opened several years before, particularly in 1996 when a church court acquitted a bishop who had ordained active homosexuals. Many in TEC have long embraced a theology in which chastity, as universally understood by the wider Christian tradition, has been optional.

Schism 'inevitable' after US approves gay bishops
Bishops back Rowan Williams over gay sex row
US Church pledges not to consecrate gay bishops
No gay bishops? Then no bishops at all
That wider tradition always was counter-cultural as well as counter-intuitive. Our supposedly selfish genes crave a variety of sexual possibilities. But Jewish, Christian and Muslim teachers have always insisted that lifelong man-plus-woman marriage is the proper context for sexual intercourse. This is not (as is frequently suggested) an arbitrary rule, dualistic in overtone and killjoy in intention. It is a deep structural reflection of the belief in a creator God who has entered into covenant both with his creation and with his people (who carry forward his purposes for that creation).

Paganism ancient and modern has always found this ethic, and this belief, ridiculous and incredible. But the biblical witness is scarcely confined, as the shrill leader in yesterday’s Times suggests, to a few verses in St Paul. Jesus’s own stern denunciation of sexual immorality would certainly have carried, to his hearers, a clear implied rejection of all sexual behaviour outside heterosexual monogamy. This isn’t a matter of “private response to Scripture” but of the uniform teaching of the whole Bible, of Jesus himself, and of the entire Christian tradition.

The appeal to justice as a way of cutting the ethical knot in favour of including active homosexuals in Christian ministry simply begs the question. Nobody has a right to be ordained: it is always a gift of sheer and unmerited grace. The appeal also seriously misrepresents the notion of justice itself, not just in the Christian tradition of Augustine, Aquinas and others, but in the wider philosophical discussion from Aristotle to John Rawls. Justice never means “treating everybody the same way”, but “treating people appropriately”, which involves making distinctions between different people and situations. Justice has never meant “the right to give active expression to any and every sexual desire”.

Such a novel usage would also raise the further question of identity. It is a very recent innovation to consider sexual preferences as a marker of “identity” parallel to, say, being male or female, English or African, rich or poor. Within the “gay community” much postmodern reflection has turned away from “identity” as a modernist fiction. We simply “construct” ourselves from day to day.

We must insist, too, on the distinction between inclination and desire on the one hand and activity on the other — a distinction regularly obscured by references to “homosexual clergy” and so on. We all have all kinds of deep-rooted inclinations and desires. The question is, what shall we do with them? One of the great Prayer Book collects asks God that we may “love the thing which thou commandest, and desire that which thou dost promise”. That is always tough, for all of us. Much easier to ask God to command what we already love, and promise what we already desire. But much less like the challenge of the Gospel.

The question then presses: who, in the US, is now in communion with the great majority of the Anglican world? It would be too hasty to answer, the newly formed “province” of the “Anglican Church in North America”. One can sympathise with some of the motivations of these breakaway Episcopalians. But we should not forget the Episcopalian bishops, who, doggedly loyal to their own Church, and to the expressed mind of the wider Communion, voted against the current resolution. Nor should we forget the many parishes and worshippers who take the same stance. There are many American Episcopalians, inside and outside the present TEC, who are eager to sign the proposed Covenant. That aspiration must be honoured.

Contrary to some who have recently adopted the phrase, there is already a “fellowship of confessing Anglicans”. It is called the Anglican Communion. The Episcopal Church is now distancing itself from that fellowship. Ways must be found for all in America who want to be loyal to it, and to scripture, tradition and Jesus, to have that loyalty recognised and affirmed at the highest level.

N.T. Wright is Bishop of Durham, Church of England.
Posted by Unknown at 4:48 PM

BB,
Now I don't feel quite so bad about my personal library.

It should also be mentioned that EVERY religion except paganism says that sex is very dangerous to the spiritual life. In Buddhism (which many consider to be unconditional love and acceptance) forbids buddhist monks to "pleasure themselves".
We in the US believe that because we have material prosperity we also are experts on the spiritual????

Great thoughts as always from +Wight. However, there is something which he skips over, and which I have no doubt he fully comprehends. By +Cantuar recognizing ACNA, either de facto or de jure, all of those who have stuck with TEC to witness will have a path to follow. If that isn't respecting their efforts and faith, I don't know what is.

To leave TEC or stay in what seems to be a minority? I think I am leaving. I am a Christian first, an Anglican Christian second, and a a member of TEC last. To remain in a church organization that is moving toward man rather than God seems inconsistent with the path in John 14:6.

Loving the sinner is one thing, and does not require loving the sin, or treating the sin as a normal manifestation of the image in which we were created.

Bishop Wright makes much sense. We all are tempted to sin; we have desires we should not follow. When we do act, is it in accordance with our Christian Bible-based beliefs or our sinful nature? I have made a lot of mistakes in my life, almost always from making a poor choice as to what to do.

We have choices, and some are better than others.

I agree with Don. I am a Christian first, Anglican second who happens to worship in a TEC parish in SC.

In 1977, my parents left TEC. So I asked my mom if we were not Espicopalians anymore, what should I write in place of PECUSA in my 1928 prayer book. She replied Anglican Church in North America. Guess what, it is here !