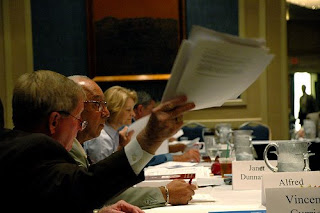 The bishops of the Episcopal Church voted at the church’s convention on Monday to open “any ordained ministry” to gay men and lesbians, a move that could effectively undermine a moratorium on ordaining gay bishops that the church passed at its last convention three years ago.

he resolution passed on Monday was written in a way that would allow dioceses to consider gay candidates to the episcopacy, but does not mandate that all dioceses do so.

The resolution, if approved, would probably add to the strife in the Anglican Communion, the world’s third largest family of Christian churches, of which the Episcopal Church is the American branch.

Conservative provinces in the Anglican Communion, especially some in Africa, have broken off their ties with the Episcopal Church in recent years after the church consecrated Bishop Gene Robinson, the first openly gay bishop in the communion, who was elected in the diocese of New Hampshire six years ago.

The moratorium that the Episcopal Church had passed at its convention three years ago was an attempt to calm conservatives in the communion and in the Episcopal Church. While not explicitly labeled a moratorium, it urged Episcopal dioceses to restrain from consecrating bishops whose “manner of life” posed a challenge to the rest of the Anglican Communion. In fact, a few openly gay candidates were considered for election in the last three years, but none of them won sufficient support, and the moratorium was never tested.

In the end the moratorium pleased no one: neither conservatives who observed that some in the church did not really intend to abide by it, nor liberals who saw it as a codification of discrimination and injustice to gay clergy members who otherwise were qualified to be considered as bishops.

The Rev. Susan Russell, a priest in Los Angeles who is the president of Integrity USA, an advocacy group for gay men and lesbians in the church, said in a statement late Monday, “There is no question that today’s vote in the House of Bishops was an historic move forward and a great day for all who support the full inclusion of all the baptized in the Body of Christ.”

The Episcopal News Service reported that Bishop Henry Parsley of Alabama, who voted against the resolution on Monday, said it would be interpreted overseas as a rejection of the moratorium, even though he thinks it is more nuanced.

“I long for us to be an inclusive church, but not a polarized church,” he said. “We need to be a part of the larger Anglican Communion in what we do in this matter. I think it will be interpreted internationally as a rejection of B033,” the legislation that instituted the moratorium on gay bishops three years ago.

The moratorium had done little to forestall the fracturing both within the Episcopal Church and in the Anglican Communion. Conservatives in both bodies have formed their own alliances in the last three years, asserting that they represent the true Anglican tradition.

In the United States, four dioceses — Fort Worth; Pittsburgh; Quincy, Ill.; and San Joaquin, Calif. — have voted to split from the Episcopal Church (although some parishes within those dioceses elected to remain). Last year, they joined with other disaffected parishes and groups that had splintered from the Episcopal Church over many years to form the “Anglican Church in North America.” That group held its first convention, in Texas, last month.

"Rev. Ralph Stanwise, from the diocese of Quincy, said, “If we overturn the B033 moratorium we will in effect be urging many remaining conservatives and moderates among us and in our home dioceses, especially our most fragile ones, to search for the exit signs."
Hopefully, some of those exiting will consider ACNA.

Dale, I guess the message was certainly clear: orthodox, here's the door.
Oscewicee

I suspect that the passage of D025 will be seen by some as one more reason to leave the Episcopal Church. I will miss those friends and others who leave, as I think we need to hear all sorts of voices in the process of discerning where God is leading us. However, as I said to someone in 2003, if one's convictions make it impossible to remain in a church which has a partnered gay bishop, then I respect the decision to leave. I had hoped that this would not be a communion-breaking issue and am sad that some have worked so hard to make it one, but I am ralistice enough to know that wishing it weren't so doesn't make it not so. I pray that those who leave will find a new home and blessings in ACNA or wherever else they may find a home.

BB,
I wonder if there is a prospect that the C of E might not recognize ACNA and, at the same time, break communion with TEC and the Anglican Church of Canada. Thus putting all North Americans to the curbside.

1662 BCP,
I do not believe the CofE would put all North Americans to the curbside at once. The CofE has the enviable position of playing a powerful role by who it would chose. Of course, as a member of ACNA, I would like them to chose us.

It makes no sense to throw it all out. What is clear here is that the leadership of TEC like to hang the Anglican Drapes in the window, but as for the Archbishop of Canterbury he can just hang elsewhere. There is a sense of adolescent belligerence throughout the halls here - and it is quite adolescent and quite belligerent. I don't think they honestly believe there will be any accountability for what they are doing, none at all. Are they right or are they wrong?

BB,
So do you think that since they've heard the "don't make me stop this car" outburst before, with no consequences that they really feel there never will be consequences. Unlike my Father, I've actually stopped the car before and turned around and gone home with the kids in complete silence. It really works, when needed and used responsibly.

The NY Times article mentions "the battle over homsexuality." Or, one might say the "battle against homosexuality." This is a battle that never be won. Homosexuality, like its complementary sexual orientation heterosexuality is A naturally occuring psycholological attribute or characteristic. Sexual orientation is just part of human nature, not sought or chosen, hitting everyone indiscriminately. Homosexuality is no more sinul than heterosexuality. To fight about homosexualiy is like fighting against air pressure, or gravity,or the tides. It's not something that can be prayed away, or repented of. It's just there and will continues to exist as a human trait as long as the human race exists.