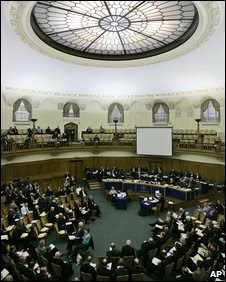 Kendall Harmon reports that the first motion for the Church of England to recognize the Anglican Church of North America has picked up six Church of England bishops and at 121 sponsors. According to the London Times, this will "guarantee it a place on the next Synod agenda in February

"That this Synod express the desire that the Church of England be in communion with the Anglican Church in North America."

This comes as the House of Deputies passes D025 that will officially recognize the ordination of non-celibate homosexuals and overturn the moritorium enacted at General Convention 2006. It reads in part:

Resolved, That the 76th General Convention recognize that gay and lesbian persons who are part of such relationships have responded to God's call and have exercised various ministries in and on behalf of God's One, Holy, Catholic and Apostolic Church and are currently doing so in our midst; and be it further

Resolved, That the 76th General Convention affirm that God has called and may call such individuals, to any ordained ministry in The Episcopal Church, which call is tested through our discernment processes acting in accordance with the Constitution and Canons of The Episcopal Church;

The London Times is reporting that "The Archbishop of Canterbury told General Synod today that he 'regrets' the decision by The Episcopal Church house of deputies to overturn the moratorium on the ordination of gay bishops," writes Ruth Gledhill of The Times.