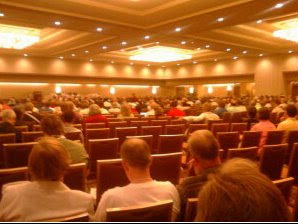 I'm here in the Prayer Book and Liturgy Committee debating C019, as well as other resolutions that are favoring the blessing and marriage of same gender couples. Susan Russell spoke passionately and effectively to C019 and Bishop Sauls just spoke to another resolution C041 that is also is in favor of changing marriage to include not a man and woman, but two adults. A deputy from Central Florida is speaking against that resolution. But it's clear that at least in this room, those that favor the Episcopal Church ratifying same gender marriages are in the majority.

With women knitting in the back row, testimony continues over the blessings of same sex unions. There are so many resolutions that it's been difficult for me to zero in on just which one will rise to the top. It could be that the golden start is C019. They are now talking about LBGTI people in C004. There are a few deputies who are speaking to biblical principles, but they are clearly outnumbered. More of the resolutions are being put forward that include deveoping rites for same sex marriages.

It's clear that Rowan Williams implored the General Convention to remember that the Episopal Church is part of a global church and to put aside selfishness. It's quite clear, however, that the even the majority of the people in the room are in favor of applying these innovations to the canons of the church.

We do keep hearing the stories, like the stories that are being written in the personal narrative seminars. I don't see how this General Convention cannot overturn B033.

I see Phillip Aspinall, Anglican Archbishop of Brisbane, Australia, sitting near me. He was the spokesman for Rowan Williams at the Lambeth Conference last summer. He's also on the Joint Standing Committee. He's been sitting here in the back and he just got up and walked out.

More updates on Twitter at: http://twitter.com/BabyBlueAnglica
Posted by Unknown at 5:33 PM

It started, in part, with removing the epistles and gospels from the 1979 Book of Common Prayer. The trend seems to be further distancing from the Biblical foundation of the Anglican Church. Pray for discernment.

TEC's raft is about to launch into rough seas and sure destruction.
If you are still in TEC, pray for mercy for yourself.

Passionately AND effectively ... wow! Thanks! :)